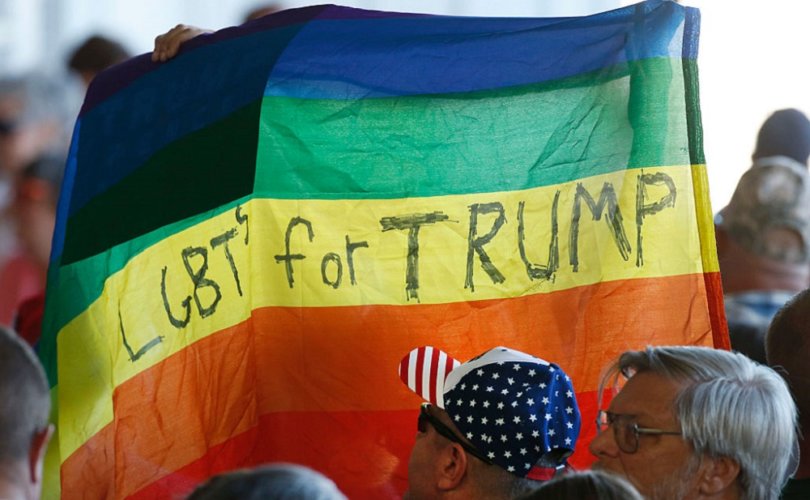 It was a historic broadside against the Deep State and internationalists who’ve been in power for pretty much the last 40 years. I’m sure their blood was boiling as they watched it.

Just days before Grenell, a homosexual, delivered his remarks, he made a video declaring Donald Trump the “most pro-gay president in American history.”

President Trump retweeted the video, stating that it was his “great honor” to receive the title.

The Trump administration has walked a fine line the past several years with its social conservative base and the LGBT community. No one can deny that President Trump is quite possibly the most pro-life president we’ve ever had. He’s also admirably defended the religious liberty of the Little Sisters of the Poor and others. He’s to be praised for those efforts. But, and this is a big but, he has said nothing against the abomination that is same-sex “marriage.” In fact, he’s okay with it.

In 2016, before assuming office, Trump told 60 Minutes he’s “fine” with gay unions. “It’s irrelevant because it was already settled. It’s law. It was settled in the Supreme Court. I mean, it’s done,” he said.

It’s hard to say that if any other Republican had been elected in 2016, they’d be expressing opposition to gay “marriage.” The party has simply given up on it after Obergefell v. Hodges was handed down by the Supreme Court in 2015. I can see a President Ben Carson calling out homosexual unions, but a President Jeb Bush? Or even a President Cruz? I doubt it.

Sadly, it seems that the country, and even religious conservatives, have moved on from same-sex “marriage,” even though we all know that God surely hasn’t and will no doubt exert His vengeance on us at some point for allowing the scourge of sodomy to continue.

Politically speaking, President Trump and his advisers have made the calculation that courting moderate, pro-LGBT voters won’t hurt them in the slightest with his Evangelical and pro-life base. They’re right. Trump has delivered all and then some to those two voting blocs. There’s no way they wouldn’t turn out for him because of Grenell’s short little video.

In my own district here in Michigan, moderate Republican Peter Meijer was endorsed by Grenell just this week. He even sent out a tweet claiming that the GOP “has become a party that celebrates diversity and inclusion.”

So proud to announce our endorsement by @LogCabinGOP with West Mich native @RichardGrenell at our #MI03 Quonset Hut in downtown GR!

While Dems embrace #CancelCulture, the @GOP has become a party that celebrates diversity and inclusion. pic.twitter.com/DfAEzNKkr5

The Trump-led GOP seems to want to give social conservatives laws that restrict abortion and to uphold their religious liberty. Meanwhile, for the LGBT crowd, a Trump GOP will work to see that homosexuality will no longer be viewed or treated as an abnormality. Whether this arrangement can be sustained over the long run remains to be seen.

But some Christians aren’t having it.

Kirk was caught flat-footed. “Like, I don’t care what two consenting adults do … and your hyper-focus on it is kinda … weird.”

Apparently, Kirk has never read the part of the Bible that says men lying with other men is an abomination and that sin makes nations miserable.

Rob Smith, the gay black man who was co-hosting the event with Kirk, was also on stage. He didn’t have a good answer to Riley’s question either, opting to throw a temper tantrum and hurl empty LGBT talking points back in his face.

The altercation didn’t end there. Popular Twitter personality Benny Johnson, who works for Kirk, slammed Reilly for his remarks, scurrilously claiming that his question was “homophobic.”

Social conservatives are going to see more of these sorts of baseless attacks on Biblical marriage if they let moderates like Meijer and Kirk and gay men like Grenell run the show.

It’s up to grassroots Christians to ensure that Republican politicians will reverse homosexual “marriage” the same way they’ve successfully forced them to take up the cause of overturning abortion.

If religious Americans are simply content with getting pro-life laws, so be it. In truth, they need to strive for much more. If they don’t, the realignment currency underway on the political right will continue to push for the acceptance and normalization of homosexual behavior in the United States and across the world.