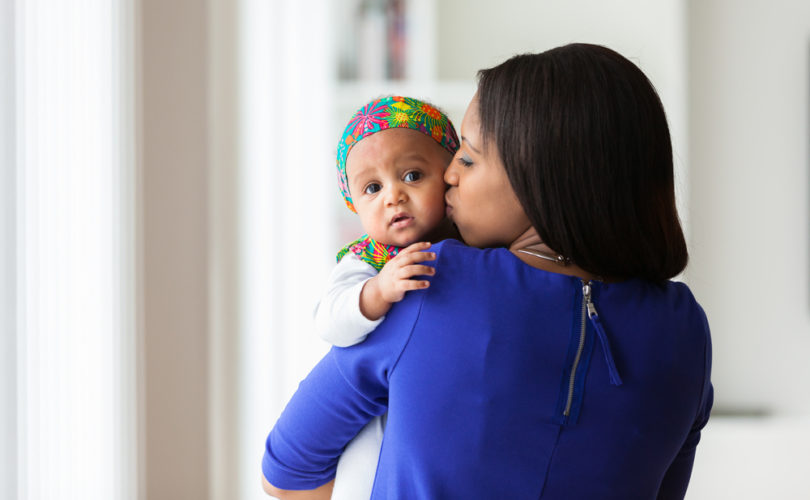 June 13, 2018 (LifeSiteNews) – It may rank as one of the most unintentionally sad headlines I’ve ever read, and it showed up in The Telegraph last week: “Baby born to transgender man could become the first person without a legal mother.” A transgender man — a biological woman — is in court insisting that to refer to a legal man as a “mother” is a violation of human rights, and that since society has “evolved,” the birth certificate should instead refer to the person who gave birth to the child as a “father.” After all, in today’s society, “It is an accepted fact that a female who transitions to male may in law maintain the ability to conceive and give birth to a child,” according to the barrister in charge of the legal team.

But it is not the utter moral confusion of this whole mess that I find depressing, or even the ridiculousness of this next skirmish in the war on reality. It is the fact that this story is another indication that our culture is rejecting the idea that having a mother is essential to a child’s well-being, and denying that mothers have a unique role to play in their children’s lives. It would have been unthinkable, a very short time ago, to state that children do not need a mother. But that is exactly what LGBT activists are explicitly claiming — and they are taking that assertion to court.

Many people do not realize that when LGBT activists like Dan Savage claim — as he does — that a child is just as well served being raised by two men than by a mother and a father, that a fundamental part of this claim is that mothers do not bring anything unique to the family arrangement, and that a man can fulfill their role just as well. Savage, in responding with visible anger to a commentator on a panel who asserted that women are often better at nurturing children several years back, dismissed the idea that a person’s “genital sets” had anything to do with their ability to raise a child — as if differing genitalia were the only difference between men and women.

Savage and his fellow LGBT activists are saying, essentially, that there are no real differences between men and women. One of the reasons Dr. Jordan Peterson has attracted so much hatred is because he consistently and scientifically rebuts this assertion, which is fundamental to much of the progressive worldview. But does anyone really believe this? Does anyone actually think that two people of the same sex can complement each other in parenthood the way a man and a woman can? Do they honestly believe that mothers are basically fathers, but just without male genitals? Sure, a few people like Dan Savage have to believe this, to justify their own selfishness. But does anyone else?

I confess here that I grew up with an extraordinary privilege: A happily married mother and father. I’ve long believed that this is the real “privilege” in our society, one that has nothing to do with race or what-have-you: Growing up in a stable home with loving parents. My mother, of course, is the parent I have the very earliest memories of, and I remember thinking once, as she played Frank Mills’ The Happy Song for us kids on a warm summer evening when I was very small, that nobody was more perfect and beautiful than she was. The idea that anybody would (or could) want to do without something so wonderful as a mother is something that still boggles my mind.

I understand that there are some people who did not receive the same privilege that I did — people who lost their mothers, or those who grew up in broken or blended families with all of the accompanying complications. But that is not what this issue is all about. This is about our society making a deliberate decision to enshrine into law the idea that motherhood is unnecessary, and to dispense with the idea that every child should, ideally, have a mother and a father. Our culture has changed, yes. But to state, through our legislative bodies and our courts, that mothers or fathers are unnecessary and that men and women are interchangeable — this is nothing short of robbing generations to come of something that we all know, deep down, children have an inherent right to.

I do believe that if people really stop to think about this assertion — this idea that mothers are unnecessary — that they will agree with me that it is ridiculous. Most people have never really stopped to consider the fact that this is the underlying claim of activists like Dan Savage when they claim that two men can do just as good of a job. But we all know, instinctively if not intellectually, that mothers are essential, and that they always have been. This fact is stamped into our minds, onto our history, and prevalent in many of our great stories. It is mothers, after all, that men cry out for when they are dying on the battlefield. It is mothers who sustain their children with their bodies, bring them into this world, and give them life. And that is why many men have, throughout history, echoed the words of the great Abraham Lincoln: “All that I am, or ever hope to be, I owe to my angel mother.”