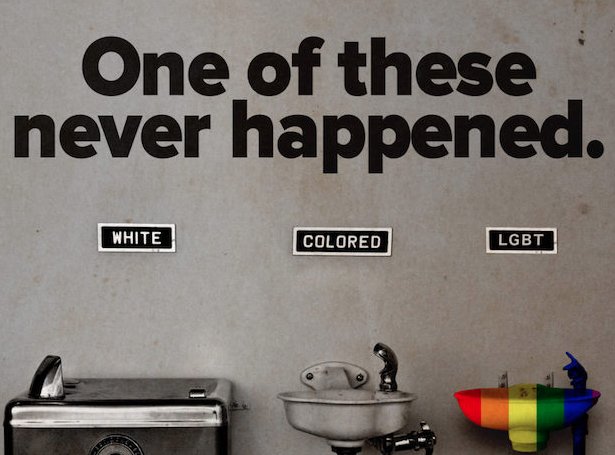 December 8, 2017 (LifeSiteNews) – No matter how many times the leftist ACLU wants to compare LGBT activism to the blood-bought civil rights of black Americans, there is no comparison. Gay is not the new black.

Jack Phillips, a Christian cake artist who owns Masterpiece Cakeshop in Lakewood, Colorado has run his business for years according to his religious convictions. He is a gentle, kind and loving soul. He serves everyone, just not every event. In 2012, Jack politely declined to create a custom cake for a same-sex wedding for Charlie Craig and David Mullins. They claimed “humiliation” and “discrimination”; the ACLU was on it like icing on…uhhhh…cake.

Having no real substantive argument against someone’s freedom of expression and religious freedom, LGBT organizations decry the exercise of First Amendment rights as an act of modern-day Jim Crow. Cue the hijacking of the civil rights movement. Of course the ACLU, the New York Times and many other liberal fake news outlets repeatedly invoke the 1968 Piggie Park Supreme Court case. Owner Maurice Bessinger, an unrepentant racist, refused to allow black people to eat at his drive-in and sandwich shop restaurants. As always, the Left loves comparing apples with pizza. Gay customers have always been welcome in Masterpiece Cakeshop and could buy anything in his establishment. He didn’t reject Craig and Mullins for “who they are,” but for what a singular event means.

Never having faced the actual dehumanizing, violent and often fatal discrimination that African-Americans endured throughout our nation’s history, LGBT activists continually co-opt experiences that are not theirs. LGBT individuals were never enslaved. They were never denied citizenship. They were never attacked and lynched by the KKK. They never had to ride in the back of the bus, or sit in the balcony of a movie theater, or be denied a seat at a lunch counter. They were never denied the right to vote, forced to pay poll taxes or take literacy tests. It’s why many African-American leaders (including Dr. Alveda King and those who marched with her uncle, Dr. Martin Luther King) reject the co-opting and say “We Got Your Back Jack”.

But LGBT “discrimination” can be such an arbitrary thing. Lambda Legal, in its amicus brief for the case, sounded the alarm about how “widespread” it is. The LGBT organization says it has a database of 1,000 claims of “discrimination” from people who have called into their offices. When you read the fine print, these dubious reports were collected over a period of 9.5 years. That equates to less than nine instances per month, in a country of over 320 million people. Keep in mind, examples of “discrimination” include being referred to in the wrong gender (aka some “non-binary” individuals want to be referred to as “they” instead of “he” or “she”). Racism against the immutable characteristic of pigmentation was systemic, government-sanctioned, and undeniably pervasive as it impacted millions of people of my complexion every single day.

Jack Phillips has already lost 40% of his business because he had to stop making wedding cakes to avoid violating the unconstitutional ruling of the Colorado Civil Rights Commission. He’s losing his livelihood and could lose his entire business if the ACLU prevails at the Supreme Court. Barronelle Stutzman, a florist in Richland Washington who is also represented by ADF, is being sued by those (hate-free, of course) LGBT plaintiffs, the state, and the ACLU for everything she owns including her business, her house, and her entire life-savings. She’s a soft-spoken, love-filled grandma who is being sued by a homosexual customer that she’s gladly served for 10 years. She just couldn’t conscientiously participate in his same-sex wedding.

LGBT activists have turned victimhood into an art form, one they want to freely express. LGBT groups and their corporate allies have launched an #OpenToAll campaign that absurdly and falsely characterizes Masterpiece Cakeshop as some Jim-Crow-No-Negroes-Allowed scenario. Just stop already.

The ACLU claims that allowing the free exercise of religion is a “license to discriminate.” The reality? A Supreme Court win for Jack is a win for all Americans and gives a license to celebrate the Bill of Rights.

Shouldn’t the First Amendment be #OpenToAll? It’s not hateful to disagree; it’s human. Sadly, too many believe their own hashtag hype. It’s not #LoveIsLove; it’s #GodIsLove. It’s my motivation for illuminating truth.

My wife Bethany and I were honored, through The Radiance Foundation, to host the #JusticeForJack rally at the Supreme Court this week. We were joined by ADF, Family Research Council, Jews for Religious Liberty, Concerned Women for America, Frederick Douglass Foundation, Heritage Foundation, CURE (Center for Urban Renewal and Education), Focus on the Family, US Conference of Catholic Bishops, Delaware Family Policy Council, Liberty Counsel, (MLK-founded) Southern Christian Leadership Conference, members of Congress (such as Senator James Lankford) and hundreds of other state policy councils and freedom-loving Americans from across the country.

Marriage is a sacred thing to the majority of the world. It’s not some trivial event. Next to religion, it’s the most important institution in any society. There are numerous events or themes Jack chooses not to provide his artistic talents for: bachelor parties, divorces, Halloween, anything anti-American, anti-LGBT messages or customized cakes that celebrate an unbiblical model of marriage.

Jack epitomizes courage. He won’t live out his faith in a closet. No American should. The free exercise of religion means our rights of conscience are not confined to our homes. Oh, the palpable irony that the Trumpeters of Tolerance demand their sexuality be universally celebrated and on full display while trying to fine, jail, bankrupt and shut down anyone who dissents.

LGBT “equality,” in all of its co-opted rainbow glory, doesn’t trump our actual and foundational Constitutional freedoms.

I’m a creative professional. I don’t want politicians or judges dictating where and when I must provide my artistic expression. If the government, whether local or federal, can control what we say creatively, they will eventually control what we say, period.