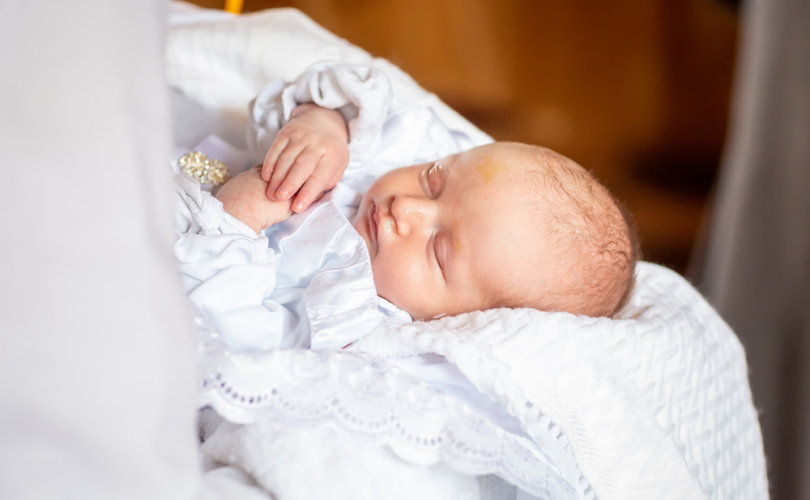 April 2, 2020 (LifeSiteNews) – Much has been written about the lack of Holy Communion and the Sacrament of Penance (Confession) in the current public health situation, but I’d like to say something about the Sacrament of Baptism. This will only affect a small number of people, but it has a particular interest because in principle, as we are all taught in Catechism, anyone having the use of reason can baptise. You can’t baptise yourself, but if you’ve not been baptised you can get your atheist cell mate to baptise you before you are thrown to the lions or whatever, if he follows the correct procedure.

This is clearly not the full story, however, since Catholics have found themselves in situations of persecution where priests were simply not available, sometimes for decades, like Japanese Catholics in 17th century. Readers may remember the classic film The Magnificent Seven: one of the features of the Mexican village that the seven gunmen go to protect was that the priest only visited them once a year. This was indeed the situation for many remote Mexican communities in that era, and historical parallels are not lacking. In the Catholic Highlands and Islands of Scotland, for example, for much of its history priestly visits were not as frequent, or predictable, as that.

How long should one be prepared to wait, as a parent, before private baptism is the best option? The question is made pressing by the Code of Canon Law, which informs parents that they have an obligation—not just an option—to have their children baptised in the ‘first few weeks’ (Canon 867 §1). This flows from Divine Law, expressed by Our Lord Himself, ‘Go and make disciples of all nations, baptising in the name of the Father and of the Son and of the Holy Ghost’ (Matthew 28:19).

The canonist Dr Edward Peters in a recent blog post noted the advice of commentaries on Canon law on this point, one of which specified that parents should not be waiting more than month for a priest to baptise their infant. If it’s going to take longer than that, they should arrange a private baptism by a lay person. So sorry, Cardinal Cupich, you can’t insist that private baptisms, even in the case of “emergency,” require episcopal approval.

It is often said that the emphasis on quick baptisms for infants was coloured, in the old days, but the high rates of infant mortality, and of course this was a relevant consideration. Infant mortality is not, however, entirely a thing of the past, and the new Code of Canon law, promulgated in 1983, still insists on the ‘first few weeks’. In the Middle Ages babies were typically baptised two days after birth; standard advice before the Second Vatican Council was that baptism be done within two weeks.

On the other side, it is even more often said that the ‘old days’ were characterised by an excessive emphasis on the prerogatives of the clergy, and there is some truth in this as well. It is therefore all the more striking that Dr Peters’ commentary say that parents should not wait too long for a priest. If we have freed ourselves from clericalism, if the laity are now to be regarded as ‘adults’ when they used to be regarded as ‘children’, what excuse do we have for insisting that priests perform our baptisms when this would necessitate a long delay?

I fancy resistance to this idea comes from two directions, one reasonable and the other less so. The reasonable cause for hesitation derives from the fear that private baptisms by lay people may not be done correctly or recorded as they should be. Were this to happen, there will be confusion and bother further down the line, for example when the child is to be Confirmed. This is fair enough, but the solution is to get people to do it properly, with witnesses if possible, and to register it immediately with the local parish, as is explained here.

The less reasonable source of resistance is the idea that baptism just isn’t very important, and that it essentially makes no difference if an infant is unbaptised for a year or so after birth, and indeed what difference could it possibly make to a merciful God if an infant dies without baptism? This comes down to a denial of the supernatural reality of the Sacrament. Of course baptism makes a difference: it washes away Original Sin. This means that it raises the child to spiritual life, the life of grace. No Catholic should brook unreasonable delay in arranging this for their children.