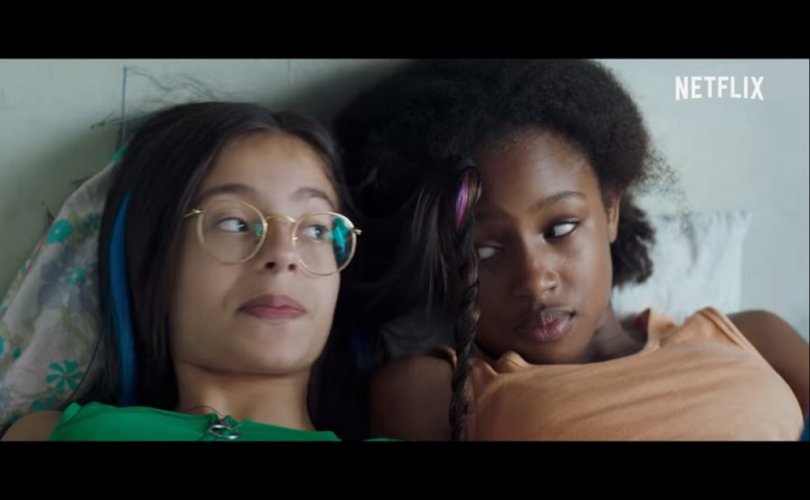 October 15, 2020 (LifeSiteNews) —Rather than apologize for the scandal caused by the Netflix movie “Cuties,” the company’s CEO, Ted Sarandos has dug in his heels, blaming American viewers rather than taking responsibility for the content.­­

As reported by Deadline, Sarandos said, “It’s a little surprising in 2020 America that we’re having a discussion about censoring storytelling. It’s a film that is very misunderstood with some audiences, uniquely within the United States.”

What a telling statement.

First, Sarandos is surprised that, “in 2020 America,” there is outrage over the sexual exploitation of young girls.

Is this supposed to be something we graduate from? Should our concern for the wellbeing of children dissipate as the decades go by? Does the passing of years lessen our pain when we see young girls gyrating in grossly sexual dance moves? Is this something that should no longer bother enlightened Americans? Should sexual morality be consigned to the Stone Age?

Second, we did not misunderstand the movie.  We get the fact that the movie speaks against the sexual exploitation of children. But, as we have stated repeatedly, you do not sexually exploit children to convey the message that sexually exploiting children is wrong.

As I wrote on September 18, “The Babylon Bee headline is satirical, but, based on the logic of Netflix, it might as well be true: ‘New Netflix Movie Actually Murders Puppies To Teach That Murdering Puppies Is Bad.’ Or, to move from satire to reality and create our own headline, ‘New Netflix Movie Actually Exploits Young Girls Sexually To Teach That Sexually Exploiting Young Girls Is Wrong.’” (For my previous articles on the movie, see here and here.)

Third, the fact that the movie played well at Sundance, which no one points to as a bastion of high moral standards, is totally immaterial. As Indie Wire noted (and I previously cited), “The Sundance Film Festival has been shocking audiences — and launching careers — for years.” An early Sundance winner was the 1989 movie “Sex, Lies, and Videotape.”

So much for “Cuties” provoking no such controversy at Sundance. That would be like saying, “The Zombie Film Festival watched the latest episodes of ‘The Walking Dead,’ and really enjoyed the shows. No one said a word about the violence and the gore.”

Stephen Colbert's mockery of Christ is not only not funny, it's also cowardly.

Over the past three month, the CBS late-night show which bears Colbert's name has resorted to mocking Jesus Christ in irreverent political cartoons.

This petition demands that CBS (the network which hosts Colbert's show) put a stop to this mockery of Christ and anti-Christian bigotry.

The cartoons' primary purpose is to ridicule Vice President Mike Pence by poking fun at what some may see as a discrepancy in his claiming to be Christian while supporting policies which those people see as 'un-Christian.'

But, the problem is that this political satire achieves its end by depicting Christ as both vindictive and silly.

And in the second cartoon which aired at the end of August, the Colbert show depicts Christ as 'crashing' Mike Pence's speech at the Republican National Convention.

Just after Pence declares that, "America is a nation of miracles," Christ is depicted as descending to Pence's podium and disgracefully identifying Himself to be "the miracle guy..."

On top of this irreverence, the rest of the video depicts Christ as a silly God, Who changes Pence's microphone into fish (obvious reference to Jesus' miracle of the multiplication of loaves and fishes), and then ascends into Heaven shouting, "That's right. Jesus eats weird stuff. Got it!?!"

Mocking what other people hold dear is always in bad taste. But, mocking God, Himself, for the sake of a few laughs, is unacceptable.

And, this fact just proves that Colbert and co. are acting like cowardly bullies when they use silly depictions of Christ to ridicule the Vice President.

In essence, they selected a group who they see as weak (Christians) and ridiculed them and their God.

Please SIGN and SHARE this petition which demands that CBS put a stop to Colbert's irreverent depictions of Christ.

Third, it is instructive that Sarandos compared the reaction to “Cuties” in Europe to the reaction in the United States.

Thank God that we still have a conscience about these things. Thank God that we’re still disturbed by the thought of young girls being taught these dance moves, let alone filming them in front of an audience as well as being involved in other, inappropriate scenes.

I’m glad that our reaction to “Cuties” is different here than in Europe.

Interestingly, Sarandos didn’t compare the reaction of American viewers to that of viewers in other countries where Netflix airs. I wonder what Muslim viewers think of the movie in countries like Jordan and Egypt? (Oh wait. Perhaps it’s not airing there. After all, the movie takes a swipe at religious Muslims too.)

And how big a screening is the movie getting in the continent of Africa? How are the viewers enjoying it in countries like Cameroon and Sierra Leone? What kind of reception is it getting in Singapore and Hong Kong? And how about a more conservative European country like Hungary?

I don’t have definitive answers to all of these questions, but I have some educated guesses. That’s why Bloomberg announced on September 13, “Netflix Won’t Cancel ‘Cuties’ at Home, But Might Have to Abroad.”

As the article by Lucas Shaw explained, “Netflix has delayed the release of the movie in Turkey, and has yet to provide a new date.”

“As Netflix has introduced its service to more than 190 countries, it has said people all over the world watch the same kinds of shows,” he continues.

But Shaw goes on to note that “Governments in Singapore, Saudi Arabia, New Zealand, Vietnam and Germany have all asked Netflix to take programs down due to objectionable content.”

It looks like Sarandos was quite selective in his comments, comparing the American response to “Cuties” to the response in Europe, as if Americans of all people worldwide have a problem with the content. The reality is that the movie could not even air in some other parts of the world.

Either way, Sarandos actually paid us Americans an unintended compliment. We still know how to blush. That’s a badge of honor that we should wear proudly.