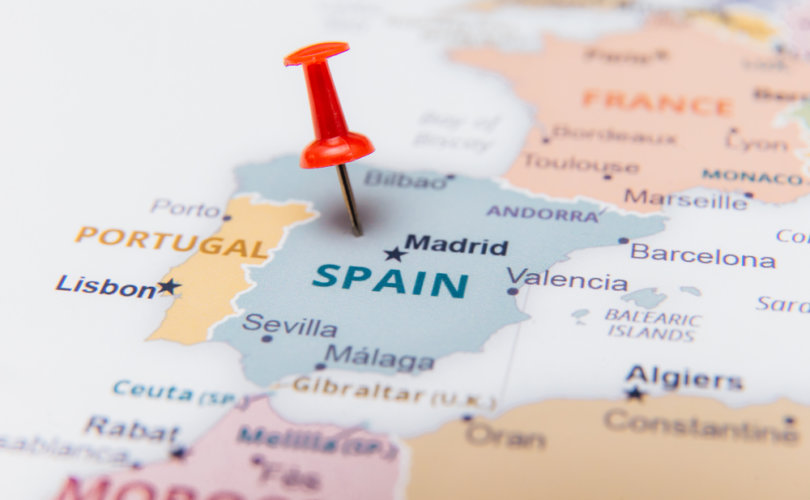 January 12, 2021 (LifeSiteNews) — Spain registered its lowest number of births ever in 2019, according to final demographic data for that year published recently by the official statistics agency, INE. Only 359,770 babies were born, 13,007 (or 3.48 percent) less than the previous year.

Of these, some 260,000 births were native Spanish women, with immigrant mothers or mothers of foreign descent accounting for almost 28 percent of all births. 418,703 deaths were registered over the same period, meaning that Spain’s population is not only shrinking — and has been since 2013, apart from immigration — but that the proportion of inhabitants with a foreign background is growing thanks to higher fertility in this population group.

One in five pregnancies were “terminated” by legal abortion in Spain in 2019, a historical high: 21 % percent of unborn babies were killed, as well as their potential descendants.

As a nation, Spain has been in the process of reaching “demographic winter” since 1981 when for the first time its fertility rate decreased under 2.1 children per woman, which is the generation replacement limit in developed countries, at 2.04. It would never recover: ten years later, it had gone down to 1.31 child per woman, plummeting even lower to 1.13 in 1998 before a slow but slight improvement starting in 2000 that newer reached higher than 1.44 (in 2008).

In 2016, the fertility rate was still slightly higher than today, at 1.34 (410,583 births). It has continued its descent since then and is expected to fall even more in 2020 as a result of the COVID-19 crisis which hit Spain particularly hard, both as to the number of deaths attributed to the disease and as to crippling lockdown measures and subsequent economical duress.

The last time Spain had such a disastrous birthrate was in 1941, just after the Civil War — but at the time, Spain’s total population was just under 26 million, while today it is almost 47 million (of which, to be sure, a larger proportion is beyond childbearing age as average age increases).

According to estimates Spanish women gave birth to similar numbers in the 18th century — with a population five times smaller than today. Francisco José Contreras, a professor of the philosophy of law at the University of Seville and deputy of the conservative “Vox” movement in the Spanish parliament, underscored these facts in an op-ed for gaceta.es, also noting that in the 1960s, close to 700,000 births were registered in Spain every year with a population two thirds lower than today.

Among women of Spanish extraction, the birthrate has fallen most spectacularly. In 2019, their fertility rate dropped to 1.17 children per woman, meaning that the generation to which they are giving birth will be only slightly more than half the size of their own. Overall, births in Spain represented 44 percent less than would be necessary to replace the present generation.

The “true existential threat to our country,” wrote Contreras, “is not a hypothetical rise of temperatures of two or three degrees Celsius by 2100 (that would imply a sea-level rise of only 60 centimeters that could easily be managed by our grand-children), but socio-economical collapse through lack of contributors and man-power by 2035.”

Spain is facing an impressive increase of pensioners as baby-boomers of the 1950s, 1960s and early 1970s, the most numerous cohorts in Spanish history, are reaching retirement age. Dwindling generations of later years will have to pay for their upkeep and health costs. While the COVID-19 crisis has led world leaders to promote state-funded (that is, tax-payer-funded) healthcare, it is already clear that the socialized “welfare state” will be gravely compromised in aging societies such as Spain.

Contreras observed that “climate change,” “male chauvinism,” “homophobia” and “racism” are routinely represented as Spain’s main problems. Official surveys of the Spanish population’s foremost concerns quote these and other reasons to worry about the future, but “demography is never included,” he noted.

When the authorities address demographic problems, he added – as they did in a “National Strategy” developed in 2019, they talk about internet and cellphone access, administrative simplification in the smaller municipalities and women’s freedom of residence – and, of course, “managing legal and orderly migration, to be deployed over the whole territory.” Rural depopulation is seen as a problem, the birth dearth is brushed over.

Contreras’ own party, Vox, has repeatedly proposed the adoption of political measures to promote childbearing — only to face backlash from other parties, sometimes even from the supposedly conservative Partido Popular. Asking for support for families and young mothers is seen as “male chauvinist” and wanting to “relegate women to a merely reproductive role.” Vox is also slammed for “racism” for “opposing immigration as a panacea,” Contreras remarked.

“Government as well as the larger part of society are prisoners of an ideological grid that allows ecological sustainability to be conceptualized as a problem, but not demography; you can show concern for the Iberian lynx but not for homo hispanicus,” he said.

In fact, the only answers offered by the mainstream Spanish political establishment are “more feminism and more immigration,” although feminism sees childbirth and rearing as “biological slavery.” Women’s competing with men in the workplace, a feminist enterprise, “is what brought us to our present demographic situation,” added Contreras.

He also observed that immigrants cannot fix the funding problem that is already faced by the Spanish welfare state immigrants (from South America and, increasingly, from Islamic African countries): While they make up 12 percent of the total population in Spain, they only accounted for 3 percent of personal income tax collected in 2016.

Immigration brings also with it cultural and religious differences. No less than 10 percent of babies born today in Spain have a Muslim father, according to the Fundación Renacimiento Demographico, recalled Contreras.

As fewer Spanish women are giving birth to less babies, and the number of regularly practicing Catholics for the first time dropped lower — at 22.7 percent — than that self-proclaimed atheists and agnostics (29.1 percent) according to a 2019 survey, secularized Spain seems to be losing its reason to live. The “vacuum” is being filled by more vigorous populations whose relative importance per individual with regard to the total population is increasing.

Spain is the only nation in the world that reversed an established Islamic take-over — it took the Spaniards over seven centuries fighting that culminated in a definitive victory under the command of Isabel the Catholic in Granada in 1492. In refusing the future, the formerly great Catholic nation is likewise turning its back on history.