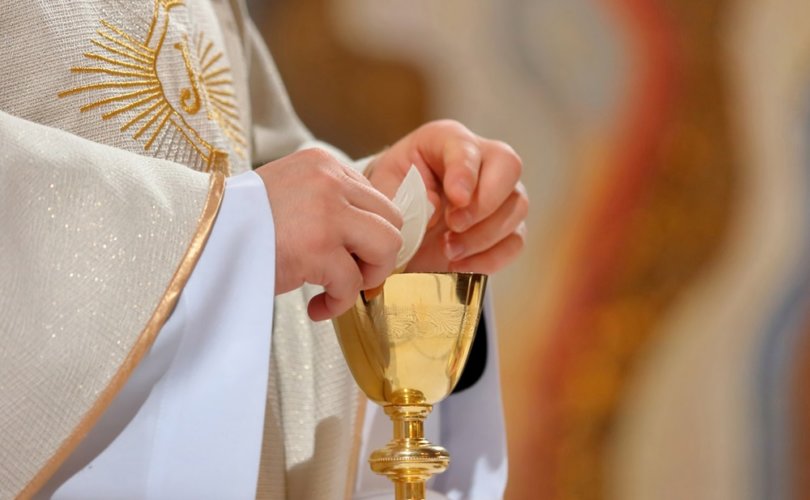 September 3, 2020 (LifeSiteNews) — A Spanish Catholic who was refused Holy Communion on the tongue, together with his wife, has received a formal letter of apology from his local bishop, who confirmed that whatever sanitary recommendations are in place for the prevention of the spread of the Wuhan coronavirus, receiving the Host directly in the mouth cannot be forbidden.

The incident took place on July 26, when the lay Catholic and his wife presented themselves for Communion in the church of Saint Ignatius of the Salesians in Ciudad Real, 200 km south of Madrid. The celebrant refused to allow the couple to receive Holy Communion kneeling and on the lips, on the grounds that COVID-19 rules say the Host should be given in the hand.

The husband wrote to the bishop of Ciudad Real, Gerardo Melgar, saying his and his wife’s rights had been violated.

The diocese answered on August 20, 2020, with a remarkably courteous letter affirming the faithful’s right to receive Communion reverently. Here below is LifeSite’s translation of the letter:

Dear Sir, in the Lord,

I am pleased to acknowledge receipt of the letter addressed to His Excellency Gerardo Melgar Viciosa, Bishop of Ciudad Real, Prior of the Military Orders of Santiago, Calatrava, Alcántara and Montesa, dated July 29, in which you make known that you consider your rights as a member of the faithful of the Church to have been violated because you and your wife were denied communion on the lips in the Eucharist celebrated on July 26, 2020, at 10:30 am, in the Church of San Ignacio (Salesians) in Ciudad Real.

His Most Reverend Excellency has entrusted me with the task of expressing his apologies for such a situation, and has also communicated with the rector of that church so that something similar does not happen again, because although it is true that the health emergency in which we find ourselves makes it advisable that the faithful receive Communion in the hand, as a safety measure to avoid spreading Covid-19, at no time can it be forbidden to do so on the tongue, if the faithful who are to receive it so desire.

I take this opportunity to express to you the expression of my consideration and esteem in Christ.

Chancellor-Secretary General of the Bishopric of Ciudad Real

This vindication of the layman’s protest — which must have been courteously worded to elicit such a response — makes very clear that the Church cannot change the rules for giving the Eucharist for whatever reason, including sanitary requirements whose objective is in itself good: preventing the spread of a contagious disease.

It is a way of recalling that the Church has rights that transcend those of the civil authorities, who are not competent to change her way of doing things, in particular with regard to the Sacraments.

Bishop Gerardo Melgar, according to the letter, personally contacted the priest who refused to give the Host on the lips and gave him clear orders not to recommence, which means that the diocese did not merely pay lip service to the layman who asked for his rights to be respected.

It must be understood that in this case, the layman’s request was not a mere demand to his own advantage, but an affirmation of the right to show due veneration to the adorable Body and Blood, Soul and Divinity of Our Lord.

The letter’s insistence that the current “health emergency” would make it “advisable” to distribute Holy Communion in the hand is regrettable, in that it is not founded on scientific fact. No studies have been made justifying the decision by bishops’ conferences and individual bishops and other religious authorities to ban Communion on the tongue in so-called application of governmental sanitary rules.

Instead, last June, 21 doctors from Austria, quoting the professional opinion of an Italian professor of medicine, gave a list of reasons showing that the reception of Holy Communion kneeling and on the tongue is “safer than hand Communion.” This is particularly the case in the Tridentine rite, which includes “barrier measures” such as requiring the priest to hold thumb and forefinger joined together from the moment he has consecrated the bread, using them only to touch the Host from then on until the moment when he once again purifies his hands.

They also noted that when the faithful kneel to receive Communion, contamination by droplets is less likely because the priest’s face is not at the same level as that of the communicant, and contamination comes mostly from sullied hands.

Dr. Didier Raoult of France is also of the opinion, following his experience with the Wuhan coronavirus, that COVID-19 is mostly spread by hand and insists that hand-washing is more effective to avoid contagion than wearing a mask.

[I]n a communication of the Congregation for Divine Worship and the Discipline of the Sacraments of the Roman Catholic Church of April 3, 1985, we read: ‘The Apostolic See maintains the traditional method of administering Communion throughout the Church …’ The same Congregation affirmed in 2009 that the faithful always have the right to receive communion on the tongue and that it is not allowed to refuse it. No exception (such as a pandemic) is mentioned here.

The 2009 note from the congregation was written as a response regarding the HIN1 flu epidemic.

A layman in France obtained a similar result to that of the couple in Spain when he complained that he had been refused Communion because he did not want to receive the Host in the hand, invoking canon law and the above response of the Congregation for Divine Worship. Receiving Communion on the tongue follows the regular prescription of the Church, reception in the hand being allowed only through an “indult,” or exception, however widespread this may be.

This is not the first time that the diocese of Ciudad Real in Spain has been confronted with the faithful’s refusal to receive the Host in the hand. In 2017, the progressive Catholic media outlet Religión Digital told the story of a lady who was refused Communion thrice in the rural parish of San Carlos del Valle because she did not want to receive the Host in the hand.

The refusals were followed by a public demonstration joined by about 100 parishioners asking for the diocese to replace their parish priest. Fr. Miguel Palomar ended up asking for forgiveness from the woman at the end of his Sunday sermon, promising to amend: it would “never happen again,” he said.

The COVID-19 crisis is giving many bishops and priests a pretext to impose Communion in the hand. But it is clear that the imposition is unlawful.

COVID deaths in Spain have decreased steadily since a peak of 877 in one day at the end of March. Since the beginning of June, they have varied mostly between 0 and 10, with a few moderate highs of around 50.