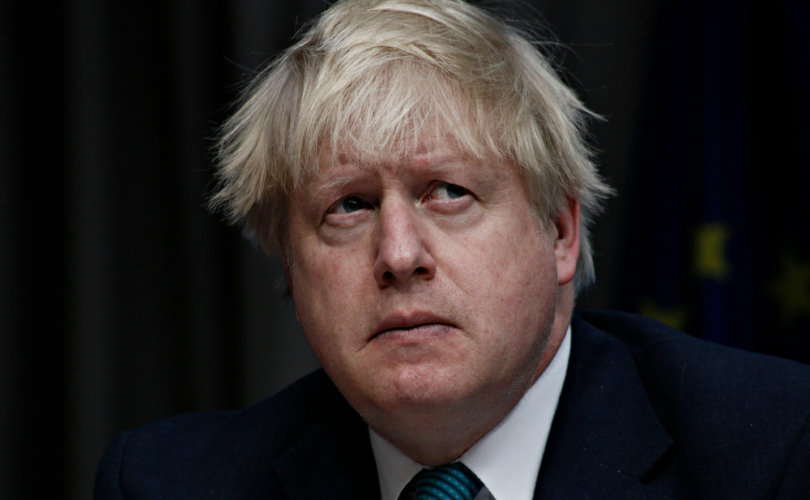 Boris Johnson, then Secretary of State for Foreign Affairs, at a press conference in Brussels, Belgium on Apr. 05, 2017.Alexandros Michailidis / Shutterstock.com

September 22, 2020 (LifeSiteNews) – After months of leaks and confusion, we may finally be on the verge of discovering what the U.K. Tories are planning to do about former Prime Minister Theresa May’s long-awaited transgender reforms.

Initially, the U.K. minister for women and equalities Liz Truss indicated that they would be putting forward a ban on sex-change surgeries for minors as well as instituting protections for single-sex spaces. But last month, the Daily Mail reported that Boris Johnson’s live-in fiancée Carrie Symonds, more than twenty years his junior, was the influence behind Johnson’s “cold feet” on the matter, according to Tory MPs. Downing Street strongly denied the allegations.

Now, The Sunday Times is reporting that Theresa May’s plans to allow transgender people to simply identify however they wish will be officially abandoned this week—while at the same time, the government will make it far cheaper to legally change your gender. (Currently, it costs £140.) The Times could not confirm whether the anticipated protections for single-sex spaces will still be going ahead, although Equalities Minister Liz Truss, who faced major backlash as she worked on reforms to the Gender Recognition Act, promised that there would be no “rollback” of “transgender rights.”

The bad news is that Boris Johnson has backed away from initial plans to ban sex-change surgeries for children under 18. This is a much-needed move, as children are being given life-altering drugs and surgeries before they are legally allowed to vote or drive, and as the BBC has now reported multiple times, the National Health Service’s Tavistock Clinic has been plagued with scandal. Many employees have quit in protest, claiming that children were being rushed into transition for ideological reasons. But according to Mermaids, a trans children’s group, Liz Truss recently sent them a letter assuring them that there would be no changes in this regard.

As usual, Big Business has allied with LGBT activists to put pressure on the government. According to Forbes: “The leaked reforms today follow months of protest from international businesses, trade unions and the medical profession’s body the British Medical Association. This has all happened alongside concerted grassroots efforts from LGBTQ groups, actions which seemed to delay previously planned announcements...The move to stifle and, as is now expected, to drop progressive transgender rights reforms drawn up by the previous Conservative administration, is no surprise. It’s never been a priority for the current administration.”

The reality is that Boris Johnson has all but gutted his initially bold plans to protect single-sex spaces and underage youth. Whether it was his fiancée, pressure from LGBT groups, or Big Business throwing its weight around, Johnson’s spine appears to have wilted. Johnson isn’t socially conservative, so in some ways this is not surprising. But what makes this apparent climbdown so disappointing is that the transgender juggernaut will continue to flatten everything until somebody, somewhere manages to cancel cancel-culture by simply explaining, calmly and rationally, why this ideology is so damaging to youth. Many academics have already tried, and the Wall Street Journal’s Abigail Shrier has a terrifying but essential book, Irreversible Damage: The Transgender Craze Seducing Our Daughters, detailing why it is so important that somebody, somewhere, start pushing back against all of this.

The problem with secular populist leaders is that they never end up having the guts to do what it takes to actually fight the progressives. They talk a good game, they like to appeal to nationalist sentiment, they thunder a lot about heritage and symbolism and that sort of thing, but when push comes to shove, they’re almost always cowed by the prospect of men in dresses condemning them on morning television. Children are being chemically castrated by quacks, but Boris Johnson is hiding out in his taxpayer-funded home with his millennial fiancée, terrified of the LGBT activists who might come after him. Perhaps he’s writing another book about Winston Churchill in there.