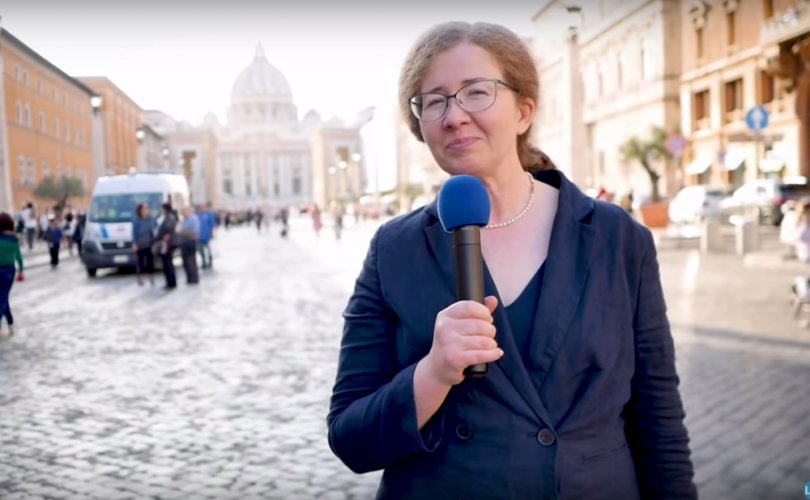 Editor’s note: Our Scotland-based reporter Dorothy Cummings McLean has been sent to Italy to join our Rome Correspondent, Diane Montagna, in covering the Synod for the Bishops of the Pan-Amazon region. A lifelong diarist, Dorothy has volunteered to give readers a glimpse into life off-camera as she carries out what she calls “a dream assignment.”

Pope Francis says that the Synod on the Amazon can be understood only by reading Laudato Si’. Laudato Si’ is opposed to consumerism, and thus it is ironic that I have come to Rome with a backpack of new clothes. The Vatican Press Office has issued a dress code demanding “decorous clothing”: dark suit and tie for men and dark dress for women. My Italian tutor suggested “black and elegant”; I have decided for navy and prim.

The sky over Edinburgh was soft and grey; the sky over Rome was blue and merciless. Dressed half for Scotland, half for Italy, I was glad to shed my navy cardigan sweater on the train to Roma S. Pietro. My flat is a five minute walk from the train station, and I can see the dome of St. Peter’s Basilica if I lean out my living room window.

I was shown to my apartment by the owner’s agent, who wants to know why I can speak Italian. I have the short version of the answer prepared, so I trotted it out: there are many Italians in Toronto, where I was born, and I studied it in high school.

The apartment is in a non-touristy area, and I hear only Italian on the streets. The apartment itself has a unique Italian kind of electrical socket I have never seen before, and I was relieved when I found an adaptor. To charge my Canadian camera battery, I have to fit its charger into a UK charger which fits into a European charger which fits into this crucial Italian charger. Needless to say, I won’t be charging anything when I’m asleep.

Other than that, the apartment is as I expected: a living room, kitchen, bedroom, and bathroom, all with wooden shutters and glass inner windows. There are three bookcases of Italian books in the living-room and a bidet in the bathroom. There is a motley collection of utensils and, crucially, a stove-top coffee pot in the kitchen.

When the landlady’s agent left, I locked the windows and took the train back to Rome’s main train station. I wanted to catch the end of Voice of the Family’s Round Table on the Synod, which I knew was in a hotel near Roma Termini, but I forgot to bring a map.

Thanks to my husband, whom I phoned in a panic, I found the hotel meeting room in time to see a waiter bringing snacks. I hadn’t eaten since breakfast, so the bruschetta and arancini (fried rice balls with melted cheese in their centers) were a Godsend. I was delighted to see Hilary White and Michael Matt of The Remnant newspaper; Christine Niles and Michael Voris of Church Militant, Maria Madise of SPUC International; and John-Henry Westen, Clare Magaad, and Jon Fidero of our own LifeSiteNews.

Jon told me alarming stories of dark shadows and weird noises haunting the monastery where the young folk of the Voice of the Family youth program stayed.

“Spiritual warfare,” he concluded with a mixture of trepidation and relish, and I felt alarmed. By then I was so tired, I didn’t think I would be much good at spiritual warfare.

Sure enough, I was plagued by nightmares about nuclear armageddon.

I woke up at 7:00 a.m. and still managed to miss my colleagues after the Latin Mass celebrated in Santa Maria Maggiore, close to Rome’s Termini station. I blame the news: the arguments over the odd Amazonian religious ritual held in the Vatican gardens were compelling, as was the news that a piece of St. Peter’s Basilica had subsequently fallen from the ceiling, perhaps in protest.

Disappointed, I made my second mistake of the day by deciding to walk to the Vatican Press Office instead of getting back on the train. Naturally I got lost again. This time I was rescued by a map that turned up under my feet outside the Colosseum. I turned up, slightly sunburned and sadly blistered, at the Sala Stampa just after noon.

The Sala Stampa is on the Via della Conciliazione, close to St. Peter’s Basilica. I returned to St. Peter’s around 2:45 p.m. to be ushered with other journalists into Vatican City. I sometimes watch Italian police shows, so I was thrilled to see vans and reporters emblazoned with RAI (Radiotelevisione Italiana).

After some friendly assertiveness, I was counted among the photographers and led into St. Peter’s Basilica through a Vatican city entrance. Declaring that I was from Canada, I toddled after some Cuban reporters before being called back and ordered up a ladder to a press box overlooking the bishops’ section on the left. It wasn’t as ideal as I initially thought, for I was elbowed out of the way by a member of the German press, and he photobombed many of my shots. I probably got a sad kind of revenge, however, by constantly readjusting my tripod, my camera, and my smartphone.

I have often thought that there should be cardinal cards, just as there are baseball cards and hockey cards. They would certainly make my job easier. All the same, there are some faces that are easy to recognize. No offense to Pope Francis, but the face that thrilled me the most was that of the sneakily schismatic Cardinal Marx. I was also delighted to see the wonderful Cardinal Müller. (I took many photos of Cardinal Müller.)

As a matter of sartorial interest, the pressmen around me were indeed all wearing dark suits and ties, and the American presswoman beside me, who loudly decried the lack of female bishops, was wearing a dark dress. She outdid me in formality, however, as she was wearing dark nylons and proper shoes. I was wearing sandals.

Two Congolese women wearing blue and yellow dresses emblazoned with Cardinal-elect Besungu’s face flouted the dress code utterly by climbing into the press box. One waved the  flag of the Democratic Republic of Congo quite vigorously when Besungu was presented with his red hat, and therefore all the photographers turned their cameras on her.

The Consistory service was not a Mass, but rather an opportunity for speeches, prayers, and of course, the receiving of red hats. Each new cardinal knelt before Francis, and then, standing up, embraced him, shared a few words, and then went down amongst the other cardinals to greet them. Occasionally the choir sang hymns of a traditional, classical, Latin-language nature. The service was for the most part a solemn affair, punctuated by the cheering and flag-waving by fans of Cardinal Besungu.

Afterwards I carefully climbed down the ladder and went to the Press Office to be led to the new cardinals. Once there I discovered that I had missed the media chaperone, so I just followed some late-arriving Italian journalists through the x-ray and past Swiss Guards into the Apostolic Palace.

I found myself in a gilded hall with one antechamber and three new cardinals: José Calaça de Mendonça, Miguel Ángel Guixot, and Michael Czerny, SJ. De Mendonça and Guixot held court on opposite ends of the hall, whereas Czerny was in the “salone ducale” to the side. The journalists in front of me rushed to photograph him. I arrived in time to hear him say, in a patient Canadian voice, “He said ‘Thank you,’ and I said ‘Thank you.’” It was clear he meant Pope Francis.

After the journalists had had 15 minutes or so to greet the cardinals, cheerful throngs of clerics and elegantly dressed laypeople were led up the marble staircases into the hall. There were much longer queues for the Portugese poet De Mendonça and the Spanish Islam expert Guixot than for Canadian Czerny when I was lurking about, looking in vain for familiar Canadian Jesuit faces. Two imams turned up to greet Guixot, and the photographers clicked away excitedly.

I walked back to my flat as dusk fell on Rome and then went out to the supermarket around the corner for some supper ingredients. When I returned, I took off my sandals and filled up a laundry tub of hot soapy water for my dirty feet. Then, too tired to write, I watched two episodes of Nero a metà, an Italian police show set in Rome.

I rushed out of the apartment after writing an article on the Consistory and managed to make it to Mass in time for the Gospel. The church was packed. It was standing room only for the 11:00 a.m., and so I stood. The congregation included a Who’s Who of Catholic journalists: Edward Pentin, Diane Montagna, Taylor Marshall, Michael Voris, Hilary White.

Afterwards I went to the Borgo Pio to discuss the opening Mass of the Synod with my colleague Jim Hale. Jim had captured a disturbance in St. Peter’s after Mass on his camera. I watched the video and over lunch near Campo dei Fiori we discussed how best to tell the story. On the way there, we had seen a number of people in feather-headdresses, red face-paint and, yes, running shoes at a taxi stand. I watched with interest to see how the man with the tallest feather crown would fit into the cab, and it seems that the feathers are quite pliable.

Jim filmed me talking about the disturbance and my thoughts about Laudato Si’ in St. Peter’s Square as an international assortment of tourists milled around us and, on at least one occasion, made funny faces at me. Behind Jim and his camera were two soldiers with machine guns, a sober reminder of terrorist outrages in Europe.

Dusk was approaching when Jim finished shooting. I went back to my flat to write, stopping at the handy supermarket for a mineral water and a bottle of wine. I thought I was settled in for the night, but I got a call from John-Henry Westen, returning from a meeting in Umbria. I shut my laptop and met him for an impromptu editorial meeting outside a nearby gelateria.