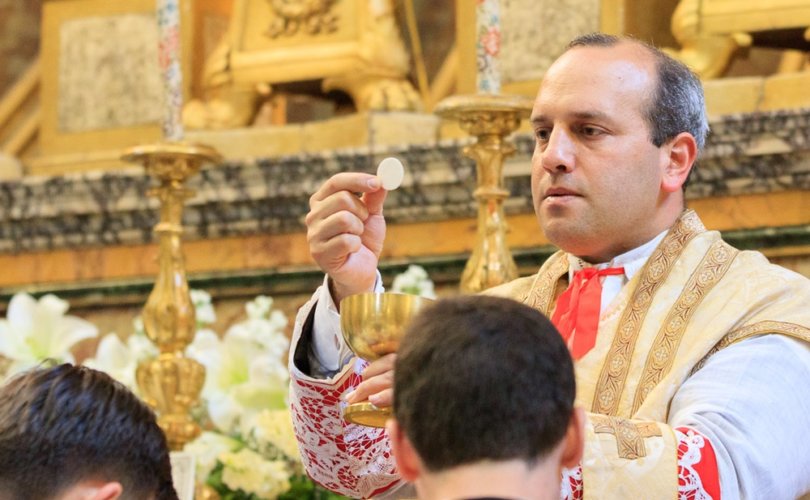 July 30, 2018 (LifeSiteNews) – Among Catholics who still attend Mass, there is a major problem: the collective and indiscriminate reception of Holy Communion, even by those who are not properly prepared and disposed to receive the Lord to their benefit. That this is a major problem was acknowledged straightforwardly by the previous two popes.

Sometimes, indeed quite frequently, everybody participating in the Eucharistic assembly goes to communion; and on some such occasions, as experienced pastors confirm, there has not been due care to approach the sacrament of penance so as to purify one’s conscience. (John Paul II, Dominicae Cenae, 11)

This passage might qualify to receive an award for understatement, but its meaning is unambiguous. Purifying one’s conscience through sacramental Confession on a regular basis—certainly whenever a grave or mortal sin has been committed—is the only way to guarantee that we are showing proper reverence to our Lord Jesus Christ, the Holy One of Israel, really present in the Most Blessed Sacrament as the food for our pilgrimage to heaven.

As the Church teaches, the Eucharist is not a remedy for those whose souls who are dead, but a food for those who, being alive, need to be strengthened for the life of charity. You can give food all day long to a dead man and it will never do any good. In the spiritual life, it is worse: when a spiritually dead man takes the bread of life, he becomes more guilty. And the giving of such food to unrepentant public sinners (such as priests or bishops giving the Lord to politicians who vote in favor of abortion) heaps burning coals upon the heads of both the recipient and the minister. There’s no beating around the bush about this, which is the unanimous teaching of every Father, Doctor, and Pope who holds the Catholic Faith.

Pope Benedict XVI noted in an interview that it disturbed him to see crowds coming to communion at big events at the Vatican, when it was clear that many were tourists or visitors, or otherwise indisposed (e.g., by lack of fasting). He therefore re-introduced the use of kneelers and had the host distributed to kneeling faithful on their tongues in order to remind people that this is a sacred ritual involving the Most Holy, the Sanctissimum:

There is a great danger of superficiality precisely in the kinds of mass events we hold at St Peter’s… In this context, where people think that everyone is just automatically supposed to receive communion—everyone else is going up, so I will, too—I wanted to send a clear signal… This is not just some social ritual in which we can take part if we want to. (The Light of the World, p. 156)

The reason for all this concern is quite simple, expressed with incomparable brevity and clarity by the Council of Trent:

It is unfitting to take part in any sacred function without holiness. Assuredly, therefore, the more that Christians perceive the sacredness and divinity of this heavenly Sacrament, the more must they take every care not to come to receive It without reverence and holiness, especially since we have the frightening words of St Paul: “For those who eat and drink unworthily, eat and drink damnation to themselves, not discerning the Lord’s body” (1 Cor 11:29). Those wishing to receive Communion must be reminded of St Paul’s command: “Let a man examine himself” (1 Cor 11:28). (Session 13, ch. 7)

Given all this, Catholics need to know what it means to “take every care not to come to receive It without reverence and holiness.” What are the conditions for the fruitful and frequent reception of the Most Blessed Sacrament?

The answer was given authoritatively in the 1905 decree Sacra Tridentina Synodus of the Sacred Congregation of the Council, which reflects the mind and will of Pope St. Pius X. This pope, in response to lingering forms of Jansenism that discouraged the faithful from approaching the altar, lowered the age for First Communions and encouraged frequent reception of the Lord. The conditions are as follows:

First, one who wishes to approach the sacred banquet must be in a state of grace, that is, not aware of being guilty of any unconfessed mortal sin.

Second, he must have a “right and devout intention.” The decree defines this as follows: “that he who approaches the Holy Table should do so, not out of routine, or vainglory, or human respect, but that he wish to please God, to be more closely united with Him by charity, and to have recourse to this divine remedy for his weakness and defects.” In other words, the communicant should be conscious of what he is doing and Whom he is approaching (hence, not from routine), and that he is doing it to please the Lord and sanctify his soul through a closer union with Him, not because of what others may be thinking (hence, not from vainglory or human respect).

Third, while it is fitting he should be free of fully deliberate venial sins and any affection for them, he should at least be free from mortal sin—and in such a way that he has the intention of never sinning mortally in the future. This is a particularly important point today, in the huge mess created by Amoris Laetitia. As long as a Catholic intends to continue living in sin, that is, cooperating in an objectively sinful situation, such as a civil marriage with another partner while the original spouse is still alive, he or she may never receive Holy Communion, because there is no intention of not sinning in the future.

Fourth, while it is not absolutely required that a communicant have spent time in careful preparation or that he spend time afterwards in thanksgiving, both of these—the preparation and the thanksgiving—are vital to obtaining the full benefit of reception of the Holy Eucharist. As the decree puts it: “the sacraments … produce a great effect in proportion as the dispositions of the recipient are better.” Apart from the hidden intentions of God who wills to elevate some souls higher than others, it is, on our part, the exercise of a lively faith and the stirring up of actual devotion in approaching the altar and communing with the Lord that accounts for the difference between those whose frequent communions transform them into saints, and those who seem to be left relatively unaffected even by daily contact with the Lord.

In brief, the four conditions for frequent and fruitful reception of Holy Communion are: (1) being in a state of grace, (2) having a right and devout intention, (3) being free from attachment to sin, in the sense of intending not to sin in the future, (4) making due preparation and thanksgiving.

What will be the result if we follow the wise counsel of Holy Mother Church? The same decree puts it beautifully: “by the frequent or daily reception of the Holy Eucharist, union with Christ is strengthened, the spiritual life more abundantly sustained, the soul more richly endowed with virtues, and the pledge of everlasting happiness more securely bestowed.”

What a privilege—and what a challenge to us to order our lives so that we may grow in grace, purity, faith, and devotion!