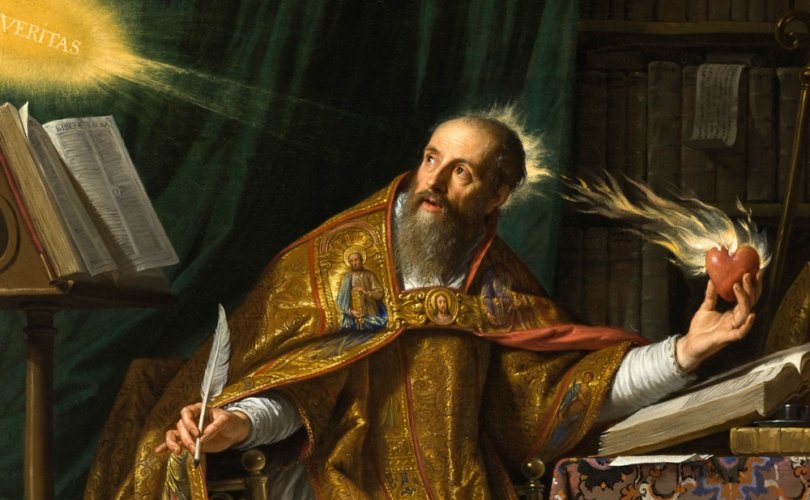 It is no surprise that a saint of his fame and influence should be the subject of countless exceptional works of art in the Western tradition. Here we see Augustine portrayed in 1650 by the highly respected French court painter Philippe de Champaigne (1602–1674). The artist would have felt a special reverence for and resonance with his subject, given the immense popularity of Augustine in 17th-century France.

Champaigne follows a number of standard iconographic conventions: the saint is shown seated, in the posture of a teacher, with a Bible elevated on a stand to his left, a book open at his desk to his right, and a quill in his hand, ready to write an epistle, a comment on Scripture, or a refutation of some burgeoning heresy. But the pen’s work would be vain babble in the absence of a heart burning with love of God. The depiction of the burning heart is a reference to the Confessions: “O Lord, Thou hast made us for Thyself, and our hearts are restless until they rest in Thee.” The painter subtly signifies this relationship of creature to Creator by showing the flames drawn off to the upper left, where a heavenly light marked Veritas, Truth, shines forth: “deep answers to deep,” God’s truth to the heart’s thirst. In this touch we are reminded that Augustine’s whole quest was for the Truth. It was indeed the Truth that set him free and sets all of us free—free to love chastely, free to be imperishably happy.

Augustine, however, is not merely an isolated Christian holed up in a cell, contemplating divine Truth. He is also a bishop, a pastor, as his episcopal vestments indicate. The magnificent cope is meant to remind us of a bishop “on the move,” since copes are traditionally worn for processions. The bishop is not a man for himself, for his own projects, interests, and schemes, but a man consecrated for others—to bring the Truth to them as well. Augustine’s continual stream of anti-heretical writings are fundamentally pastoral and charitable in nature: he wants to protect the sheep against the wolves and lead them to green pastures. Augustine exemplifies the advice of St Paul: “Preach the word: be urgent in season, out of season: reprove, entreat, rebuke in all patience and doctrine” (1 Tim 4:2). At the floor are strewn books by pagans and heretics whom Augustine has refuted. He crushes them beneath his foot, as Our Blessed Mother crushes the head of the serpent with her heel.

St Augustine fought principally against three heresies: Manichaeism, Donatism, and Pelagianism. Each of these systems of error has cropped up again and again in human history, and Augustine’s refutations have lost nothing of their power.

For the Manichees, reality was a battleground between a good God who presided over spirits and an evil god who fashioned matter and bodies. The resulting pessimism about the human body, sexuality, and procreation, the despising of the flesh of man, is obviously a problem we are dealing with today, not to mention the more general parallel between the Manichean worldview and Far Eastern religions as well as the New Age movement. Augustine showed that there can be only one supreme first principle; that all things, visible and invisible, material and spiritual, reflect His infinite perfection and are capable of giving glory to Him; and that “God so loved the world that he gave His only-begotten Son” in the flesh for our salvation in body and soul.

For the Donatists, the sacraments were valid if conferred by good and holy priests, but invalid if not. The Church was a Church “of the pure and for the pure.” Serious sinners were permanently cut off from the Body of Christ. How seductive is the Donatist perspective in any time of serious clerical corruption! Augustine argued that the human minister is an instrument in the hands of Christ the High Priest, who is the chief one acting in all the sacraments. Although he demands purity of His ministers and punishes those who are unfaithful, He is the one who ensures the validity and spiritual efficacy of the sacraments. Moreover, the path of repentance is never closed off to even the most serious sinner. One who repents of grave sin may again approach with joy the wedding feast of eternal life. The Church is for the pure, yes, but only in the sense that it exists to take sinners and make them pure by a life of ongoing conversion, sorrow for sins, and confession—not in the sense that one must already be perfect to be a Christian.

For the Pelagians, man could initiate his own salvation by the simple exercise of his free will, and obtain God’s grace merely by asking for it. In this view, man is the primary actor and God the one who reacts. Augustine, basing himself on Scripture, proved that God is always first and last: He creates us; He calls us to baptism; He bestows supernatural life on us; He gives us the very power and exercise of free will, yet in such a way that our freedom is never contradicted or canceled out, but empowered and elevated; He saves us from our sins and leads us to eternal life. There is no doubt that Pelagianism is alive and well today, especially in the form of the self-sufficient do-goodism and secular pastoral activism of the postconciliar period, which has abandoned contemplation and solemn liturgical prayer.