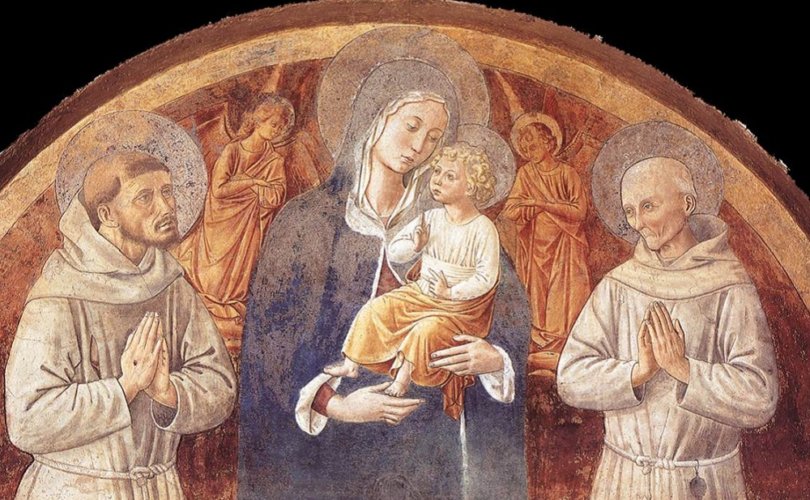 Benozzo Gozzoli (1420–1497), 'Madonna and Child between St Francis and St Bernardine of Siena.'

May 16, 2019 (LifeSiteNews) — Throughout the history of the Church, God raises up saints whose apostolic zeal and gift of preaching call to mind the Apostle to the Gentiles. Without a doubt, St. Bernardine (feast day: May 20) deserves to be numbered among the greatest of St. Paul’s imitators.

Born in Siena in 1380, Bernardine lost his parents as a boy and was brought up by his aunts. Although he was to be known throughout his life for his playfulness and buoyant spirit, he was an implacable foe of coarse jests and sordid occupations. As a child, he once struck a high-ranking official who had suggested dishonorable recreations and later returned with his friends to cast mud and stones at the man until he desisted from his wicked ways.

At twenty, he revealed to the world a hint of his fervor by taking charge of a hospital in Siena during a severe plague and organizing a band of friends who eased the victims’ suffering and prepared them for a holy death. Upon the death of his aunt, he sold his possessions and sought entry into the Franciscans of the Strict Observance, otherwise known as the Friars Minor or “little brothers.” At 24 he was ordained a priest. For the next twelve years, we know little about his life, save that he spent his time in prayer and meditation, as though in preparation for a great work.

Around the age of 36, a sign came to him that he should commence a labor of preaching throughout the feud-riven and vice-laden land of Italy. For the next 14 years, Bernardine traveled all over the country, preaching in every town and city — sometimes, on account of his growing fame, to open-air audiences as large as 30,000. Finding the people and their leaders steeped in avarice, luxury, vengeance, usury, and other excesses typical of the early Renaissance, Bernardine passionately exhorted his listeners to thrust aside their rivalries and worldly corruptions in order to obey the demands of the Gospel of Christ, the one true message of peace and the one unfailing guarantee of happiness.

So successful were his efforts at reconciling the rival factions of Guelphs and Ghibellines that families who had stolen one another’s property freely returned what had been taken, exiles were called back from their dwellings, and political shields and signs were replaced by monograms of the Holy Name of Jesus. Rather than tolerate their discordant factionalism as a lesser man would have done, Bernardine fearlessly rebuked statesmen and nobles, even as he weaned the common people of their addictions to gambling and carousing. By the force of his words and the grace of God, Bernardine turned the hearts of thousands to thoughts of peace and strengthened bonds of benevolence among families and neighbors.

During his travels on foot through the various provinces of Italy, his preaching coalesced more and more around the Name of Jesus, the power, beauty, and holiness of which he eloquently expounded before the crowds. At the end of his sermons he would hold aloft a wooden board inscribed with the letters “IHS” surrounded by rays of light and plead with the people to embrace as their way of life this heavenly name and all it signified.

The monogram “IHS,” which can still be seen in many Catholic churches and cathedrals, is an abbreviated form of the medieval spelling of the Name of Our Lord, “ihesus.” We find the monogram as early as the eighth century, written on a Roman gold coin: “dn ihs chs rex regnantium” (Lord Jesus Christ, King of Kings). Bernardine was also responsible for encouraging his listeners to add the Name of Jesus to the Hail Mary: “and blessed is the fruit of thy womb, Jesus.” From Italy, where it first took root, the custom quickly spread throughout the Universal Church.

Why did St. Bernardine invest such importance in the Savior’s Name? Frederick Holweck explains: “the Name of Jesus reminds us of all the blessings we receive through our Holy Redeemer.” Just as we honor Christ’s Passion when we revere the cross upon which the victim was offered, so too we give praise and worship to the Son of God when we invoke and show reverence to His Name. Holweck goes on to say (reference numbers omitted):

The Name of Jesus invoked with confidence brings help in bodily needs, according to the promise of Christ: “In my name…they shall take up serpents; and if they shall drink any deadly thing, it shall not hurt them: they shall lay their hands upon the sick, and they shall recover” (Mk. 16:17-18). In the Name of Jesus the Apostles gave strength to the lame (Acts 3:6; 9:34) and life to the dead (Acts 9:40). It gives consolation in spiritual trials. The Name of Jesus reminds the sinner of the prodigal son’s father and of the Good Samaritan; it recalls to the just the suffering and death of the innocent Lamb of God. It protects us against Satan and his wiles, for the Devil fears the Name of Jesus, who has conquered him on the Cross. In the name of Jesus we obtain every blessing and grace for time and eternity, for Christ has said: “If you ask the Father any thing in my name, he will give it you” (Jn. 16:23). Therefore the Church concludes all her prayers by the words: “Through Our Lord Jesus Christ,” etc. So the word of St. Paul is fulfilled: “That in the name of Jesus every knee should bow, of those that are in heaven, on earth, and under the earth” (Phil. 2:10).

St. Bernardine’s popularity attracted powerful friends — and no less powerful enemies. Accused of heresy and denounced before Pope Martin V, Bernardine was ultimately vindicated and his opponents put to shame. He turned down three offers of bishoprics from the same pope, “saying playfully that all Italy was already his diocese.”

When he turned fifty, Bernardine took up the office of vicar general of the Friars Minor. There is a fine lesson to be learned from the good results of his efforts: it is holiness and fervor that produce vocations, not lax rules and easier standards. Bernardine was on fire for the conversion of souls from the head to the heel of Italy; that is why his branch of the Franciscans grew from about 200 when he first entered religious life to over 4,000 by the time he died. As vicar general, he founded or reformed 300 convents, sent off missionaries to the Orient, and established contacts with the dissident Greek Christians, whose ambassadors he later addressed at the Council of Florence. Bernardine was a deeply learned man. His collected writings include formal Latin dissertations that elucidate his teaching, essays on ascetical and mystical theology, books on practical discipline, treatises on the Virgin Mary, and a commentary on the Apocalypse of St. John.

After 12 years as vicar general, Bernardine, now 62, resigned his office in order to return to preaching, as was his heart’s longing. Despite ill health, two years later, during the Lent of 1444, he preached in the town of Massa Marittima on 50 consecutive days, for three to four hours each day. Although by the end of this Lent his health was already weak, he set out for Naples, the only place he had not yet preached in the course of his life. As he made his way thither, he came down with a fever and died at Aquila on the eve of the Ascension, May 20, in the company of friars.

Universally revered for his holiness, gentleness, courage, and ardor, Bernardine was canonized within six years of his death by the Holy Church on whose behalf he humbly and faithfully toiled for more than 40 years. This great Franciscan saint shows us the kind of priest, preacher, and administrator the Church on Earth needs today.