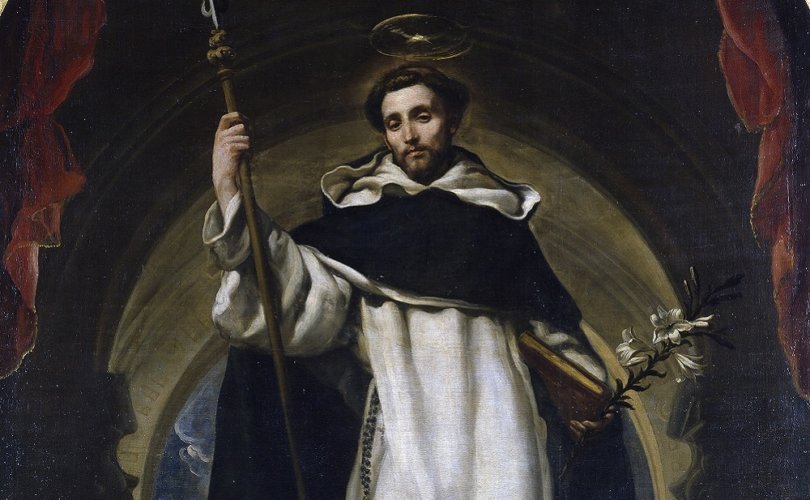 August 7, 2019 (LifeSiteNews) — On August 4 in the old Roman calendar, August 8 in the new calendar (see here for an explanation of the discrepancy), the Catholic Church celebrates the memory of St. Dominic, invokes his intercession, and puts forth his example. As the Benedictines, Franciscans, and Jesuits at their best embody the personality and spirituality of Saint Benedict, Saint Francis, and Saint Ignatius, so, too, the Order of Preachers bears deep within it the character and charism of their founder, Dominic de Guzmán.

Saint Dominic himself is, in many ways, inimitable. His virtues and gifts are so rich that he can be partially imitated by countless men and women, while remaining beyond them as a beacon to look to, a model to strive toward. His own contemporaries recognized this. The canonization records are full of testimonies like this: “The witness had never known anyone like the man of God for continual prayer and for devotion to preaching.”

This seems to be true of all the great founders of religious orders: they might be said to precontain in themselves the spirit and purpose of their orders, and so they remain as first principles, like the sun in regard to life on Earth. We read that Saint Dominic was tireless in apostolic labors, walking thousands of miles and preaching the good news, as the brethren are supposed to do. But we also read that he spent hours of the day and night in contemplative prayer — an ideal toward which the contemplative sisters particularly strive, and for which the life of the brethren is not as perfectly suited. Dominic could combine both to perfection; most of his followers are rather more limited!

Saint Dominic’s great love was Truth — the Word of God, Jesus Christ, who nourishes us with the divine food of the Eucharist and teaches us in the human language of Sacred Scripture. The expression of his great love was the constant preaching of this Word in his words and in his actions. The goal of his preaching was never anything less than conversion: conversion of pagans into Christians, lukewarm Christians into serious ones, serious ones into saints.

The means he employed are as simple as can be: study, in order to increase the knowledge of the truth; poverty, in order to be convincing witnesses of the priority of spiritual goods over worldly ones; itinerancy, leaving one free to go wherever need demands; and, most importantly, prayer, so as to be transformed into the Love one preaches.

Such a goal and such means obviously presuppose fidelity to the Church and to her teaching, without which the herald becomes a heretic, the mendicant a miscreant, the apostle an apostate. Most importantly, the entire way of life has to be “rooted and grounded in charity” (Eph. 3:17): in the love of God for His own sake and in love of one’s neighbor as God’s image, redeemed by the Blood of Christ.

Everything we know about Saint Dominic shows us that he was consumed by love of God and love of neighbor. That love is what gave him the daring to adapt religious life in a new way to the new circumstances of his age, the insight to see how it might be done, the zeal to persevere in spite of obstacles. Wherever and whenever the Dominicans have flourished, these have been their secrets, these their means, this their goal, and God has blessed them.

What were the radical things Dominic did? Mendicant poverty — which means, to be blunt, begging for your supper. Itinerant preaching, which shook up the connection between religious and a fixed location, between priests and a fixed parish or diocese. Staying up all night to pray, and trusting in God in every circumstance, are, truth be told, no less radical, since they stem from heroic faith.

In spite of its routine humanitarian protestations to the contrary, the modern world is not really interested in the plight of the poor or the problem of poverty, and, sadly, the modern Church often seems no more interested in the full Gospel of Christ or in serious and disciplined prayer. However, there will always be people, especially among the young, who are looking for the meaning of life, for the love that makes life worth living, for the source of all reality, for the truth that soars above the incessant din of opinion. If the Dominicans today can offer what Dominic offered to the men of his age, the order will flourish now as it did at the beginning and at every peak period of its history. In this way, fidelity becomes a promise of growth and missionary efficacy, while laxity, dissent, and eclecticism are harbingers of irrelevance, indifference, and decay.

However different our world may be, it is still thirsting for the Good News; it is still making the same old mistakes that the children of Adam have always made; and it still needs the same effective remedies, which have never essentially changed.