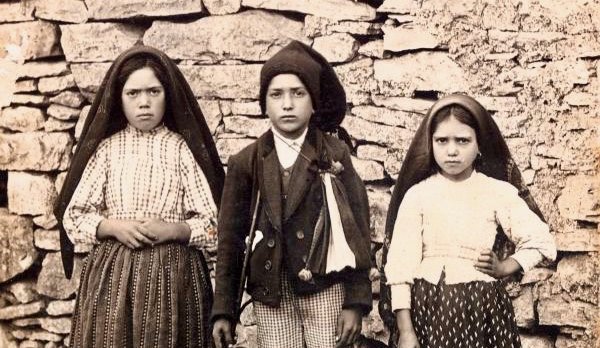 October 5, 2017, (Voice Of The Family) – 13 October 2017 will be the centenary of the Miracle of Sun and the final apparition of Our Lady of Fatima. Despite being essential for understanding the period of history that we are now living through, the details of these remarkable events are far too little known, including amongst Catholics. In this article, we wish to draw attention to the much-neglected role of St Joseph during that momentous event.

Following the Miracle of Sun, and at the culmination of Our Lady’s final apparition, St Joseph also appeared to the three young seers. Father John de Marchi, in his book The True Story of Fatima, describes it as follows:

To the left of the sun, Saint Joseph appeared holding in his left arm the Child Jesus. Saint Joseph emerged from the bright clouds only to his chest, sufficient to allow him to raise his right hand and make, together with the Child Jesus, the Sign of the Cross three times over the world. As Saint Joseph did this, Our Lady stood in all Her brilliancy to the right of the sun, dressed in the blue and white robes of Our Lady of the Rosary. Meanwhile, Francisco and Jacinta were bathed in the marvelous colors and signs of the sun, and Lucia was privileged to gaze upon Our Lord dressed in red as the Divine Redeemer, blessing the world, as Our Lady had foretold. Like Saint Joseph, He was seen only from His chest up. Beside Him stood Our Lady, dressed now in the purple robes of Our Lady of Sorrows, but without the sword. Finally, the Blessed Virgin appeared again to Lucia in all Her ethereal brightness, clothed in the simple brown robes of Mount Carmel.

This final apparition at Fatima points us towards three particular forms of devotion towards Our Lady that we are called to practice during this “final battle” against Satan. These are devotion to:

However, it is of the greatest importance to note that the final apparition of Fatima also directs us towards the intercession of St Joseph, whom Our Lord intimately associated with Himself in his blessing of the world.

Our Lord, already so much offended by the sins of mankind and particularly by the mistreatment of the children by the officials of the county, could easily have destroyed the world on that eventful day. However, Our Lord did not come to destroy, but to save. He saved the world that day through the blessing of good Saint Joseph and the love of the Immaculate Heart of Mary for Her children on earth. Our Lord would have stopped the great World War then raging and given peace to the world through Saint Joseph, Jacinta later declared, if the children had not been arrested and taken to Ourém.

On the Feast of the Immaculate Conception, 8 December 1870, Blessed Pope Pius IX, following appeals received from bishops worldwide, had declared St Joseph to be Patron of the Universal Church, “in this most sorrowful time” when “the Church herself is beset by enemies on every side and oppressed by heavy calamities, so that impious men imagine that the gates of Hell are at length prevailing against her.”

Pope Leo XIII, to whom it was revealed in 1884 that Satan would be given, for a time, increased power to work for the destruction the Church, instituted a new devotion to St Joseph in his encyclical letter Quamquam pluries, promulgated on the Feast of the Assumption, 15 August 1889. The Supreme Pontiff wrote:

During periods of stress and trial – chiefly when every lawlessness of act seems permitted to the powers of darkness – it has been the custom in the Church to plead with special fervour and perseverance to God, her author and protector, by recourse to the intercession of the saints – and chiefly of the Blessed Virgin, Mother of God – whose patronage has ever been the most efficacious.

We see faith, the root of all the Christian virtues, lessening in many souls; we see charity growing cold; the young generation daily growing in depravity of morals and views; the Church of Jesus Christ attacked on every side by open force or by craft; a relentless war waged against the Sovereign Pontiff; and the very foundations of religion undermined with a boldness which waxes daily in intensity. These things are, indeed, so much a matter of notoriety that it is needless for Us to expatiate on the depths to which society has sunk in these days, or on the designs which now agitate the minds of men. In circumstances so unhappy and troublous, human remedies are insufficient, and it becomes necessary, as a sole resource, to beg for assistance from the Divine power.

More than a century after the promulgation of this encyclical the evils identified by Pope Leo XIII have intensified to a degree that would have been inconceivable to most people in 1889. Thousands of innocent children are slaughtered every day with the approval of the governments that ought to be defending them, the sanctity of marriage is defiled by divorce, adultery and contraception, and the bonds between parents and their children are being deliberately targeted for destruction by the most powerful states and institutions in the world. Worst of all, the Pope himself is responsible for the spread of heresies which are leading the flock away from Christ and towards eternal damnation.

Pope Leo XIII urged the faithful, just as Our Lady would do twenty-eight years later at Fatima, to combat these evils through the prayer of the Holy Rosary:

At this proximity of the month of October, which We have already consecrated to the Virgin Mary, under the title of Our Lady of the Rosary, We earnestly exhort the faithful to perform the exercises of this month with, if possible, even more piety and constancy than heretofore. We know that there is sure help in the maternal goodness of the Virgin, and We are very certain that We shall never vainly place Our trust in her. If, on innumerable occasions, she has displayed her power in aid of the Christian world, why should We doubt that she will now renew the assistance of her power and favour, if humble and constant prayers are offered up on all sides to her? Nay, We rather believe that her intervention will be the more marvellous as she has permitted Us to pray to her, for so long a time, with special appeals.

But then, once more anticipating Fatima, he directed the faithful also towards St Joseph:

But We entertain another object, which, according to your wont, Venerable Brethren, you will advance with fervour. That God may be more favourable to Our prayers, and that He may come with bounty and promptitude to the aid of His Church, We judge it of deep utility for the Christian people, continually to invoke with great piety and trust, together with the Virgin-Mother of God, her chaste Spouse, the Blessed Joseph; and We regard it as most certain that this will be most pleasing to the Virgin herself.

the divine house which Joseph ruled with the authority of a father, contained within its limits the scarce-born Church. From the same fact that the most holy Virgin is the mother of Jesus Christ is she the mother of all Christians whom she bore on Mount Calvary amid the supreme throes of the Redemption; Jesus Christ is, in a manner, the first-born of Christians, who by the adoption and Redemption are his brothers. And for such reasons the Blessed Patriarch looks upon the multitude of Christians who make up the Church as confided specially to his trust – this limitless family spread over the earth, over which, because he is the spouse of Mary and the Father of Jesus Christ he holds, as it were, a paternal authority. It is, then, natural and worthy that as the Blessed Joseph ministered to all the needs of the family at Nazareth and girt it about with his protection, he should now cover with the cloak of his heavenly patronage and defend the Church of Jesus Christ.

Therefore the Holy Father instituted a new prayer to said after the Holy Rosary throughout the month of October. He intended this prayer to be said, not just in October 1889, but in October every year. As we prepare for the centenary of the Miracle of Sun, let us learn the lesson of St Joseph’s apparition at Fatima, and turn to him for help and protection.

St Joseph, terror of demons, pray for us!

Reminder: This coming Friday and Saturday are the First Friday and First Saturday of October.

To thee, O blessed Joseph, do we have recourse in our tribulation, and having implored the help of thy thrice holy Spouse, we confidently invoke thy patronage also. By that charity wherewith thou wast united to the Immaculate Virgin Mother of God, and by that fatherly affection with which thou didst embrace the Child Jesus, we beseech thee and we humbly pray, that thou wouldst look graciously upon the inheritance which Jesus Christ hath purchased by His Blood, and assist us in our needs by thy power and strength.

Most watchful Guardian of the Holy Family, protect the chosen people of Jesus Christ; keep far from us, most loving father, all blight of error and corruption: mercifully assist us from heaven, most mighty defender, in this our conflict with the powers of darkness; and, even as of old thou didst rescue the Child Jesus from the supreme peril of his life, so now defend God’s Holy Church from the snares of the enemy and from all adversity; keep us one and all under thy continual protection, that we may be supported by thine example and thine assistance, may be enabled to lead a holy life, die a happy death and come at last to the possession of everlasting blessedness in heaven. Amen.

God the Son, Redeemer of the world

Spouse of the Mother of God

Chaste guardian of the Virgin

Foster-father of the Son of God

Head of the holy family

Solace of the wretched

Hope of the sick

Patron of the dying

Protector of the holy Church

Lamb of God, who takes away the sins of the world, spare us, O Lord

Lamb of God, who takes away the sins of the world, graciously hear us, O Lord

Lamb of God, who takes away the sins of the world, have mercy on us

V. He made him lord of His House

R. And ruler of all His possessions

O God, Who, in Thine ineffable Providence didst vouchsafe to choose blessed Joseph to be the Spouse of Thy most holy Mother; grant, we beseech Thee, that we may be worthy to have him for our intercessor in Heaven whom, on earth, we venerate as our protector. Who livest and reignest world without end. Amen.

Editor's note: Reprinted by permission from Voice of the Family.