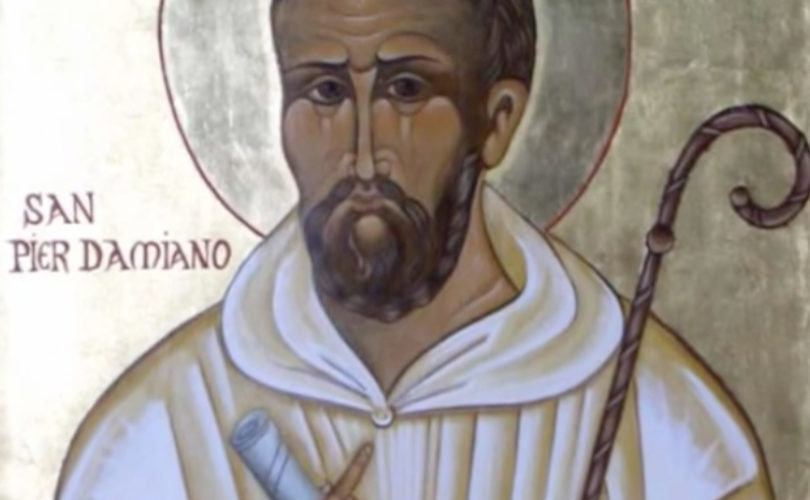 June 29, 2015 (LifeSiteNews) – The rise of the power and influence of homosexual priests, bishops and cardinals, as well as influential laity, has been a major factor in the growing chaos within Catholicism over the past 60 years. This disorder within the Catholic Church has had a negative impact on the entire world because of the resulting decline in the positive influences that Catholicism has had on civilization for many centuries.

To think that what is happening now is new, however, betrays an ignorance of history. In 1049, when St. Peter Damian wrote his treatise, Book of Gomorrah (Liber Gomorrhianus), to Pope Leo IX, homosexuality and sexual perversion in general were far more openly rampant within the clergy than today.  This horrendous state of affairs is what the Saint addressed in his appeal to the Pope for urgently needed reforms.

We often hear from sleepy, comfortable, cowardly, timid or cultural Catholics, and especially from clergy who are directly implicated in homosexuality, that we should never criticize priests, bishops and especially the Pope. Supposedly, that is a greater sin than that of the heretics and sexual perverts facilitating great personal suffering and sending souls to Hell without anyone doing what is necessary to either convert or stop them.

St. Peter Damian was not so foolish as to listen to such nonsense denying God His justice at a time when the Church appeared to be in its death throes. He understood the grave duty to be blunt about the dangers and sinfulness, to not minimize the catastrophe that would come if strong actions were not quickly taken and to demand corrective actions. And yet, he also emphasized that all of this must be done with charity and Christian hope for the persons involved in the moral corruption. Their conversion was above all hoped and prayed for, rather than their condemnation for eternity.

An Italian translated version of the Book of Gomorrah has recently been published. An English version carefully translated by one of our LifeSite journalists will also soon become available.

On Feb. 11 of this year the Rorate Caeli website published excerpts from the introduction by Professor Roberto de Mattei to the Italian version.

Following are some paragraphs from that introduction that I hope will jar awake some of the faithful, especially considering what is going on now in the United States as a result of the mad Supreme Court decision and the moral chaos around the Synod on the Family regarding Church sexual teachings.

Excerpts from the Introduction:

St. Peter Damien (1007-1072) Abbot of the Fonte Avellana Monastery and subsequently Cardinal/Bishop of Ostia, was one of the most outstanding figures of Catholic reform in the XI century. His Liber Gomorrhianus, appeared around 1049, in an age when corruption was widely spread, even in the highest ranks of the ecclesiastical world.

In this writing, addressed to Pope Leo IX, Peter Damien condemns the perverted habits of his time in a language that knows no false mercy or compromises. He is convinced that of all the sins, the gravest is sodomy, a term which includes all the acts against nature and which want to satisfy sexual pleasure by separating it from procreation. “If this absolutely ignominious and abominable vice is not immediately stopped with an iron fist – he writes – the sword of Divine wrath will fall upon us, bringing ruin to many.”

There have been times in (the Church’s) history when sanctity pervades Her and others when the defection of Her members cause Her to collapse into darkness, appearing almost as if the Divinity has abandoned Her.

Peter Damien’s voice resounds today, as it did yesterday, with encouragement and comfort for those, like him, who have fought, suffered, cried and hoped, throughout the course of history.

He did not moderate his language, but kept it fiery to show his indignation. He was fearless in voicing an uncompromising hatred for sin and it was precisely this hatred that rendered his love burning for the Truth and the Good.

Today, at the beginning of the third millennium of Christ’s birth, priests, bishops and Episcopal conferences are arguing for married priests; they are placing in doubt the indissolubility of the marriage bond between man and woman and at the same time, accepting the introduction of laws for homosexual pseudo-marriage. Sodomy is not being thought of as a sin that cries to God for vengeance but is diffused in seminaries, colleges, ecclesiastical universities and even inside the Sacred Walls of the Vatican itself.

Liber Gomorrhianus reminds us that there is something worse than moral vice practiced and theorized. It is the silence that should speak, the abstention that should intervene, the bond of complicity that is established among the wicked and of those, who with the pretext of avoiding scandal are silent, and, by being silent, consent.

Graver still, is the acceptance of homosexuality by churchmen, thought of as a “positive” tension towards the good, worthy of pastoral care and juridical protection and not as an abominable sin. In the summary Relatio post disceptationem of the first week’s work in the Synod of Bishops in October 2014, a paragraph affirmed that: “homosexual persons have gifts and qualities to offer the Christian community”, with an invitation to the Bishops “…are we capable of welcoming these people, guaranteeing them a fraternal space in our communities?”

This scandalous statement was removed from the final report, but some bishops and cardinals, inside and outside the Synod Hall, insisted on the appeal to look for the positive aspects of a union against nature, going as far as hoping for “a way to describe the rights of people living in same-sex unions.”

St. Peter Damian as a simple monk, and with greater reason as a cardinal, did not hesitate in accusing even the Popes of that time for their scandalous omissions. Will the reading of the book Liber Gomorrhianus instill the spirit of St. Peter Damien in the hearts of some prelates or laypeople, by shaking them out of their torpor and force them to speak and act?

Even if abysmally far from the holiness and prophetic spirit of St. Peter Damien, let us make his indignation against evil, ours, and with the words that conclude his treatise we turn to the Vicar of Christ, His Holiness, Pope Francis, presently reigning, so that he may intervene and bring an end to these doctrinal and moral scandals: “May the Almighty Lord assist us, Most Reverend Father, so that during the time of Your Apostolate, all of the monstrosity of this vice be destroyed and the state of the Church, presently supine, may wholly rise up again in all its vigour.”

The book can be found in Italian here.

(Note: the name of the saint is spelled Damian in English and Damien in Italian and French. In Fr. Mattei's quotes is it spelled Damien)

Why all Catholics need to care about homosexuality