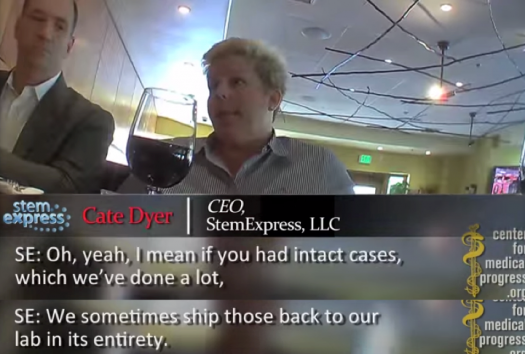 Aug. 26, 2015 (JillStanek) – Normally we would be asking, in the words of Hillary Clinton, “what difference does it make” whether StemExpress gets its severed baby heads from intact or disassembled bodies.

But it matters to StemExpress CEO Cate Dyer for some reason.

Yesterday, Dyer denied she meant “intact fetus” when using the term “intact case” after being caught on video in a restaurant meeting with undercover investigators posing as fetal tissue buyers:

Dyer: Realistically, if we were to do an agreement with you, what do we think you could get?

Dyer: On specifically liver tissue, because that’s such an area of demand for us.

Buyer: So liver, and what about intact specimens, just—?

Dyer: Oh, yeah, I mean if you had intact cases, which we’ve done a lot, we sometimes ship those back to our lab in its entirety.

Dyer: So that would also be great if you guys have those.

Dyer: Yeah, yeah. Because it’s just, and the procurement for us, I mean it can go really sideways, depending on the facility, and then our samples are destroyed, and we’re like, “Really?” This was all so much work, and then just to have them be destroyed is awful. I mean we have researchers wait forever, and they want certain things, you know, perfectly done, so we started bringing them back even to manage it from a procurement expert standpoint.

Dyer said yesterday she clearly meant “intact livers,” as if it would be unusual to find a tiny whole fetal liver but more typical to find tiny liver parts in a petri dish, and know they were tiny liver parts, and put all the tiny pieces in a ziplock and ship them.

The conversation would make much more sense were Dyer to have meant “intact fetus,” as in organs and tissue are easily destroyed, but if the entire fetal cadaver is shipped to StemExpress, their “expert” can dissect what is needed so the procurement doesn’t “go really sideways.”

Nevertheless, Dyer insisted yesterday, “My use of the term ‘intact cases’ is a medical term of art that refers solely to ‘intact livers’…”

Still, Dyer insists “StemExpress has never requested, received or provided to a researcher an ‘intact fetus.'”

Dyer’s contorted denial holds even less merit when considering StemExpress has indeed been on the hunt for intact embryos, as this StemExpress procurement email, which CMP also has posted on its website, indicates:

“RPMI” refers to the medium in which to place the “7wks/Whole Embryo” for shipment.

In scientific terminology, an “embryo” becomes a “fetus” at eight weeks. So this aborted baby was one week shy of being considered a fetus.

Perhaps it’s true that StemExpress draws the line at eight weeks. No whole babies after eight weeks, only pieces. Only organs.

But given StemExpress’s own documentation, this sounds implausible.

Why even care? Why even go into over-denial drive?

If Dyer were concerned about optics, I don’t think the optics could get much worse than when she joked about shipping severed fetal heads, as she did in another part of the conversation:

Dyer: As you probably know, one of the issues with neural tissue, it’s so fragile. It’s insanely fragile. And I don’t even know—I was gonna say, I know we get requests for neural, it’s the hardest thing in the world to ship.

Buyer: You do it as the whole calvarium [head].

Dyer: Yeah, that’s the easiest way. And we’ve actually had good success with that.

Buyer: Make sure the eyes are closed!

Optics can’t get much worse than that.

What is more likely is Dyer knows congressional investigations are going to, in part, center on whether Planned Parenthood and other abortion clinics aborted babies alive to get StemExpress the “cases” it wanted.

And it would have been per StemExpress’s own instructions. From the same procurement email as above:

“[W]ithout digoxin applied” means this 18-20-week-old baby wasn’t to be killed before s/he was aborted. “Same Day… Personal pick-up on site near clinic” means they obviously wanted to get this baby’s organs to the researcher quickly, “to reduce ishemia time,” meaning before the blood supply left the organs (“ishemia” being a misspelling of the word “ischemia“).

In other words, StemExpress needed a organs from a very freshly killed baby.

Or perhaps not yet killed when the organs were harvested?

And that’s what Cate Dyer is worried someone will want to talk about.

Reprinted with permission from JillStanek.com