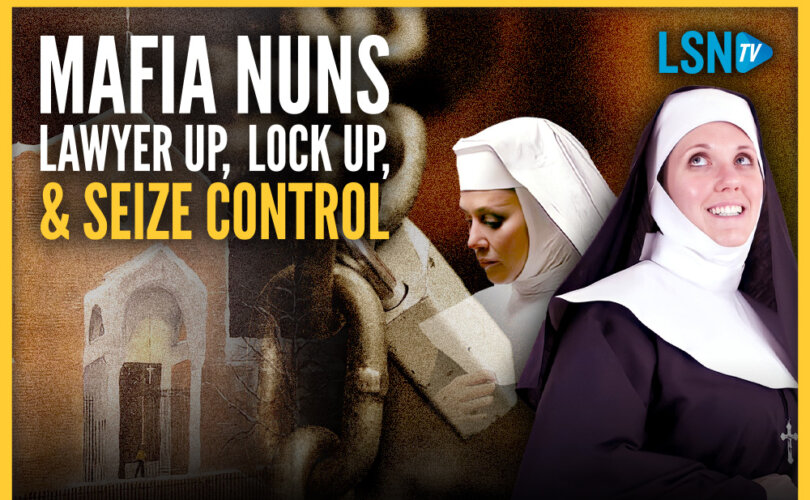 (LifeSiteNews) — Events surrounding the historic and nationally important Carmelite monastery in Philadelphia, which Rome seems to have purposefully suppressed instead of reviving, continue to shock observers.

LifeSiteNews’ Jim Hale interviewed Robert Pagnotta, the caretaker of the Carmel in Philadelphia, who described the shocking behavior of those Carmelite nuns who are in agreement and in collaboration with Rome and who, as it seems, have now received from Rome the mission to dissolve the Carmel.

As Robert Pegnotta told Hale, the leading nuns of the St. Joseph Association of Discalced Carmelite Nuns in the U.S., Sister Mary Elizabeth and Sister Gabriela (Hicks) of the Incarnation, the day before Thanksgiving, showed up at the monastery and had the locks changed so that he could not enter the chapel and the remaining monastery anymore.

READ: ‘They are profiting from the closure of the monastery’: Rome suppresses Carmel in Philadelphia

Pagnotta, on that day, suddenly heard noises in the chapel, where nobody else has access to, and he was afraid who it could be. A man told him that he was there “with the sisters.” Commented Pagnotta: “I said, ‘What sisters? … There are no sisters here.’ I am on high alert.” The lawyer was not telling him why they were there, but “strangely, he knew who I was.”

“I am still shaken over it,” he told Hale, since he was not informed that the nuns, together with a lawyer and a locksmith, would come.

The Sisters of the St. Joseph Association, as Hale explained, “claim ownership of the Carmel,” after Rome had suppressed it in February of this year.

The St. Joseph Association also was involved in the Apostolic Visitation of the Carmel in Philadelphia last year. Sister Gabriela Hicks is a leading Carmelite nun aligned with the reform plans of the Vatican, specifically the Vatican instruction Cor Orans which forces the independent Carmelite monasteries in the world to join associations and to attend collective gatherings. Part of the Cor Orans reform plan is to open these monasteries up more and thereby undermine the traditional charism of these monasteries.

As LifeSite reported last year, some traditional nuns from the Carmelite monastery in Valparaiso, Nebraska, and Elysburg (now Fairfield), Pennsylvania, had moved in 2017 into the Carmel of Philadelphia, upon the request of one of the last remaining nuns there, Mother Pia. They stayed there for a few years and started having vocations.

But then it became clearer that the new Archbishop of Philadelphia, Nelson J. Perez, did not support these nuns who adhere to the Traditional Latin Mass and lived the traditional and stricter Carmelite charism. As one source told LifeSite, Perez has been telling other bishops at the U.S. Conference of Catholic Bishops that “the nuns in Valparaiso and Fairfield are a cult.”

READ: Priest: Attacks against Carmelites of Philadelphia are ‘part of greater war against contemplative religious’

Rome also did not permit these nuns to leave the St. Joseph Association. During their Apostolic Visitation last year of the nuns in Fairfield, the visitators were also overheard saying that these nuns will have to return to the Novus Ordo Mass. Sister Gabriela Hicks, one of the Visitators in Philadelphia and Fairfield, even stated in public, when speaking about these two traditional communities: “Spiritual abuse is especially rampant in communities with sectarian aberrations,” implying that they are a sect. (Find more here on how Sister Gabriela Hicks presented the story. As LifeSiteNews learned, she has been charged with rewriting the traditional 1990 Discalced Carmelite Constitutions to conform with Cor Orans.)

Catherine Bauer, the lay speaker for the Fairfield nuns, explained the situation in November of last year as follows:

The Valparaiso Carmelites had been asked to re-found a Carmelite community in Philadelphia. There were three elderly nuns there, one of whom has since died and a second has entered a nursing home. Valparaiso agreed, and sent six nuns, with another three coming from Elysburg (now part of Fairfield) [the Elysburg nuns joined Fairfield]. In 2021, the nuns wanted to return to Valparaiso, as they believed the implementation of Cor Orans was interfering with their way of life. The nine nuns did return to Valparaiso, along with two aspirants who had joined the community.

That is to say, Rome and the Archdiocese of Philadelphia discouraged nine young Carmelite nuns from staying in the historic Carmel in Philadelphia, so that they had to leave in April of 2021.

As sources told LifeSite, even after the traditional nuns had left, the remaining nun, Mother Pia, still was working on getting new nuns from other monasteries to Philadelphia, but the archdiocese was against it.

The result is the suppression of the monastery, after Mother Pia left the Carmel in February of this year.

The shocking recent conduct of Sister Mary Elizabeth – the president of the St. Joseph Association – and Sister Gabriela (Hicks) of the Incarnation, who is a councilor of that association, once more indicates the lack of charity of those aligned with Rome under Pope Francis. They acted, just a day before Thanksgiving, like “mafia gangsters,” as one observer put it.

The faithful in Philadelphia are outraged. Brian Middleton, a prominent lay Catholic in the area, told LifeSite’s Jim Hale that the decomposition of the Church today “is not completely beyond the control of the people in charge.”

Just as with the unneeded closing of Catholic schools in the Archdiocese of Philadelphia, Middleton sees that this is “part of a larger plan.” In the current battle in the Church, he added, there are clearly “two opposing sides,” with one trying to defend the Tradition, and with another side where the “Magisterium is looking to destroy Sacred Tradition.”

For Catholic layman Tom Gilmartin, the Vatican instruction Cor Orans is “not designed to reinvigorate monasteries,” but to “destroy” them. “Why do you want to obey that document?” he asked while adding that “this blind obedience that’s going on is, I find no other word, evil, that has people misled.”

Another Philadelphia Catholic, Leo Fitzsimmons, sees that this sort of “destruction” is “going on for years.” He told Hale that there is documentation that, “from the See of Rome, properties were totally illegally confiscated and good religious were kicked out of property. The property was looted, the funds were taken. And nothing was done about it.” Fitzsimmons called upon the laity to get more engaged in these matters and to “protect Holy Mother Church.”

“If we do not stand up for this and fight,” stated another Philadelphia layman, Andrew Dunn, “then we wind up in a situation where we have no Catholic presence, or even faith, in the United States, and I cannot myself let that happen.”

Yet another layman, Peter Korman, cannot even imagine what “would happen to this neighborhood” in Philadelphia, should the Carmel disappear altogether, since “there is a grace of having this presence of this Sacrament in this location.”

Thus, this story of the Carmel in Philadelphia is not only a story about just one Carmel, it is the story about many other Carmels and monasteries which are undergoing similar challenges – and Apostolic Visitations – right now.

But it is also about the one specific Carmel that was the birthplace of devotion to St. Therese of Lisieux in the United States and thus deserves to be defended and preserved.

Let us all work and fight for the defense of this Carmel.

St. Therese of Lisieux, help us.