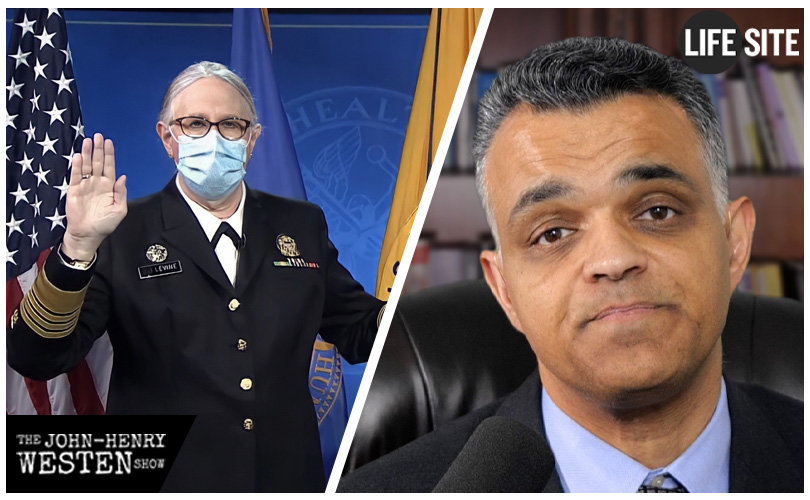 (LifeSiteNews) – In a world where feelings matter more than facts and those proclaiming the truth are labeled as conspiracy theorists, nothing surprises us or jars us anymore.

We’re constantly bombarded by so much news with each event crazier by the day leaving us numb and indifferent. And yet we must sit up and take notice because when we speak up, when we act, when we band together, the Orwellian forces that believe they can get away with anything and everything will realize that they can’t.

The abortion-pushing Biden administration has announced another promotion for “transgender” Assistant Health & Human Services (HHS) Secretary Richard “Rachel” Levine, who was sworn in Tuesday as a four-star admiral of the U.S. Public Health Service Commissioned Corps (PHSCC), for which some in the press are describing him as the “first female” to reach such a high-ranking position, ignoring the fact that he is a biological male.

So let’s get this straight. Under the regime of woke politics men can’t speak about abortion because they’re not women and they have no uteruses, but at the same time men can become women just like that and also steal women’s awards in sports and break the glass ceiling for women by claiming to be women.

Oh and by the way, not only is Levine not the “first female” to reach this position, his official government biography lists no prior military service.

This ridiculous glorification of gender dysphoric men has grave consequences.

A pro-LGBTQ school board member of the Loudoun County Public School in Virginia has resigned from her position over controversy about the cover-up of an alleged rape by a skirt-wearing male student in a female washroom. The parent of the girl who had been a victim of the bathroom rape attempted to alert attendees to the board meeting and was arrested and cited as an example of a ‘domestic terrorist’ by National School Board Association.

According to court documents, the 15-year-old trans-identifying make has entered the girls’ bathroom wearing a skirt. He has been accused of sexual assault in two different schools and between these two attacks, the Loudoun County School Board enacted a policy allowing students to access sex-specific private spaces, including bathrooms, and to play on sports teams based on their “gender identity.”

Chief Judge Pamela Brooks of the Virginia Juvenile and Domestic Relations District Court ruled that there was sufficient evidence to find the “gender-fluid” student guilty of two counts of “forcible sodomy” in the Stone Bridge High School case. And since the adults are much to woke to do much about this, and want to bend their minds to the trans dogma so much, students themselves took to protesting the insanity.

Hundreds of high school students across Loudoun County, Virginia, walked out of class in protest and slammed school officials for mishandling this assault case.

It is never about compassion and tolerance and acceptance and women’s rights. It never was and never will be.

This horrifying story is proof of the fact that the woke LGBTQ movement bent on erasing gender and sexuality are against women and have no qualms with letting women and children suffer sexual assault as long as their agenda is established.

They are ready to go to any lengths to protect their woke religion even if it means sacrificing women and children. And this shouldn’t surprise us.

The ancient pagans sacrificed their children to Baal and Moloch and in today’s world we sacrifice babies in the wombs of their mothers to the gods of money and convenience through Planned Parenthood and this very same lobby that turns a blind eye to this war on women and children.

This religion of the woke, abortion-loving LGBTQ lobby is eerily similar to that of the Satanic temple that lists abortion as their sacred ritual and vows to fight to the death for LGBTQ rights.

C.S. Lewis says, “All sin, whatever else it is, is sacrilege.” We read in the Scripture, “In the day that God created man, he made him to the likeness of God. He created them male and female; and blessed them.”

The war against male and female just like the war against the babies in the womb is diabolic and it makes perfect sense for the occult to be part of this agenda.

And they want to spread this false religion also to children. A recent Twix candy commercial promotes transgenderism to children complete with the message that children who think that a boy dressed like a girl is “weird” will be subject to banishment, silencing, and possibly death. Watch my video above to catch this clip.

Walt Heyer, a man who underwent surgery to make himself appear like a woman and lived for eight years as “Laura” only to later experience regret and detransition, says, “The message delivered by the Twix commercial is psychologically and emotionally destructive.”

But in addition, Heyer sees another agenda at play giving witchcraft a positive spin with an anti-God message. “What Twix and the creative team behind the ad are revealing is, if you read between the lines, that transgenderism is witchcraft. This is indoctrination [aimed at] separating children from God.  This is how you divide children from God and bring them into the LGBT world, which is a form of witchcraft ideology. The nanny-witch in the commercial is saying, ‘Come with me, you don’t need God.’”

One section of the bill declares “gender identity” and “sexual orientation” federally-protected classes, like race or disability.

The Religious Freedom Institute points out the danger of the provision noting it “would severely undermine religious freedom in America, and tacitly affirm the pernicious, false message that the sexual morality historically taught by Judaism, Christianity, and Islam is bigoted and akin to racism.”

“Rural faith-based colleges and universities, small faith-based businesses, and religious hospitals and medical clinics, sometimes providing the only healthcare services for miles, could be forced to violate their religious conscience or be denied participation in the program,” the organization added.

Governments forcing people to dance to their tune is not exclusive to America.

Though America is still subtle about their oppressive and Communist tactics, New Zealand Prime Minister Jacinda Ardern was very upfront in admitting that her new COVID restrictions plan will lead to unvaccinated people becoming second-class citizens with fewer freedoms that vaccinated people.

But saddest of all, it is not just tyrannical government leaders like Jacinda Ardern turning all who refuse the abortion-tainted so-called vaccines into second-class citizens, it is some religious leaders as well.

In Canada, Bishop R. Anthony Daniels of the Diocese of Grand Falls-Windsor has decreed that anyone aged 12 or older who wants to go to Mass must have proof of COVID inoculation. In his letter, the bishop gave detailed instructions for downloading an app that facilitates vaccine-segregation in the province and stressed the importance of “compliance with the Mandate.”

The mandate is of the bishop’s own making since the province does not require vaccination for attendance at religious services. But Bishop Daniels is telling young teens to get the jab or be deprived of the Holy Sacrifice of the Mass. That is sick and disgusting, and will cry to heaven for vengeance.

And Bishop Daniels is not the only Catholic leader swept up in the vogue new sacrament of vaccination. Believe it or not, Dr. Anthony Fauci has been awarded the Saint Katherine Drexel Award from an organization of retired Catholic monks and nuns.

The Support Our Aging Religious organization gave Fauci the award for his “significant contributions to the Catholic Church and particularly to America’s men and women religious.”

This is the same Fauci whose federal agency gave more than $400,000 to support a grisly experiment that involved scalping second-trimester aborted babies and then implanting their skins onto rodents… the same Fauci who supported Biden’s reversal of the Mexico policy resulting in the funding of the killing of preborn babies in other countries.

The Catholic Church has always been clear about its teachings on abortion and calls it an intrinsic evil.

Even amidst this craziness all is not. When you feel as though you’re the only one out there remember you are not. There are people all over the world that have not bowed down to the gods of the Left and when we band together, we can make a difference.

And here is a fun example: the “Let’s Go Brandon” song by rapper Bryson Gray which despite being banned on YouTube reached the top of the charts on iTunes just the same.

YouTube banned the music video, citing “medical misinformation,” referring to a lyric that says, “Pandemic ain’t real, they just planned it.” Another says, “Biden said the jab stops the spread, it was lies.” The lyrics also mention Australia’s handling of the pandemic.

Gray said, “If you want to be honest, in this country, I know we like to say we’re all free, but in reality … only one side has free speech. They can say whatever they want about Jesus and just get away with it.” He went on to say that “we can’t even question, make a joke, then we’re banned on platforms if we do that.”

And yet, despite YouTube’s ban, his song still made it to the top of the charts. Look around you, this may be one of the most insane times to live in but this insanity is making it easier for us to point out to the people around us that what they earlier mistook to be compassion and acceptance and tolerance is in fact quite the opposite.

And we can also see there are whole new audiences ready to hear the truth especially as the powers that be attempt to force us into their new woke religion.

I’ll leave you with this brilliant song titled ‘Just Say No’ by RC the rapper.