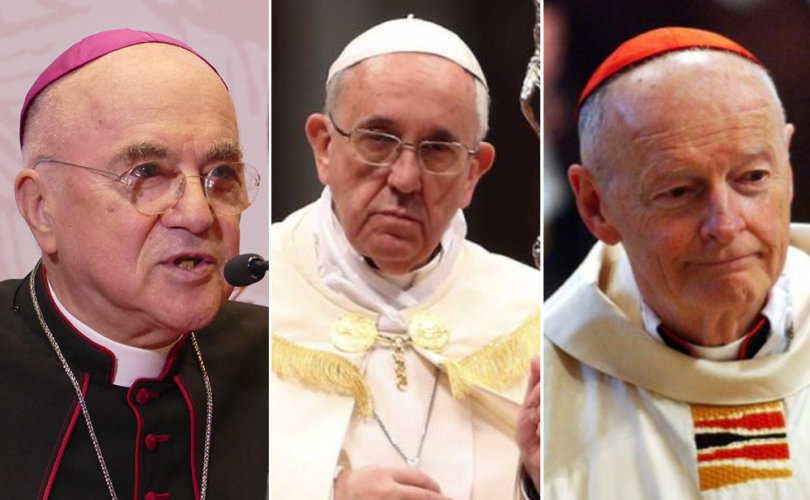 October 26, 2018 (LifeSiteNews) –The three recent testimonies from Archbishop Vigano have been the most important documents that LifeSite has published in its 21-year history. They have generated world-wide interest and numerous additional stories related to the testimonies that mark an historic time in the Roman Catholic Church.

Some are saying that the Vigano letters, especially the first one, “hit the Curia like an atomic bomb” and hopefully mark the beginning of a long overdue and very necessary cleansing of the Church, and especially the Vatican, of currently deep moral, financial and spiritual corruption.

Regardless, the testimonies, given that they have come from such a senior and highly regarded member of the Church hierarchy, have set off a firestorm of controversy, articles and many more revelations.

Because of the historic significance of this development we publish below a handy summary of the 88 articles that have appeared to date in LifeSite on the Vigano letters. The list begins with the three testimonies themselves and the remaining articles are grouped into major categories.

It is especially notable how many bishops have publicly noted that the archbishop’s testimonies are credible and deserving of serious consideration. The LifeSite list of such bishops is limited to mainly US bishops and is not intended to be a comprehensive list of all bishops in the world who may have also positively spoken about the Vigano testimonies.

We hope that this list will be seen as an important resource for promoting greater understanding of the historic nature and importance of the Vigano letters. We encourage all readers to promote this resource.

‘Bring the truth to the surface’: The amazing story of how Viganò released his testimony– Aug. 28

A who’s who of the Viganò testimony– Aug. 28

Viganò: Journalists must ask what happened to ‘cache of documents’ Benedict gave to Francis– Aug. 30

Archbishop Vigano: I did not want my silence to put other souls at risk and damn my own – 3rd testimony– Oct. 19

The third Vigano testimony: for a change, a pastor who talks about saving souls– Oct. 26

Cardinal Ouellet to Abp. Viganò: your testimony was ‘political’ and ‘extremely reprehensible– Oct. 7

The utter hypocrisy of Cardinal Ouellet’s attack on Viganò (by Phil Lawler) – Oct. 12

OTHER STATEMENTS BY VIGANO

Bishop Schneider: ‘no reasonable…cause to doubt truth’ of Vigano revelations about Pope– Aug. 27

10. Kansas bishop Carl Kemme praises Vatican whistleblower: Viganó is someone ‘Church could be proud of’– Aug. 31

13. Certain bishops are cause of continued presence of predators in seminaries and parishes: U.S. bishop – Sep 5

14. Archbishop Joseph Naumann: Viganò is ‘man of integrity,’ we must ‘ascertain the truth’– Sept. 6

18. Bishop Donald Hying: Viganò’s allegations against Pope must be shown either ‘true or false’– Sept. 12

19. Austrian bishop Laun hopes Pope will speak on Viganò report: ‘Silence would be a form of cover-up’– Sept. 17

43. List of bishops, cardinals who support investigating Viganò’s claims–  (Lists 21 bishops in addition to those noted above)

Francis’ top cardinal Parolin: ‘better not to go down into details’ about Viganò testimony– Aug. 30

Archbishop Mark Coleridge mocks Viganò: I wonder if he ‘thinks he… should be pope’–  Oct. 1

Cardinal Wuerl blasts Viganò testimony as ‘not faithful to the facts’– Oct. 12

OTHER SUPPORT FOR VIGANO

Is Abp. Vigano the agent of a cleansing fire for the Church? (Robert Royal)– Aug. 27

Why we know Vigano’s testimony is not just credible, but obviously true (by Dr. Joseph Shaw) – Aug. 29

Former presidential candidate on Viganò testimony: ‘This is a homosexual scandal’– Aug. 31

Franciscan Friars of the Renewal: Investigate ‘each and every allegation’ in Viganò testimony– Sept. 6

Ignatius Press founder to Pope Francis: ‘Be a man. Stand up and answer’ Viganò’s allegationsSept. 24

Over 47,000 Catholic women ask Pope if he covered up for sex abuser McCarrick, as Viganò claims– Oct. 24

Pope makes yet another cryptic reference to ‘Great Accuser’ amid Vigano allegations– Sept. 18

VIDEO: Pope says he received a ‘sign from God’ through Chinese bishops after Viganò testimony– Sept. 26

German newspaper: Pope’s silence on Viganò allegations has turned his ‘no tolerance’ into hypocrisy– Oct. 15

EWTN panel: Francis is damaging himself and Church by not answering Viganò’s allegations – Nov 1, 2018

Scott Hahn on Vigano letter: ‘It seems like a good time to pray like never before’–  Aug. 27

OTHER CRITICS OF VIGANO

The third Vigano testimony: for a change, a pastor who talks about saving souls