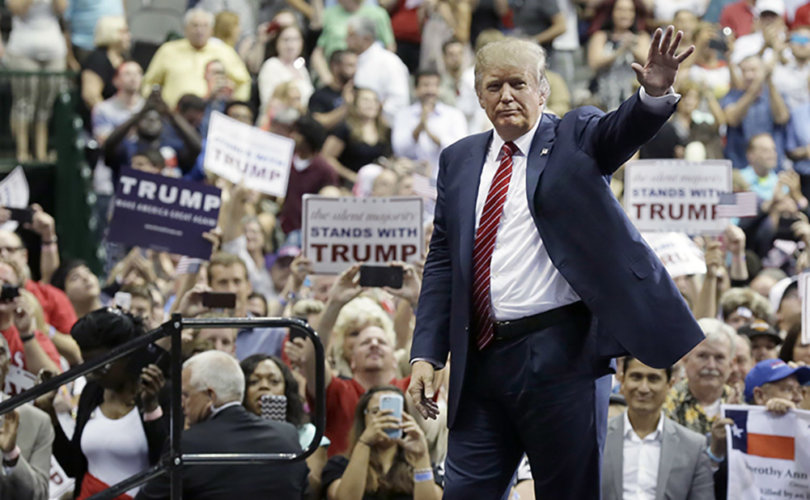 See the other parts of this series:

Part 2 – 68 more reasons to be grateful for President Trump.
Part 3 – Trump has saved many nations from evils of globalist Paris climate Agreement
Part 4 – The evidence: Trump fails on gay/trans/religious liberty issues
Part 5 –  Here’s why Trump is caving on gay ‘marriage’ and transgender ‘rights’’

July 14, 2017 (LifeSiteNews) – Last November 16, I republished an intriguing article positing whether Donald Trump could be the new Constantine. That historic Roman emperor “was no pillar of virtue,” but he nevertheless liberated Christianity from the oppressions of the pagan Empire. Given Trump’s highly praised speech in Poland last Thursday, his increasing pro-life instincts that have led him to take many strong pro-life actions, such as offering to help Charlie Gard, and numerous other positive actions by the President since his election, the premise of the article now seems more believable.

Beyond the above, however, there is growing realization that the United States itself is in danger at this time due to extreme, out-of-control leftist reactions to Trump’s election win. Jonathon van Maren, in a Jan. 16 article, presents strong arguments that “The Second American Civil War” is underway.

The June 14 attempted massacre of Republican legislators was done by a Bernie Sanders supporter and follower of the massively wealthy, partially Soros-funded, Southern Poverty Law Center. This violent act was an almost inevitable outcome of the on-going, hate-generating media and Democrat opposition campaign against the Trump administration.

The Public Theatre play in New York, sponsored by the New York Times, New York Magazine and Time Warner nightly presented the assassination of a Trump-like character. Comedian Kathy Griffin held up a mock severed head of the president and prominent persons such as Johnny Depp, Snoop Dog, Rapper Big Sean, Madonna, Adam Pally, British journalist Monisha Rajesh and others have joked, sang or clearly indicated they would like to see an assassination of the United States president.

All of these people are strangely being permitted to encourage a climate of extreme political violence. In my opinion, they should be charged and convicted of inciting hatred of the president in a manner that is endangering the life of the president and many of his aides. And it seems that all of these people are also enemies of the life, family, and faith that are precious to genuinely conservative Americans.

There is now a strong case for insisting that ALL conservatives and people of authentic faith must forcefully speak out and support President Trump — and constantly pray for him and the members of his administration. This is necessary, regardless of his shortcomings, because Trump and his administration are under an historically unprecedented and dangerous campaign to destroy his legitimate presidency because of hatred for the strong conservative policies that he has been implementing.

This is a grave threat to the democratic process in the United States, a threat to the continuation of the Republic itself and a danger to the world in that a takedown of the Trump presidency would facilitate a rapid advancement of the secular, globalist New World Order and its planned world governance.

Essentially, Donald Trump and his Cabinet and other key staff are now the only significant force standing in the way of the New World Order elites’ plans.

That is a reality, no matter the questionable tweets, personality flaws, still unfulfilled promises and other genuine concerns about Donald Trump. Those are minor issues at this time compared to the alternative of what would happen if Trump were forced out of the presidency or his presidency was crippled by this growing effort by revolutionaries to overthrow the legitimate government because their anointed candidate, Hilary Clinton, did not defeat Trump.

On Feb. 3, I wrote the article, “The surprising real reason for the hate against Donald Trump.” That article received more readership and comments than anything that I have ever written. The article and its warnings about the globalists were even more accurate than I realized. Events have moved faster and with greater fury than I could have imagined, confirming my observations and worst fears.

So what has been so special and so important about Donald Trump many will ask, given the massive volume of negative reports on the man and his administration from the time that he began his run for the presidency?

In a prior Sept. 16 blog post, “Donald Trump has undergone a transformation in recent months that many did not think possible”, I noted many developments that gave much hope that the rude and crude candidate that we saw during the leadership debates was growing into someone social conservatives could support. Little did others and I realize how much further Trump would grow to become an impressive conservative leader.

Cardinal Raymond Burke was quick to perceive the election of Donald Trump had more significance than most realized.

Burke stated Trump’s win suggested America has ‘awoken’ to its moral crisis and that, contrary to pro-life skeptics, the election was a victory for the pro-life cause. So far, events have proven that Burke’s assessment has been more accurate than most could have imagined.

Trump quickly appointed pro-life stars of exceptional personal character to his Cabinet and other key positions, including Vice President Mike Pence, Attorney General Jeff Sessions, HHS Secretary Tom Price, Counselor to the President Kellyanne Conway and Reince Priebus. There are now many more. It may be that Trump has surrounded himself with more truly conservative individuals and solid Christians than have most presidents in the recent past.

All of them have been delegated with heavy responsibilities by Trump. Mike Pence has been playing a leading, very active role as vice president, contrary to the lame-duck situation in which many past presidents have tended to place their vice presidents.

Things have dramatically changed since the primary battles. Today, most of the “never-Trumpers” have had to admit that they were wrong about Donald J. Trump. And the few that are still hanging on to their animosity should finally wake up and get over it.

Trump’s July 6 speech in Warsaw was an historic watershed for Trump and perhaps also for Europe. If you doubt the significance of the speech read the article, The Emerging Trump Doctrine: The Defense of the West and Judeo-Christian Civilization.

As no other Western leader has done for many years, Trump cut right to the core and bluntly warned the West of the great danger it is facing,

“The fundamental question of our time is whether the West has the will to survive … Do we have the desire and the courage to preserve our (Christian implied) civilization in the face of those who would subvert and destroy it?”

Strong, traditional principles and references to God were enunciated throughout the speech:

“We put faith and family, not government and bureaucracy, at the center of our lives. … And above all, we value the dignity of every human life, protect the rights of every person, and share the hope of every soul to live in freedom.”

Trump’s stunning speech is seen by some to have been even more insightful than any of President Reagan’s and much more understanding and supportive of the desires of Polish and other faithful European Christians than anything that has come from Pope Francis and the Vatican in recent years. How ironic.

On the life issues, Trump has proven to be more of a doer than almost everyone expected. There is of course much more still needing to be done, and there have been words and actions by Trump that can be legitimately criticized, but we would be foolish to not be grateful for what has been achieved.

Marjorie Dannenfelser of the influential Susan B. Anthony List was a firm “never-Trumper.” But now, after Trump’s implementation of many pro-life measures, Dannenfelser told the Hill on June 20:

“When it comes down to actually getting concrete policy done, you couldn’t ask for a better White House… “It’s far more solidly committed to the life issue than any other White House has been.”

Trump’s successful nomination of pro-life Neil Gorsuch to the Supreme Court has already transformed the court in a positive direction. Trump promised a strict constitutionalist Supreme Court justice. He has delivered that as evidenced by Gorsuch’s solid judgments since his appointment. Given an opportunity for one more such appointment, Trump will have set in motion a dramatic return of America back to constitutional government. He has also nominated many conservative justices to other senior court jurisdictions.

Trump’s withdrawal from the Paris Climate Agreement was a gutsy, massively important action by the president. 195 nations had already signed the Agreement and Rex Tillerson and Trump’s daughter Ivanka and her husband were strongly urging him to not withdraw from it. Disregarding all of that, Trump did what he believed was right for America and for the world and which hardly any other world leaders had the courage and conviction to do.

Trump’s lone, bold rejection of the supposed world consensus on this issue may later prove to have been his greatest ever action as president. I will expand on the significance of this Climate Change action by Trump in another article on Monday.

Trump’s visit to Europe and the G20 last week resulted in other astonishing actions that, although not directly related to LifeSite issues, except for the climate change agenda, showed Trump to be a much more capable conservative statesman than most thought he could ever be.

Trump: Freedom is ‘given to us by God, and no earthly force can ever’ take it away

Trump: ‘We worship God … We will not back down from doing what is right’

Trump: ‘We’re getting out’ of ‘very unfair’ Paris Climate Agreement