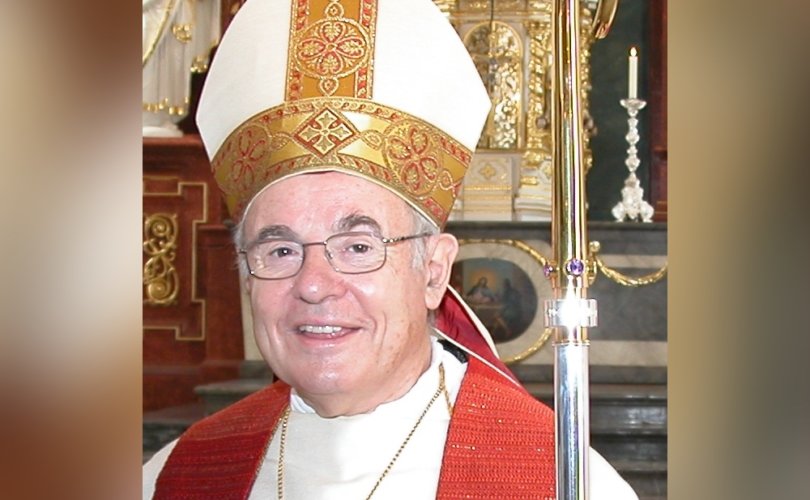 November 22, 2019 (LifeSiteNews) – Ivo Fürer, the retired bishop of Sankt Gallen – who, from 1996 until 2006, hosted the “Sankt Gallen Group” for their yearly meetings in the Swiss town Sankt Gallen – has now written an extensive history of the Council of the European Bishops' Conferences (CCEE), whose key organizers were also closely connected with the Sankt Gallen Group.

Fürer had been the CCEE's general secretary for twenty years, from 1975 until 1995, when he then became the bishop of Sankt Gallen. (Pope John Paul II famously once stated that Fürer's problem was that he came from Sankt Gallen.) The Sankt Gallen Group effectively headed up the CCEE for 24 years, from 1979 until 1993, because two of its members, first Cardinal Basil Hume and then Cardinal Carlo Maria Martini, were the presidents of the CCEE from 1979 until 1993. The Sankt Gallen Group also had, however, prelates as their members who had not played a pivotal role in the CCEE, such as Cardinal Walter Kasper.

In addition to Fürer's extensive book detailing the history of the CCEE – which is called The Development of Europe is Challenging the Churches (2018) –  this Swiss bishop also published his own autobiography, Church in Changing Times (2018), which LifeSite has reviewed already.

As this Swiss prelate shows, the CCEE was founded in 1971, not long after the Second Vatican Council, and it aimed at fostering a new decentralization. This spirit of decentralization went so far among these founding bishops that they did not even ask Rome at the time to approve of their statutes when they founded the CCEE under the reign of Pope Paul VI.

But, more importantly, Dr. Fürer describes the later internal battles between some leading figures of the CCEE – especially Cardinal Carlo Martini, the later head of the Sankt Gallen Group – and Pope John Paul II. This conflict led finally to the Pope's changing the rules of the CCEE in 1993 so that only a president of one of the European bishops' conferences could become the president of the CCEE, thus making it impossible to enable the re-election of Cardinal Martini, who was still at the time (1993) its longstanding president. This decision seems to have reduced the dominant influence of Martini's reform faction within the CCEE, which was in turn one of the main reasons for the founding of the Sankt Gallen Group three years later, in 1996, after also Ivo Fürer had been removed from his position as the general secretary of the CCEE by being appointed bishop of Sankt Gallen in 1995.

Additionally, Pope John Paul II, already in 1991, had effectively excluded the members of the CCEE from participating in the organization of the Special Synod of Bishops on Europe in Rome which was organized in light of the changes in Europe after the decline of Communism in 1990. With regard to this papal decision, Dr. Fürer even quotes voices who called this 1991 synod in Rome an “anti-Martini synod.”

After Cardinal Martini's removal from the CCEE in 1993, he became the leader of the Sankt Gallen Group which was composed of many of the bishops who had earlier been active in the CCEE, but who had lost influence after the Pope's intervention.

Let us recapitulate this history a little bit more in detail.

After the founding of the CCEE in 1971, this group of bishops from Europe had strong progressivist leanings. For example, in 1974 they were already openly discussing the possibility of admitting remarried divorcees to Holy Communion. They also wished to work for a decentralizing “continentalization” of the Universal Church, a goal that we see further  promoted by Pope Francis today.

As it is also the case today, this continentalization essentially meant a disrespecting of the central Roman authority. As Professor Paul Zulehner states in his Foreword to Fürer's history of the CCEE about the founding of the CCEE: “A Roman approbation was not requested.” In the course of the following two decades, there took place a “tug of war” between Rome and the CCEE concerning the question of “who is representing the Catholic Church in Europe,” explains the Austrian theologian and priest. The CCEE wanted to get away from a specifically critical view upon Europe's ongoing secularization and, instead, was inclined to look more to the “life experiences” of the people of today.

As Cardinal Martini put it in 1989: “Evangelization means that the Church learns and teaches.” Explains Zulehner: “A catechetical procedure is being turned into a dialogical process in the midst of the life experiences of our contemporaries.” Here may already be seen the dismissive view upon the teaching of the catechism and, instead, the promotion of the idea that one has to learn from the people, an attitude we can also see today more fully developed under Pope Francis.

However, John Paul II was not pleased with the leanings of the CCEE and their presidents (first Cardinal Basil Hume – who always stressed that he did not care much about what Rome said – and then Cardinal Martini). When the Pope, in 1990, started to organize the 1991 Special Synod of Bishops on Europe, he did not even inform Cardinal Martini about these plans. As Zulehner explains it in his Foreword, the Catholic bishops from the former Communist countries in East Europe mistrusted the liberal West and even the “post-conciliar theology and pastoral” approach with which they had not been familiarized due to their having been largely cut off from the West. These bishops “had no true trust in the leadership of the CCEE and Martini whom they accused of having too much understanding for the modern culture.” As Zulehner says it: “some people disliked Martini's concept of evangelization.” For, they rather preferred “a traditional instruction,” according to Father Zulehner.

Among the influential bishops within the CCEE over the years were Cardinal Godfried Danneels, Cardinal George Basil Hume, Cardinal Roger Etchergaray, Cardinal Cormac Murphy-O'Connor, Cardinal Karl Lehmann, Cardinal Josef-Léon Suenens, Archbishop Alois Sustair, Bishop Josef Homeyer, Bishop Egon Kapellari, and, of course Martini. Father Zulehner as well as Father Hans Langendörfer, S.J. – who now is the general secretary of the German Bishops' Conference – were also active in the CCEE. Cardinal Silvestrini of the Roman Curia was a close and sympathetic collaborator of the CCEE in Rome. (He was later to be part of the Sankt Gallen Group, as well.) When Ivo Fürer became the general secretary of the CCEE in 1977, the seat of the CCEE was moved from Chur to Sankt Gallen. Fürer became the bishop of Sankt Gallen in 1995, but had been the general vicar in that diocese for more than two decades.

After Communism had apparently fallen, Pope John Paul II had optimistically hoped that the bishops from Eastern European countries, with their experience of martyrdom and of a life under dictatorships, would help revive the Catholic Faith in the West. For example, the Pope told Martini in 1993 that he wished “a stronger influence of the countries of the East in the CCEE,” according to Fürer.

As Zulehner writes in his Foreword, there existed plans in Rome to take better control over the Catholic Church in Europe, to weaken the CCEE by giving the Pope the power to appoint the secretary of the CCEE and by moving the seat of the CCEE to Rome. However, many of these plans were never implemented. But, as Zulehner explains, Rome succeeded in “avoiding that important cardinals of Europe (such as the German Cardinal Lehmann) were elected as president. The new presidents were rather pale.” Rome also made sure to send delegates to the assemblies and conferences of the CCEE, and they even insisted upon receiving ahead of time the final speech of the standing president of the CCEE.  Zulehner calls these measures a “strange method of control,” but they show that Rome mistrusted the inordinately progressive CCEE.

Therefore when, in 1990, Pope John Paul II established a preparatory commission for the 1991 Special Roman Synod on Europe, “the president of the CCEE, Cardinal Carlo Martini, did not know anything of this group. The CCEE was not represented in it. One obviously did not want to incorporate into the preparations of the synod the twenty-year-old experience” of the CCEE, as Fürer explains. “Or did some fear the influence of personalities like Cardinal George Basil Hume and Cardinal Carlo Maria Martini?” Fürer asks. He adds that there could also have been “the concern that the secularized spirit of the West could enter into the former Communist states.” According to Ivo Fürer, then-Archbishop Jan Schotte played a leading role in excluding the CCEE from the new synod preparations.

In their submission to the preparatory council in July of 1991, the CCEE proposed an “inculturation of the  faith in Europe” and rejected a “moralizing attitude” of the Church. The CCEE also wished to have an empowerment of local churches.

During the Synod on Europe itself, which took place from November 28 until December 14, 1991, the CCEE had fairly little formative influence. As Fürer now notes, some of the leadership of the synod “showed an attitude which wanted to weaken the influence of the CCEE. One noticed an enmity against the strong personality of the president of the CCEE, Cardinal Carlo Maria Martini. Some spoke of an 'anti-Martini synod.'”

In light of these developments and also in light of the fact that the leading figures of the Sankt Gallen Group – Lehmann, Danneels, Hume, Kasper, Martini – bear a grave responsibility for the slackness and loss of faith in Europe, it still remains a mystery why Pope John Paul II, after he effectively weakened their influence within the CCEE from 1993 on, still made several of them cardinals in 2001. Some members of the Sankt Gallen Group were then made a cardinal: Cormac Murphy-O'Connor, Audris Bačkis, Walter Kasper, and Karl Lehmann.

And it still also remains a mystery that these figures, in spite of their being removed from the CCEE still had enough organizational power so as to have possibly some decisive influence with regard to the election of Pope Francis in 2013. The Diocese of Sankt Gallen issued in 2015 a statement about the Sankt Gallen Group and stated that Bishop Ivo Fürer “never hid his joy about the election of the Argentine.”