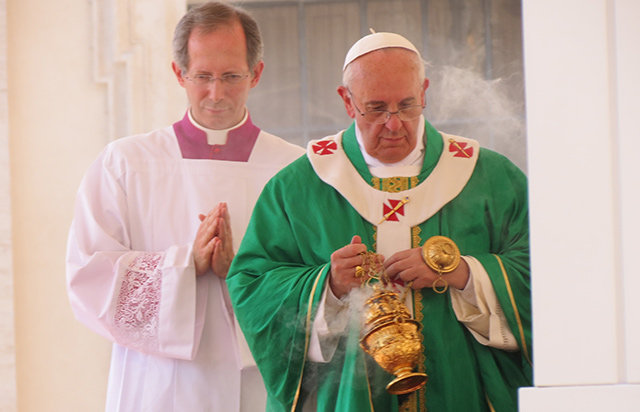 “In response to my questioning, Pope Francis said, ‘Gender ideology is demonic!’” Bishop Laun wrote in his essay, adding that the pope was not exaggerating in his comment.Steve Jalsevac/LifeSiteNews.com

ROME, October 26, 2019 (LifeSiteNews) – Several voices have come to LifeSiteNews expressimg strong opposition to the presence of the pagan statues of Pachamama in the Vatican, especially in light of the Pope's public defense of these statues and also in light of his identifying them to be Pachamama statues. In addition to a bishop, one theologian priest, two parish priests, and a canon lawyer have written short statements, especially in light of the possibility that Pope Francis might further decide to welcome these statues – which had been thrown into the Tiber River but are said to have been now retrieved – at a closing Mass at St. Peter's tomorrow Sunday, the Feast of Christ the King in the traditional calendar.

The canon lawyer who spoke to LifeSite, on the condition of anonymity, says that “the display of the Pachamama statues in a Catholic church is a violation of canon law.” He pointed to canon 1188 of the Church's Code of Canon Law, which speaks about the display of sacred images in churches.

First of all, canon 1188 says that sacred images may be displayed in churches, but the canon lawyer points out that the Pachamama statues themselves are “graven images,” in the language of the Bible, that is to say, pagan idols. In Exodus 20:3-6 God forbids making graven images for the purpose of idolatry, thus inviting people to adore created things instead of the Creator Himself. That is to say, the display of non-sacred images in churches is forbidden by canon law.

Secondly, the canon states that sacred images may only be displayed so as not to “excite less than appropriate admiration among the Christian people.” It is forbidden thus to display images in Church that are confusing or disturbing to the faithful.

Third, as our canon law expert explains, canon 1188 forbids the display of images that “give occasion for an undue devotion.” (These translations come from our source.)

Thus, there are three points in canon law that forbid the display of Pachamama in St. Peter's Dome.

Here, the canon lawyer also refers to Proverb 95:5, according to which “all the gods of the gentiles are devils.”

To consider now a bishops' view on this matter.

Bishop Marian Eleganti, the auxiliary bishop of Chur, Switzerland, has given LifeSiteNews a short statement with regard to today's news that the Pope apologized for the Pachamama idols having been taken and thrown into the Tiber River, and said that they were displayed in a church “without idolatrous intention.” Eleganti is himself troubled by this new papal statement, especially since, even if one accepts the Pope's recent words that the statues have no intended idolatrous meaning, “there would still remain the scandal that, at least, it looks like such [idolatry] and that the Rock of Peter [the Pope] is not at all getting worried about it.” On the contrary, says Eleganti, the Pope “even defends those rituals conducted in the Vatican Gardens” which are “alien to Christianity.”

The Swiss bishop would have wished that Our Lady of Guadalupe would have been on display instead, since she represents the Blessed Virgin with some “indigenous traits and symbols.”

“It is not understandable to an observer that the publicly displayed veneration of Pachamama at the Amazon Synod is not meant to be idolatry,” he adds.

Professor Hubert Windisch, a Catholic priest and theologian from Germany, recalls the First Commandment, that we may not have false gods beside God. In light of what is currently happening in Rome, he comments: “If the Faith of the Church – as laid down in the Nicene Creed – is being darkened by the words and deeds of the hierarchy, and if it be the ones of the Pope, not only shepherds and theologians, but also the laypeople of the Church have to make a clear resistance.”

Moreover, Father Frank Unterhalt, from Paderborn, finds a connection with the recent controversy about Pope Francis' Abu Dhabi Statement, in which he says that the “diversity of religions” is “willed by God.” Unterhalt says: “The current actions in the Vatican with the display of the Pachamama statues seem to be a continuation of the heretical document of Abu Dhabi. Saying therefore that the pluralistic diversity of religions is in accordance with God's will means identifying oneself as false prophet.”

A Catholic priest from the Netherlands, Father Paolo D'Angona, sent LifeSiteNews his longer homily prepared for the upcoming Sunday's traditional Feast of Christ the King and which also makes a direct reference to the presence of Pachamama in the Vatican. He reminds us of the Psalm 95:5 which says that “all gods of the gentiles are evil spirits.” In this light, it is then clear that “he who follows an idol follows a lie. But we wish to follow the truth, that is to say, Christ.”

Therefore, Father D'Angona concludes his homily with the words: “We want to consecrate ourselves to Christ and withstand the devil and all his works, that is to say any kind of idol, whatever be their names, e.g.,: Baal, Apollo, Odin, Shiva, or Pachamama.”

The Pachamama is not the Virgin Mary, the Mother of the Church. It is not conceivable that in the Vatican Gardens people fell on their faces in front of her, that she stands everywhere in prominent places and is being carried around, where it would be better to honor and display the miraculous image of Our Lady of Guadalupe. This grace-filled image is an image of the Virgin May, given to us by Heaven, that is unambiguous and at the same time inculturated, with indigenous traits and symbols. It is not understandable for an observer that the publicly displayed veneration of Pachamama at the Amazon Synod is not meant to be idolatry

And even if this were to be the case [that the veneration of Pachamama is not idolatry], there would still remain the scandal that it at least looks like such and that the Rock of Peter [the Pope] is not getting worried about it, but, instead, even defends those rituals conducted in the Vatican Gardens that are well documented and alien to Christianity and that he at the same time regrets the strong, but understandable reactions.

The Triune God may be adorated!

“They have no knowledge those who carry about their wooden idols, and keep on praying to a god that cannot save. There is no other god besides me, a righteous God and a Savior; there is no one besides me” (Isaiah 45: 20-21).

The current actions in the Vatican with the display of the Pachamama statues seem to be a continuation of the heretical document of Abu Dhabi.

Saying therefore that the pluralistic diversity of religions is in accordance with God's will means identifying oneself as false prophet.

God, who revealed Himself to Moses in the burning bush as the I-Am-Here (Ex 3:14), has spoken to the fathers many times and in manifold ways, through the prophets. In this end time, however, He has spoken to us through the Son (see Hebrews 1:1-14) who is the way, and the truth, and the life and without Whom nobody can come to the Father (see John 14,6). “There is salvation in no one else, for there is no other name under heaven given among mortals by which we must be saved” (Acts 4:12). There may not stand any other gods next to Triune God as revealed to us in and through Jesus Christ. (see the First Commandment of the Decalogue).

If the Faith of the Church – as laid down in the Nicene Creed – is being darkened by the words and deeds of the hierarchy, and if it be the ones of the Pope, not only shepherds and theologians, but also the laypeople of the Church have to make a clear resistance.

Rev. Father Paolo D'Angona from the Diocese of Roermond (Netherlands)

An excerpt from his homily for Sunday's Mass on Christ the King (the traditional Feast):

Because Christ is our God and King, we wish to give Him our whole heart, but also wish to defend him courageoulsy. We may not be dominated by the golden calves of our time, with all their ideas and practices that stand in opposition to Christ. All these are idols, with which we Christians have nothing to do.

He who follows an idol follows a lie. But we wish to follow the truth, that is to say, Christ. He speaks  in today's Gospel not only to Pilate, but also to us: “I am a King, for this I have been born and have come into the world, that I may bear witness to the truth. He who is in the truth hears My voice.”

And the Holy Apostle John writes in his first letter: “And we know that the Son of God has come and has given us insight that we may recognize the True God and that we may be in His True Son. This is the true God and the eternal life! Children! Beware of the idols.” (1 John 5:20)

We follow these tender and at the same time quite serious words of St. John, because we wish to remain loyal to our baptismal vow. We want to consecrate ourselves to Christ and withstand the devil and all his works, that is to say any kind of idol, whatever be their names, e.g.,: Baal, Apollo, Ohin, Shiva, or Pachamama. “Because,” as the psalmist says, “all gods of the gentiles are evil spirits.” (Ps. 95:5)