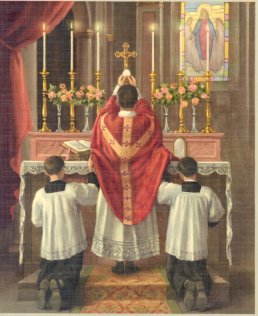 July 30, 2021 (LifeSiteNews) – Dr. Martin Grichting, a priest and former vicar general of the Diocese of Chur, Switzerland, has once more spoken out regarding the recent July 16 motu proprio against the Traditional Latin Mass. He now argues that, instead of “beating the faithful with the shepherd's crook,” Church leadership should actually listen to the faithful, seeing in them the “spirit of God” being active, yearning for a reverent sacrifice of the Holy Mass.

This is a very helpful commentary (full text see below), especially since Dr. Grichting does not celebrate the Traditional Mass (as he stated here). But he has the honesty and the courage to listen to the many faithful who are drawn to the ancient form of the Roman Rite, with its reverence and silence.

In very good words – and speaking for my own heart, too – Dr. Grichting speaks of the “laity, who are incessantly exposed to a rain of words [at the Novus Ordo Mass]. This overwhelms them and not infrequently generates the bad conscience of not having been attentive during the Mass. At the same time, the words of varying weight that are poured over everyone almost non-stop leave the soul dangling in the void.”

He states that the soul is not fed, and the new Mass too much points to the intellect, instead of touching heart and soul and mind.

With much gratitude, I publish below this statement of Dr. Grichting, because he calls upon the Church hierarchy to listen to the faithful and learn from them what they find missing in the new liturgy.

The faithful of the ‘Extraordinary Form’ are the symptom, not the disease

As long as the Church leadership is not able to approve for the whole Church a form of liturgy that again truly helps to lift the heart to God, it is implausible to accuse those who articulate a problem that the Church leadership itself has caused. The day when people will have the courage to face the real problems of the liturgy will come.

I really became aware that the liturgy created after Vatican II has regrettable shortcomings and leaves the faithful spiritually as well as emotionally starved when I became vicar general. For now I was no longer a celebrant as a parish priest, but much more often a concelebrant at episcopal liturgies. Functionally, I was thus not unlike the lay people who participated in the celebration of the Eucharist: fellow worshipers, secularly speaking: Spectators and, above all, listeners. It was then that I realized how  this form of the liturgy is one-sidedly oriented to the intellect. It can be enriched – especially in German-speaking countries – with genuinely spiritual songs. The church building can be majestically built and beautifully decorated. Ideally, the liturgical vestments are also something for the eye. The ear intermittently may get its reward with brilliant organists. But architecture and concert are no substitute for spirituality. And the enjoyment of aesthetics is not to be confused with the living relationship with God. So it remains that, during the course of an hour, one is sprinkled in one's mother tongue with words that one understands, but with the best will in the world can only take in intellectually to a small extent. In the weekday Masses the problem is aggravated because it is even more influenced by the word – and this does not mean the Word of God. Even the most diligent, who follow the liturgical texts on their cell phones so as not to be too distracted, must at some point acknowledge that they are reaching their limits.

If you are the celebrant yourself, the situation is different. One must concentrate on the texts, if only to recite them correctly. Moreover, one is always the doer. This alleviates the problem of attention and allows the aspect of feeling to fade into the background. This probably has the effect that many bishops and priests have so far felt too little understanding for the laity, who are incessantly exposed to a rain of words. This overwhelms them and not infrequently generates the bad conscience of not having been attentive during the Mass. At the same time, the words of varying weight that are poured over everyone almost non-stop leave the soul dangling in the void. The heart is rarely really reached. It is not warmed, but ignored. From this suffers the presentiment and respect for the sacred. And it is only when these come alongside intellectual apprehension that man is kept in the Faith. For otherwise Faith runs the risk of becoming at best an interesting intellectual occupation. But it no longer captivates the whole person.

The celebrant, who is turned towards the people and talks to them incessantly, does the rest. Much has already been said about this. Even if one expressly withdraws oneself and does not want to act as an entertainer, nor does one put one's own subject in the foreground through political or other good-human interludes: The fact that one represents Jesus Christ as a priest is the theological truth. That one nevertheless stands far too much in the foreground with one's personality, which is perceived as more or less appealing, is the reality perceived by the faithful.

The English writer Gilbert K. Chesterton once said that Protestants believe that God can only be worshipped by way of thinking. Catholics, he said, would do it with all their senses. He said this even before the liturgical reform of Vatican II. For today we have arrived at more or less this Protestant position. This is true even if the liturgy is not pedagogically abused for the propagation of social or environmental concerns or serves as a field of experimentation on which the liturgical designers can live out their imagination.

There would be still much to say, first undoubtedly about the sacrificial character of the Mass, its quality as participation in the divine liturgy rather than as a gathering of “celebrants,” and so on. I would like to content myself here with the phenomenological reflection that tries to put itself above all in the position of the laity.

On leaves these lay people spiritually hungry. And what do they do? They break away from the flock. They seek their nourishment elsewhere. The longer I watch this after almost 29 years of priesthood, the more convinced I become: The faithful, despised by the powerful, who have found a home in the extraordinary form [of the Roman Rite], are the symptom, not the disease. Instead of beating them with the shepherd's crook, one should consider for once that they articulate – perhaps sometimes in an awkward way – a problem. If – as can be seen especially in France and the USA – now again relatively many young people (priests and married couples who are still open to children) prefer the Extraordinary Form, it would correspond to spiritual prudence in the sense of St. Benedict to ask oneself whether the Spirit of God does not also speak from these young people.

Priests, who are closer to the faithful than liturgical theorists and curial experts of the liturgy, feel more and more that many lay people suffer, consciously or unconsciously, especially from the celebration of the Eucharist. Quite a few, especially older ones, liturgically endure what for them can no longer be changed. They remain faithful to the end and represent the typical worshippers today. Others stay away disappointed with the passage of time. For they have had the experience long enough that they have not been edified as well as comforted and that they have not stepped out of the church hall supported in their being Christians, which is difficult nowadays anyway. Of course, aging and staying away have other reasons, but liturgy is also one of them. Who wants to deny it?

As long as the church leadership is unable to approve for the whole church a form of liturgy that again truly helps to lift the heart to God, it is not convincing to accuse those who articulate a problem that the church leadership itself has caused. Instead of harassing these believers, the church leadership should seek to understand what the Spirit of God is saying through these faithful, especially through the many lay people among them. As long as this does not happen, diocesan bishops should exercise reason in the face of a universal church disciplinary law that hurts and divides. The easiest way to do this at the diocesan level will be through generous dispensations from the norms of this law.

The day will come when, on the part of the Church's leadership, one will have the courage to face the real problems of the liturgy. For they persist. They cannot be eliminated with a law. However one judges natural selection according to Darwin: There is a supernatural selection, and it is at work.

Martin Grichting was vicar general of the diocese of Chur (Switzerland) and publishes essays on philosophical and theological issues.