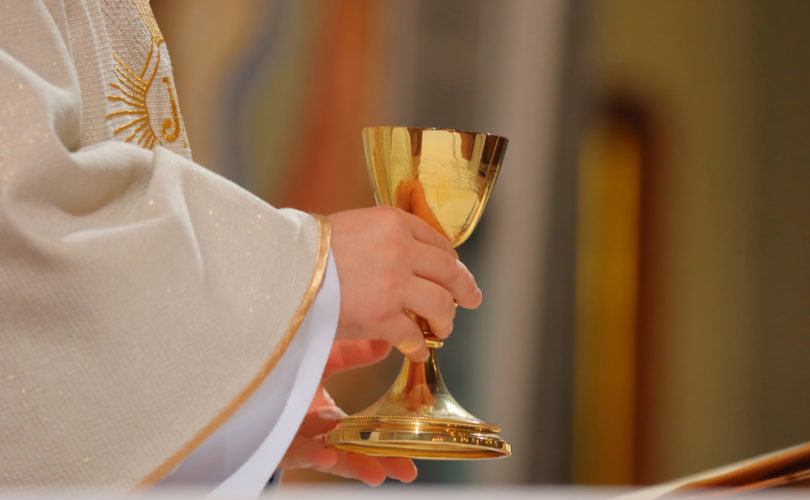 May 14, 2021 (LifeSiteNews) — A Swiss priest was civilly married on his deathbed last April, shortly before being plunged into an artificial coma by way of palliative care, putting an end to 30 years of silence about his ongoing relationship with a former nun.

Although he opened up about the situation to his bishop, Charles Morerod of Lausanne, about a month before he died, “Father C” received a full Catholic funeral with the honors due a priest. His chalice and paten were placed on his coffin as if the situation were completely normal, and Bishop Morerod even spoke openly during his farewell homily about the priest’s partner.

He called her “the faithful friend of his heart, for 30 years.” “I am grateful to him for his ministry. At the end, he confided to me that being a priest had been the most beautiful mission in the world.”

The Swiss official Catholic website cath.ch reported on the case, presenting it as the legitimization of “30 years of love that never affected (the priest’s) accomplishment of his ministry.”

The news website also made abundantly clear that Bishop Morerod concelebrated the funeral with “full knowledge” of the case.

The story went public on May 9, when “Father C’s widow gave an interview to the national press. She told Le Matin Dimanche about the relationship that had been kept secret for so long, although it was apparently an open secret for many.

The newspaper’s commented that the story sheds a “new light on priestly celibacy.”

Father C’s early death at age 62 was caused by lymphoma. When it became clear that he would die, the couple decided to lift the veil on their relationship, as the former nun later explained. Their decision to marry was not a “militant” gesture, according to Le Matin Dimanche, but a response to their desire for “coherence and acknowledgment,” which led “Mrs. C.” to quote St. John’s phrase: “The truth will set you free.”

According to Le Matin Dimanche, the Pope himself has been informed of the circumstances of Father C’s civil marriage and death and “is praying for him.”

After the funeral, Bishop Morerod sent the following statement to all the “pastoral agents” of the diocese of Lausanne:

I would like again to express my gratitude to this priest for his ministry, which was very well expressed at his funeral. On the other hand, I turn to the living, keeping in mind the joy with which I receive the commitments of future priests: let us keep the impetus of the gift of ourselves, with the help of God and our mutual aid, let us renew our enthusiasm at the mercy of the unpredictable circumstances of our existence.

We have a beautiful message here, one that is often misunderstood both in the Church and outside the Church. If someone, after a discernment, thinks that he or she cannot persevere, let him or her tell me with the honesty that should mark the whole of our proclamation of the Gospel. Loving God is enough to fill one’s life. Certainly the love of God is not the prerogative of celibates, but we bear specific witness to it in this imitation of Christ.

This looks like a form of backpedaling regarding Morerod’s openness and lack of explicit disapproval of Father C’s last-minute civil marriage during his funeral homily. However, it should be recalled that Father C did not quit the priesthood in order to marry, as can happen according to canon law dispositions, but that he merely confirmed by his civil union that he had not lived out his commitment to celibacy for a long time and continued his ministry, in particular as a prison chaplain. Clearly, the poor father knew that he could not persevere in his priesthood and his priestly celibacy, but did not “discern” this and went on as if everything was normal.

Father C was at the head of one of the biggest pastoral units in Switzerland.

The upshot of such situations and media reports is confusion.

In her interview with Le Matin Dimanche, the priest’s “wife” gave a number of details about their relationship. A painter, the 52-year-old artist said about Father C: “The last few weeks, he was radiant despite the pain, as if something was coming into tune inside him.” She called their relationship “a contract between us and the Lord, a kind of miracle.” And while the civil marriage may not have been entered into out of activism, she did add that she hoped “that good fruits may come out of this.”

The now-“widow” had met Father C 30 years ago. He was a deacon, having entered the seminary quite late, leaving behind his professional experience and an intense love life. At the time, “Claire” — as the journalist called her — was a nun in a French convent. The deacon was on his way to Santiago de Compostela. The future priest’s “quest for the absolute” immediately struck her. They talked about love at first sight.

The young woman says that she heard a voice — which she believes to be that of Christ — in her mind saying, “Today, I am giving you a very big present.”

When the deacon set off again, “Claire” slipped a rose into his pilgrim’s shell. Ten years of a platonic relationship would follow: They wrote letters, prayed together at set times, and met once a year. “One day, ‘Jipé’ took my hand and that’s when the revolution happened,” she recalls. She ended up leaving her convent, urged by the “artistic emergency” that Father C. had “stirred up” in her.

This would lead to their souls growing closer — and also, “sometimes,” their bodies — she said, although overall they lived in “appeased chastity.” “We never felt we were in sin. We never lied about our relationship, but we never exposed it. Our obsession was not to shock people,” she added.

The faithful did realize the truth of the relationship. “One of us had met them hand in hand in France. Many knew about it, but few were offended. This secret did not seem to weigh on Jipé, who remained jovial,” one parishioner told the newspaper.

— Article continues below Petition —
PETITION: Support Archbishop Naumann's defense of LIFE as head of Bishops' Pro-Life Committee
Show Petition Text
25846 have signed the petition.
Let's get to 30000!
Thank you for signing this petition!
Add your signature:
Show Petition Text

According to “Claire,” their main fear was that of being found out and for Father C to have to leave the priesthood. Their response was to regularly “get away from Switzerland.” “To be able to sit on a terrace or to recharge our batteries in physical tenderness like a normal couple was good for us. But on the way back, Jipé would sit at the front of the train and I at the back,” she remembered.

She also said that the couple treated their relationship as a way to get closer to God: “If we had been orthodox, I would have become his wife. But the reality of our lives called us to spiritual fruitfulness, and becoming parents was never an option.”

This is just a step further in the rejection of the truth and discipline of priesthood and marriage, or a kind of mixing up of both in the idea that spiritual fecundity is an end of marriage whose proper end is deliberately rejected.