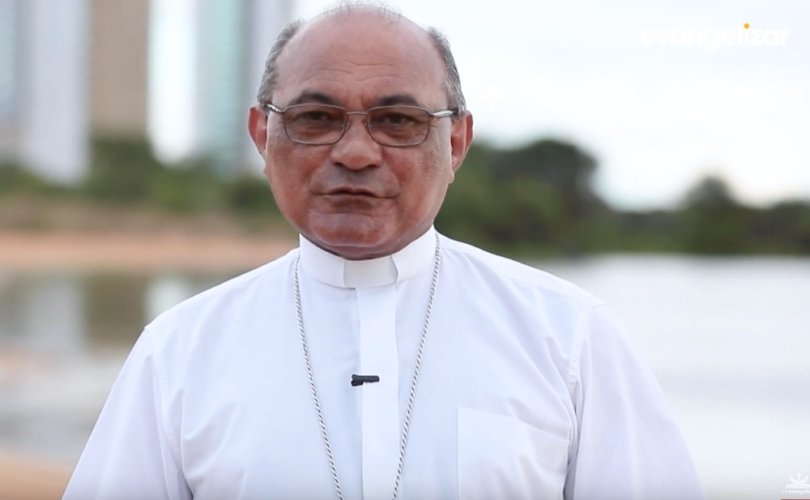 It’s officially Blessed John Henry Cardinal Newman Weekend here in Rome, at least for the British and other anglophones pouring into the city for Sunday’s canonization. His gentle, austere face is now on a banner hanging from St. Peter’s Basilica, flanked by banners celebrating four women: Mother Mariam Thresia of India, Marguerite Bays of Switzerland, Mother Giuseppina Vannini of Rome, and Sister Dulce Lopes of Brazil.

I received official accreditation to talk to representatives about these soon-to-be saints, so after Mass, cappuccino, and much animated typing, I went to the Sala Stampa to take part in the 11:00 a.m. “Meeting Point.”

The “Meeting Point” involved crowding around or queuing up near the representatives of the Blesseds. The earthly spokesmen for Cardinal Newman were Fr. Ignatius Harrison of Newman’s own Birmingham Oratory and Jack Valero, the press officer for the Newman Canonization Committee. At least three spokespeople for the female Blesseds stayed in the main auditorium of the Sala Stampa, but Valero got a room, Fr. Harrison an ornate hallway, and both a firm glass door shutting out the slavering Newman-centric journalistic hoards until they were prepared to see us.

First I followed some Italian journalists into the small sitting-room assigned to Valero, but the conversation was too rapid for me, so I retreated and waited at a distance while Christopher Lamb and Austen Ivereigh interviewed Fr. Harrison. The word “Brexit” reached my straining ears. This didn’t surprise me, for that is what everyone in Britain has been discussing for over three years.

At last it was my turn, and as there were two seats for journalists, another woman journalist accompanied me. This was Inés San Martín of Crux, whose work I very much admire, so I had a fangirl moment before I remembered why I was there.

I asked Fr. Harrison about Newman on conscience (“it provides a very certain and explicit link with the Almighty”) and on married priests (“he wouldn’t have understood”), and San Martín asked him what Pope Francis would have thought of him (“a subtle mind” and “not rigid”) and if he would have made Newman a cardinal (“yes”).

When we had given up our seats to the next two Newman-centrists, I went home to finish writing about Cardinal Müller’s interview with La Repubblica. I scarfed a caprese salad and then trotted back to the Sala Stampa to hear the latest on the synod.

This time there were four bishops and a German woman religious in the panel: Carlos Aguiar Retes, the Archbishop of Mexico; Pedro Brito Guimarâes, the Archbishop of Palmas in Brazil; Joaquín Pertínez Fernàndez, the Bishop of Rio Branco in Brazil; and Sister Birgit Weiler, described as a member of the Congregation of the Medical Missionary Sisters and a collaborator with the Peruvian bishops regarding the care of creation.

Archbishop Aguiar Retes described the Synod’s Instrumentum Laboris as a response in “integral ecology” and said it was essential to change our “culture of waste,” for an “apocalyptic disaster” is approaching.

Sister Birgit Weiler echoed the apocalyptic theme, saying that humanity will have a “good and dignified future only if we take care of the earth.” She also stressed that we have to live in solidarity with people and the earth, and that the Church can ask the support of governments in making sure mining companies don’t violate laws and rights in the Amazon.

Bishop Pertíñez Fernández talked about the history of the rubber industry in Brazil, and such was the brutality of the industry, it is said that every rubber tree there is a dead person. He quoted a Brazilian writer as saying that this was the “only example” in history when a person worked “to become a slave” of the company. Possibly the bishop (or the writer) had never heard the song “Sixteen Tons” or of the Kentucky coal industry.

If that’s so, it’s too bad because one way to “build a bridge” (a phrase I hear in Rome every day) between the poor of the global south and the ex-poor of the global north might be to draw parallels between their experiences of selling their souls to the company store.

Archbishop Pedro Brito Guimarâes talked about the damage agrobusiness does in his part of Brazil, being concentrated on cattle-raising and a single crop: soy. Cattle-raising uses a lot of water, and the massive acres of soy have led to soil erosion and pesticide contamination. He talked about “ecological sins”― thus providing many journalists their synod story of the day.

I was more interested in the questions about women. The National Catholic Register asked Sr. Birgit Weiler about her experiences as a woman participating in the synod. Fluent in Spanish, Weiler replied in good English to say the women felt like part of the group and there was no “clerical attitude.” She believes that in the future women will be asked to take up leadership positions in the Church. Sr. Birgit also said she hoped more women would do theology, which puzzled me, as I studied theology and my classes were packed with women. I have also met women students of theology in Germany and Poland.

Deborah Rose-Milavec of FutureChurch’s Focus News asked about the women of the Synod not being able to vote. Sr. Birgit said that this was a “strong topic” of conversation, but pointed out that just having 35 women at the synod was “already a sign of a step forward.” She hopes that one day women will be able to vote at the synod.

Then America got the microphone and asked Archbishop Brito Guimarâes about ecological sins.

A non-anglophone journalist in front of me had muttered and sighed when Sr. Birgit switched to English. When the questions ended, some of the more conservative journalists muttered and sighed because the less conservative journalists have been getting more than their fair share of the questions. Michael Voris was irate that nobody was able to ask Sr. Birgit if she opposed the all-male priesthood.

My husband appeared outside the Sala Stampa shortly afterwards, having flown to Rome from Edinburgh with many people bound for the Newman canonization. He reported having seen our own ordinary, Archbishop Leo Cushley, on his Ryanair flight. We were both edified that our archbishop had travelled with the budget airline. After the flight landed, Mark kissed the archbishop’s ring at the luggage carousel. As one does.

Then it was back to the apartment via the gelato counter to write another two articles. I got one and a half done before our late supper, and then finished the other half by 11:00 p.m.