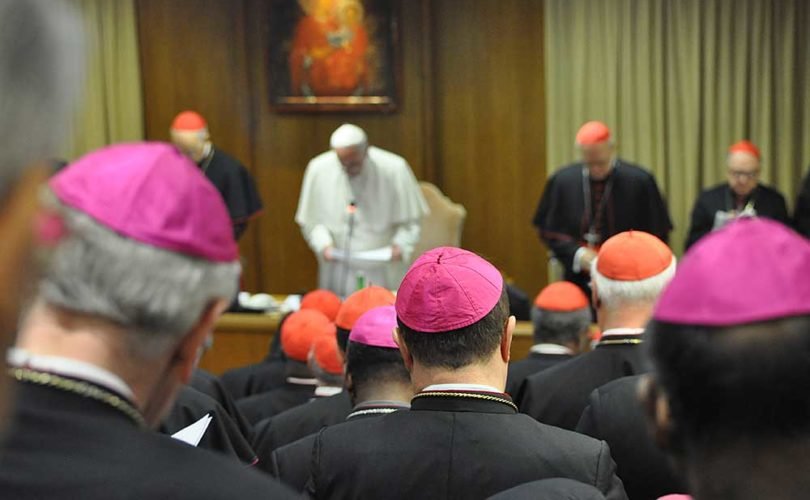 October 24, 2015 (LifeSite) –  The final Synod document has received generally strong approval (with the exception of certain paragraphs as noted below) and was passed by the Synod fathers. The Synod is finally over. However, as explained below, there are still reasons to be very concerned about the Synod outcome and that confusion will still reign about what the Church really teaches today on the issues discussed.

The lengthy document, which is currently available only in Italian, contains many surprisingly encouraging paragraphs reflecting the persistence of the orthodox prelates in the Synod discussions who were intensely prayed for and encouraged by faithful Catholics and supportive media. However, in addition to the paragraphs that barely received the required two-thirds majority vote, there are also legitimate fears about what was not stated in the final document.

Once again, the Internet age permitted LifeSite and many others to almost instantly convey to the world the attempts to weaken the Church's moral absolutes. The discussions therefore became accountable to all the faithful in the world and could no longer be ruled by the progressives' usual past hidden manipulations.

Those “progressives” were significantly trounced by the faithful bishops who fought attempts to lower the standards of Catholic teaching on marriage, homosexuality and morality in general.

Damian Thompson of the Catholic Herald wrote Saturday that,

I’m going to stick my neck out and say that conservatives basically ‘won’ this synod – they fought successfully behind the scenes and in the debates to block changes to pastoral practice that (a) they believe go against the teaching of the very anti-divorce Jesus of Nazareth and (b) would have outraged the increasingly powerful churches of Africa.

Gloria TV reports that according to Cardinal Pell,

…the Synod did not focus at all on the three topics Communion for the divorced and remarried, on the idea of conscience or on the acceptance of homosexuality: “Catholic doctrine is stated clearly.” Pell admits that the language is “different” and verbose. It is not a document that he would have written: “Some people will say it is terrible, but it is not terrible.”

“For him,” continues Gloria TV,

With that, the cardinal confirmed there was indeed a battle that could have been disastrous for the Church.

However, there are still ambiguities and items of serious concern in the document that the progressives insist “leave the doors open” to what they have been seeking. There is no doubt at all in my mind and many others, given past experience, they will exploite these openings to the maximum to change the Catholic Church.

Prominent Vatican blogger Sandro Magister, warns that, as happened with Vatican II, The Synod of the Media has Toppled the Real One. That is, the many heretical or near heretical proposals that were permitted to be stated, and which were accurately made public by the media (along with many inaccurate ones) during the Synod, have already had a major effect.

That effect, as Cardinal Napier bemoaned about the media-released, false mid-term report of last year's synod, cannot be undone. Napier stated then that, because of all the media exposure of that terrible document, the Synod fathers are now “working from a position that is virtually irredeemable.”

That is, no matter whatever good is in the current Synod's final document, the public mind has already been formed by what Pope Benedict would have called “the Synod of the media,” about things that were actually stated in and around the Synod, that the Church has changed its attitude and teaching on crucial moral issues. As a result, here and there all over the planet, those false understandings are forming the basis of decisions by uninformed Catholics and others.

Rorate Caeli has translated and listed the six most controversial passages or “time-bombs” that could be exploited to yet cause much grief to the faith and to family life. The Church progressives are hoping that Francis will prevail in the end and impose liberalizations that they, and some or possibly all of which also Francis, were determined to obtain from the Synod. There are other problems being discovered as well, as more English translated paragraphs become available.

Cardinal Burke says paragraphs 84-86 — which deals with baptized Catholics who are civilly divorced and remarried, is “of immediate concern, because of its lack of clarity in a fundamental matter of the faith: the indissolubility of the marriage bond which both reason and faith teach all men.”

Pope Francis is said to be clearly unhappy with the final result and the pushback that occurred during the Synod to the working document (Instrumentum Laboris), including the historically very significant critical letter from 13 cardinals. His closing speech contained harsh words for those who worked most diligently to defend the authentic, scripturally supported undertandings of Catholic teachings and pastoral application on the issues discussed in the synod.

Austen Ivereigh of the Washington Post summed up that the final result of the Synod “appears to open up space for conscience. Both sides can be happy.” That should be seen as very concerning.

The homosexual activist New Ways Ministry, which actually had one of its members accredited with a press pass by the Vatican, found the outcome of the Synod to be positive in its direction. It stated on its blog, “While the final report of the Vatican’s Synod on the Family has not said much in regard to LGBT issues, in fact, a great deal has changed in regard to the discussion on these topics at the highest levels of the Church.” They are looking forward to “a totally separate synod in the future on LGBT issues.”

At a press conference on the day the final report was approved, one of the leading progressives, Cardinal Marx, said: “I am very happy that we made a step ahead”… “There have been doors opened, especially for people in difficult situations,” and “I am very, very happy.” Also, on the same day, Cardinal Kasper stated, “I’m satisfied; the door has been opened to the possibility of the divorced and remarried being granted Communion.”

Much caution should therefore be exercised against excessive optimism over the final, greatly improved document. The battle is far from over.

As the progressive Vatican English-speaking press spokeman, Fr. Rosica, is quoted in the liberal Jesuit America magazine, “the Synod is a work in progress.” (See also Synod Day 2: Doctrine apparently ‘open question’, call for ‘end to exclusionary language’ for ‘gays’)

They haven't remotely given up.

See also:
The Synod’s final report is a victory for liberals on homosexuality – here’s why

94% of Synod Fathers voted to undermine parental rights at Synod

Pope must address Synod-created crisis of trust within Church

See all the LifeSiteNews reports on the Synod here.