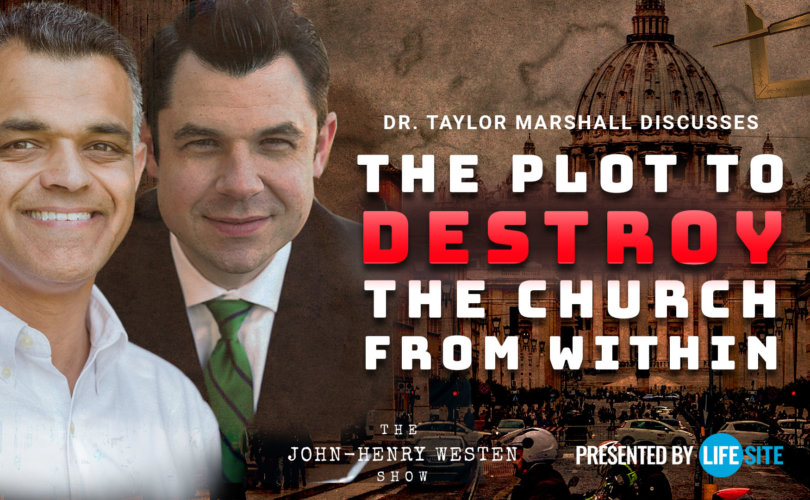 August 6, 2019 (LifeSiteNews) — Taylor Marshall is a bestselling Catholic writer and co-host of the hit podcast The Dr. Taylor Marshall Catholic Show. On this episode 20 of The John-Henry Westen Show, he talks with me about his new book Infiltration: The Plot to Destroy the Church from Within. Our fascinating discussion covers everything from his conversion to Catholicism, Freemasonry, and the Saint Gallen mafia.

Marshall told me that after studying the Catholic faith he became “drawn to the magisterium of the Church,” which he said was “a bedrock” he could rely on. He began writing Infiltration because the Catholic Church had never changed its teaching on marriage but that there “seems to be some changes going on in the Church” in recent decades. Marshall says he was shocked and wanted to research where the “confusions” today came from.

Marshall says the crisis doesn’t begin with Benedict’s resignation or with Paul VI or Vatican II. “It actually goes back a lot longer than just a few decades,” he said. It “really began in the 1830s, 1840s with an infiltration of humanist secular ideals of people conspiring…to attack the church from the inside.”

“What we’ve seen is an internal corruption, which ultimately will fail — by the grace of God, the Holy Spirt will overcome this,” he said.

Marshall points to the Permanent Instruction of the Alta Vendita as the starting point of the infiltration. The Alta Vendita is a document the Church acquired in the mid 1800s. It was credibly believed by several popes to have been written by the Italian Carbonari, or Italian Freemasons. The document, Marshall says, lays out a 100-year-plus plan for corrupting Catholic clergy with humanist secular ideals. Its  ultimate goal is to elect a pope who, believing he is promoting Catholicism, is actually advancing the principles of Freemasonry. Marshall believes Pope Francis seems to be that pontiff.

Infiltration is a sort of history book that covers the papacy of Pius IX, Leo XIII, Our Lady of La Salette, St. Pius X, all the way up to Vatican II in an effort to lay out the crisis in the Church. The internal corruption in the Church, Marshall said, is in its “philosophy, theology, morals, and liturgy.”

Today, Freemasons are seen as “a joke,” Marshall told me. But in reality their ideas have “permeated society.” Aleister Crowley turned Masonry into a religion when he created the Gnostic Catholic Church, which was founded on sex magic and the occult. He established his “church” in St. Gallen, Switzerland. And yet, Marshall says, St. Gallen is where Theodore McCarrick “found” out he had a vocation. It is also where the liberal St. Gallen Mafia secretly met to discuss electing Jorge Bergoglio as the next pope. He “was their number one candidate,” Marshall told me.

Marshall says lay Catholics are the foot soldiers in the battle to preserve the faith. The laity must understand the “deep, deep, problems in the Church” but must “rebuild the Church, and rebuilding the Church means returning to the traditional norms of Catholicism — going to confession every two weeks…rediscovering the traditional forms of the liturgy…the novenas, the fast days.” Catholics must rediscover “what it means to be a Catholic.” “Our Lady will lead us,” he confidently told me.