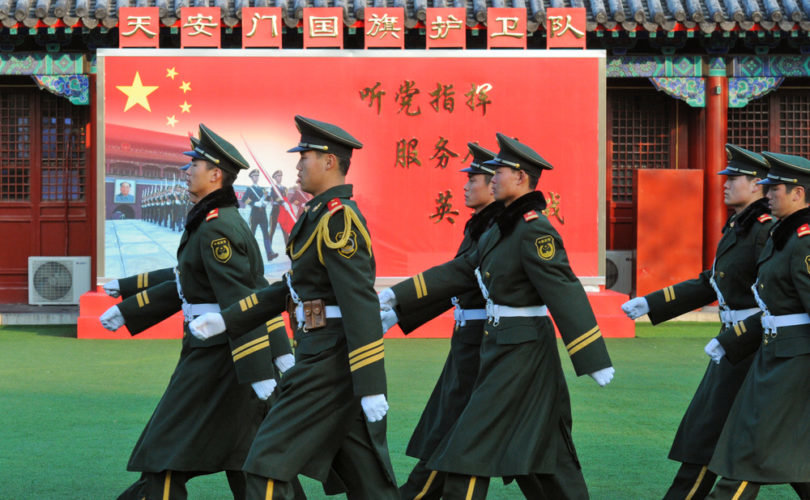 May 23, 2019 (LifeSiteNews) — The evidence continues to pour in that China is waging war not just on Catholicism, but on all religions.

In its 20th Annual Report on International Religious Freedom, the U.S. Commission on International Religious Freedom (USCIRF) devoted an entire section to China. Not only did the bipartisan, independent federal government commission designate China as a “Tier 1” country — a category reserved for the worst offenders of religious freedom — it went farther. It accused China of being “in a category all by itself” in terms of both the scope and the severity of its attacks on religious believers.

China’s war on religion began twenty years ago with the targeting of Falun Gong Buddhists. Of late, it has spread to encompass all religions, including China’s own home-grown folk religion of Taoism.

The state seems to see Catholics and other Christians as a particular threat, perhaps because their numbers have been growing so fast. China’s Christians may now outnumber the 94-million-member Chinese Communist Party, so it is no surprise that party leader Xi Jinping sees them as a threat to his continued rule.

In all, up to 3 million people in China may currently be in detention camps solely because of their faith, mostly Christians, Buddhists, and Uighur Muslims.

In light of this persecution, the Commission has recommended that the Chinese officials in charge be sanctioned. As they write in the report, released on April 30:

The U.S. government — and the international community — must swiftly and resolutely sanction Chinese officials and agencies that have perpetrated or tolerated severe religious freedom violations, including Chen Quanguo, Communist Party Secretary in the Xinjiang Uighur Autonomous Region and other Politburo Members.

Of course, the person most responsible for the current wave of persecution is Communist Party general secretary Xi Jinping himself, whose determination to stamp out all religious sentiment in China rivals the late Chairman Mao’s purges of the fifties and sixties.

In fact, Xi Jinping and other Chinese communist leaders have consciously rejected all of the building blocks of Western civilization: democracy, the rule of law, civil society, a free press, human rights, and the free market. All of these are, in the words of Central Committee Directive No. 9 of 2013, “threats to the continued rule of the Party.”

Most critically, they have rejected the transcendent capstone of Christianity, which binds the whole of Western civilization together. They understand that China’s conversion to Christianity would mark the end of their brutal system of rule.

This is why the persecution of the Church in China will only intensify.

No Sino-Vatican deal would have been a better deal

The U.S. Commission’s report takes particular aim at the secret deal that the Vatican entered into last year with the Chinese Communist Party. As the report notes:

In September, the Vatican reached a provisional agreement with China that would allow the government a role in the appointment of new bishops; nevertheless, repression of the underground Catholic Church increased during the latter half of the year.

This outcome should have come as no surprise to the Vatican — especially in view of the fact that the Chinese Communist Party’s United Front Department had ominously assumed direct control of religious affairs in March 2018, six months before the Sino-Vatican agreement was signed.

As I warned Cardinal Parolin at the time, while the Vatican had earlier been negotiating with government officials, from now on, Vatican officials would be dealing directly with atheistic Communist Party officials, who were determined to stamp out Catholicism as a “foreign religion.” Any deal with United Front officials would not only offer no protection to Catholics in China, but in fact, result in increased persecution of the Catholic Church.

The Vatican was warned by others as well, including retired Hong Kong cardinal Joseph Zen. The proposed deal with the Chinese communists, the cardinal had earlier warned, would turn out badly for the underground Chinese Catholic Church. Zen later described the actual agreement as a “complete surrender” and “an incredible betrayal” of Chinese Catholics.

That, sadly, is exactly what has transpired. In fact, China seems to be using the “cover” of the Sino-Vatican agreement to ramp up persecution of not only Catholics, but Protestants and members of other religions as well. As the Commission’s report notes:

The government also raided or closed down hundreds of Protestant house churches, including Zion Church, Rongguili Church, and Early Rain Covenant Church. Meanwhile, more than 900 Falun Gong practitioners were arrested during the year simply for practicing their beliefs or distributing literature about the Falun Gong.

One of the most poignant sections of the report was an addendum by Commissioner Johnnie Moore, who criticized the Sino-Vatican agreement in harsh terms (emphases added):

My personal opinion is that one of the most alarming incidents as it relates to religious freedom in the entire year was the decision by the Vatican to negotiate a diplomatic relationship with China that resulted in the recognition of government appointed bishops and which also — in effect deposed prominent Chinese religious leaders who had persevered through horrific persecution in previous generations in China, including China’s most well-known Catholic leader. …

Literally, within days of the Vatican negotiating its deal, the Chinese used it as cover to embark upon the closure of several of the nation’s largest and most prominent unregistered church communities. That has continued. Being that the Vatican is both a Church and a State, it is my opinion that the Vatican now bears a significant moral and legal responsibility to help solve the problem which it helped create — albeit inadvertently — by providing China license to viciously crack down on Christian communities (as cited in this report), and by providing the Chinese government further cover to continue its incomprehensible, inexcusable and inhumane abuses of Muslim citizens in the western part of the country.

While I am entirely for direct engagement on these issues, including with the most severe violators in the world, that engagement must not result in these types of unintended consequences, as has been the case in China. The Vatican made a terrible mistake, which it must take seriously. This debacle must be dealt with urgently and seriously.

The Vatican has to date greeted the U.S. Commission’s report with silence.

What should the Vatican do?

Elizabeth Yore, who is an advisory board member of Save the Persecuted Christians, has called for the Vatican to withdraw from the deal: “It is urgent that Catholics around the world, freedom-loving countries, and the United Nations condemn Pope Francis for his foolhardy and horrific deal and demand that the Vatican immediately and entirely withdraw from this agreement that provided China cover to violently crack down on Christians. Nothing less will do. Contrary to the Vatican’s advice, patience is disastrous. It’s not merciful. The Pope of Mercy should understand.”

Yore is absolutely correct. In my view, this current wave of persecution is just the beginning. Communist leader Xi Jinping, like Chairman Mao Zedong before him, seems determined to extinguish all religious faith within his country, replacing it with “faith” in the Chinese Communist Party and its leader, who happens to be Xi himself.

By signing an agreement with the CCP, the Vatican has made itself complicit in this religious purge.

Short of withdrawing from the agreement, the Vatican’s chief negotiator, Cardinal Parolin, should at least take it upon himself to make the entire agreement public, as well as criticize the way it is being “enforced.” By making the terms of the agreement public, he will make it clear to members of the underground Catholic Church that it does not call for their forcible induction into the schismatic Catholic Patriotic Association — as Chinese officials are claiming. And by publicly shaming party leaders in this way, he may win a respite for not only Catholics, but all believers in China.

Finally, the Vatican should come to the supernatural aid of Chinese Catholics by calling for the universal Church to unite itself in prayer for the suffering Church in China, and by consecrating China to the Immaculate Heart.

This is particularly urgent because so much of that suffering is a wound inflicted on the Chinese faithful by the Vatican itself. It is hard not to conclude that those who hold the highest ranks in the Church have, in a failed reprise of diplomatic “Ostpolitik,” sacrificed those who occupy the lowest and most vulnerable positions.

In equally troubled times, Saint Pope John Paul II consecrated the world, including Russia, to the Immaculate Heart of Mary on March 25, 1984. The Soviet Union fell seven years later. I would note that Cardinal Paul Josef Cordes, former president of the Pontifical Council Cor Unum, recalled talking to Pope John Paul II after the consecration, or “entrustment.” Cordes learned that the Pope had “held back to mention Russia explicitly, because the Vatican diplomats had urgently asked him not to mention this country because otherwise political conflicts might perhaps arise.”

At a recent Wednesday’s audience, Pope Francis made a start. Following a tradition begun by Pope Benedict in 2007, he asked for the intercession of Our Lady, Help of Christians, for suffering believers in China.

Perhaps it is time for the Holy Father to entrust all of China to the Virgin Mary, as Queen of Peace, through her Immaculate Heart.

Undoubtedly, Vatican diplomats will urgently ask him not to do this because it might lead to the end of the Sino-Vatican agreement.

That, of course, might be the best possible outcome.

In the meantime, let’s us all pray for our suffering co-religionists in China.

Steven W. Mosher is the President of the Population Research Institute and the author of Bully of Asia: Why China’s “Dream” is the New Threat to World Order.