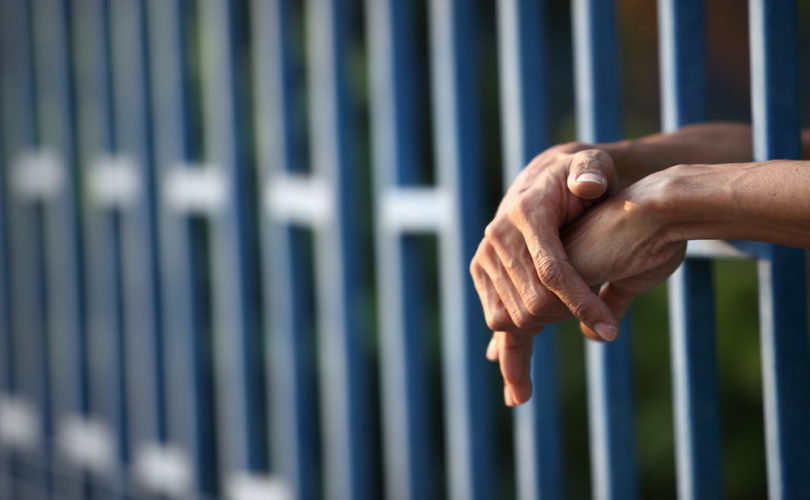 (LifeSiteNews) — Some of you may remember a story from 2018, when a man named Stephen Wood identifying as female “Karen White” managed to get himself sent to a women’s prison in the United Kingdom. Upon his arrival there, he promptly began a spree of sexual assaults, the first of which he perpetrated within days. He sexually assaulted four female inmates before prison officials decided it was time to transfer him, after which he began begging friends to help him fund a sex change for 25,000 pounds so he could get transferred back. He wrote that he wanted to “force” the system to send him to a female prison.

White, it must be noted, was sent to jail for attacking a 66-year-old neighbor with a steak knife, raping several women, and sexual offenses involving children. None of that was enough to keep him from getting locked up with women who had no choice but to spend time behind bars with him. Their only reprieve was the fact that he was put in a private cell and made to shower separately. For three months, White essentially had free reign to perpetrate new crimes.

Now, a female prisoner has finally come forward to describe what it was like for women to be locked up with White in an interview with The Mail on Sunday. Forty-five-year-old Cheryle, one of the 360 inmates of HMP New Hall, was one of White’s four victims, and she says that White simply pretended to identify as female in order to take advantage of new pro-transgender laws that allowed violent male criminals to get sent to women’s jails merely on their say-so. Under these laws, White’s original name could not be revealed, and his violent crimes were not considered.

“This must never be allowed to happen again,” Cheryle told the Mail, who said she was speaking out in hopes that other women would not suffer what she endured. “Whatever people have done, prison should be a safe space.”

White, in fact, was even permitted things other inmates weren’t. “She would get special privileges to buy makeup on certain sites like Asos and she was allowed to use the internet to buy her wigs. We were never allowed to do that, so why was she? She would always come in with full makeup but couldn’t do her foundation properly. We were all a little shocked about how big she was. I gave her vape oil and we had a five-minute chat about what she was in for. She didn’t want to fit in, it was just a costume, an act. Her voice was really, really deep and blokey. If you wanted to be a woman you would try to make your voice softer, but she didn’t care.”

It is interesting to note that even in her account of sexual assault by a 6-foot-tall, sinister-looking man—whose blond wig did nothing to disguise his gender — Cheryle still used female pronouns to describe him. Cheryle is willing to note that White’s guise was just a “costume” and that it was “just an act,” but for the purposes of a media interview, still played along with the premises that had put White in prison with her in the first place. She was there for burglary after a drug addiction spiraled out of control — he was there because he was a dangerous, violent sex criminal.

She met White in September 2017, and within days he aggressively demanded a sex act from her when they were alone in a workshop. “I thought you were a woman,” Cheryle protested. “Yes, but I still have a penis,” White responded, and told her that if he didn’t take his hormone tablets, it would still “work,” and that he would often only pretend to take the tablets. He then violently groped her. There was nothing she could do.

Several weeks later, White cornered her again while she was waiting for the bathroom, pressing himself against her — and shortly thereafter, Cheryle found out that he had already tried to force himself on another inmate whom he would have raped if someone had not come in and pulled him off. She made a formal complaint and discovered that she was only one of several of White’s would-be victims. At this point, White was transferred to a male prison in Leeds. Many of the female inmates had not even known that White was male. They were livid when they found out.

“We felt they had protected Karen over us,” Cheryle told the Mail. “All women in prison are vulnerable. All her conversations were about sex. I felt vulnerable and uncomfortable in her presence. And we all felt like that, even the toughest of us. She had a manly body. It’s just human nature that men are stronger than us. And we all knew Karen was stronger than us. If she got hold of us, she would overpower us.” She says the prisoners even had a ditty they’d repeat: “Watch out for White, she’ll give you a fright.”

Cheryle summed up their situation bluntly: “Karen White faked being transgender to abuse women and the authorities enabled her to assault ad prey on us … [The prison officials] don’t care about the victims. Shouldn’t they be the ones that have the say of what their attacker is called? If the person is able to penetrate you, then they are a man.”

And yet — yet  — Cheryle still uses female pronouns for her male assailant, highlighting again the power the transgender movement wields over the very language we use, distorting the truth of every situation.

“Karen White” is now serving a life sentence in Wakefield, a male prison that hosts 750 of Great Britain’s most dangerous criminals. He was given the ability to sexually assault more women by a system thoroughly corrupted by the premises of transgender activists who care more about society supporting their delusions than the danger their policies pose to women. If rapist Stephen Wood says he is Karen White, he can be locked up with his prey — this, we are supposed to believe, is the tolerant and accepting thing to do.

I’m grateful that women like Cheryle are finally speaking up. As more voices join hers, perhaps the transgender movement will finally face the #MeToo moment they deserve.