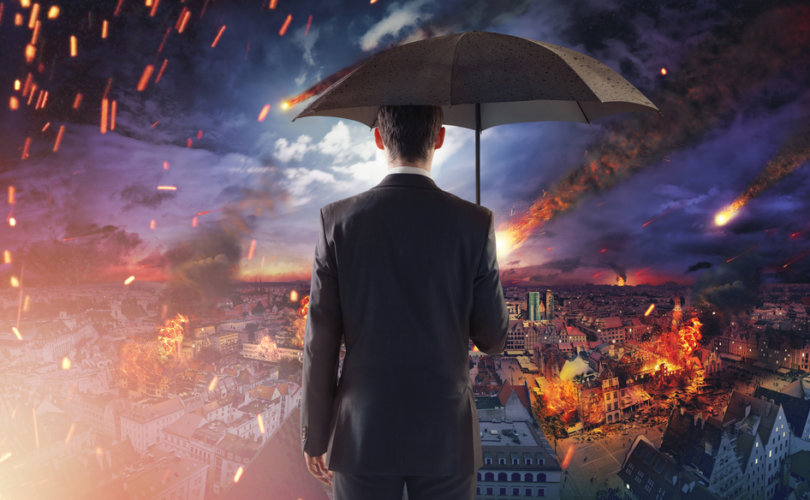 June 22, 2016 (LifeSiteNews) – It was a beautiful summer evening, with an occasional gentle breeze preventing it from becoming stifling. I was sitting on a restaurant patio with my wife, sipping ice-cold water and chatting about the week’s events while waiting for our food to arrive. Cheery chatter rose from the tables around us. The events we were discussing seemed almost weird and unreal in contrast with the pleasant Saturday evenings unfolding for the restaurant’s patrons. Everything seemed so normal.

A group of women brayed noisily one table over, loud cackles chasing each other out into the summer air. One of their group rose to her feet on ridiculous heels and teetered off like a new-born gazelle taking her first steps. To our left, a middle-aged man with a huge bushy moustache gripped an enormous burger with both hands, eyeing it like a saber-tooth tiger deliberating where to lunge at a mammoth. The others at his table weren’t talking much, just smiling into their sweating, frothing beer glasses and percolating peacefully.

All was calm, and all was right.

The normalcy seemed strange, because at our table we were discussing recent cultural developments—Christians being slowly forced to the margins of society, the increasing threat of government intrusion into Christian education, new strategies to combat abortion ideology, and how the country we hoped to raise children in one day was already so much different than the one our parents had raised us in. On the surface, though, everything seemed lovely, and pleasant, and thoroughly unalarming.

While everything seems normal, everything is changing. The ground is shifting beneath our feet as the Judeo-Christian foundations of our society are removed, brick by brick. We need to notice these things. And we need to prepare for them.

No wonder that people who are not watching carefully treat those of us raising the alarm as if we’re crazy, I thought, or maybe just victims of the newest viral conspiracy-theory YouTube video.

Talk of “persecution” of Christians in the West sounds a bit ridiculous, especially with crucifixion coming back into style in the Middle East, North Koreans being publicly executed for owning Bibles, and Communist China mulling another crackdown on Christian churches. In contrast to that, Western Christians are, for the most part, still part of one of the richest generations in one of the wealthiest civilizations in all of human history.

And yet, the Judeo-Christian foundations of the West that brought such success and such prosperity have either been removed or are in the final stages of demolition. The sanctity of life is gone, but most of us have not noticed simply because we do not toss the corpses of the murdered out the front door into the street, but quietly deposit them in dumpsters behind clinics or vaporize them in modern, up-to-date incinerators. New ideologies have taken over our legal systems, and the short march to labelling Holy Scripture as Hate Speech has already begun. The number of citizens who still attend church or are even aware that Christianity was the life-blood of our civilization is plummeting.

Things may be peaceful for the moment, but the dark clouds in the distance bulge with thunder and the rumblings have already begun: Christian universities are told they are ineligible to start a law school because they believe what Christians have always believed, Christian medical professionals are told they will be forced to refer patients for killing, and Christian professionals are subjected to “formal investigations” at the slightest hint that they have violated the new secular religion. This is just the calm before the storm, but because Christians are so distracted with the high drama of ordinary day-to-day life, they may not hear the rumblings until thunder splits the sky.

These rumblings are there for those who listen enough to hear them, and they are unfolding as we go about our day, stress about our finances, pick up children from school, and go out for pleasant dinner dates. Our reality is changing.

An Edmonton Catholic school teacher was suspended for teaching Christian beliefs in a religion class last week after being accused of “anti-gay” comments by a lesbian couple.

A Manitoba school district has also been targeted by a lesbian couple, who are demanding that the children of other people be taught that their family arrangement is normal. They have retained a lawyer, and are bringing the district to a Human Rights Tribunal.

A bloody killing spree at a gay nightclub in Orlando brought a widespread condemnation of Christians, with many accusing Christians who oppose same-sex marriage of creating the “anti-queer climate” that spawned the Islamic terrorist. One Christian commentator compared the backlash against Christians to the 1933 Reichstag Fire.

Day after day, week after week, month after month, pre-born children in the womb are suctioned into bloody slurry and quietly disposed of, while our leaders declare this barbarism to be a good and noble right.

The Canadian Parliament passed a law formally codifying the conditions under which some born Canadians can kill other born Canadians, with euthanasia now becoming the official law of the land.

These sobering facts, amid a host of others, show us that while everything seems normal, everything is changing. The ground is shifting beneath our feet as the Judeo-Christian foundations of our society are removed, brick by brick. We need to notice these things. And we need to prepare for them.

I write this because I catch myself shaking my head sometimes, at the difference between what I see happening in the culture and the many blessings I am privileged to receive from day to day. While it’s true that I’ve seen the bloody results of abortion up close and personal, and while it’s true that my job takes me into the heart of these existential debates, at the end of the day I can still go home to a lovely house, eat a delicious dinner, and quietly read books on a sunny porch. I have to remind myself that beneath the surface of society, things are changing that could very well impact all of this, and that it is our duty to do what we can while we can to reverse these trends.

Later on that evening, I sat on my front steps thinking these things over, wondering what we could do in the face of changes that seem so overwhelming. There’s a Chinese proverb that’s considered both a blessing and a curse all in one, and it came to mind just then: “May you live in interesting times.” To my left, the traffic light made the asphalt glow blood-red, giving the quiet street an eerie feel. After awhile, the light changed and the road gleamed green. I smiled to myself, and thought of the lines from a Dylan Thomas poem that has reminded me often of the euthanasia debate:

Do not go gentle into that good night…Rage, rage against the dying of the light.