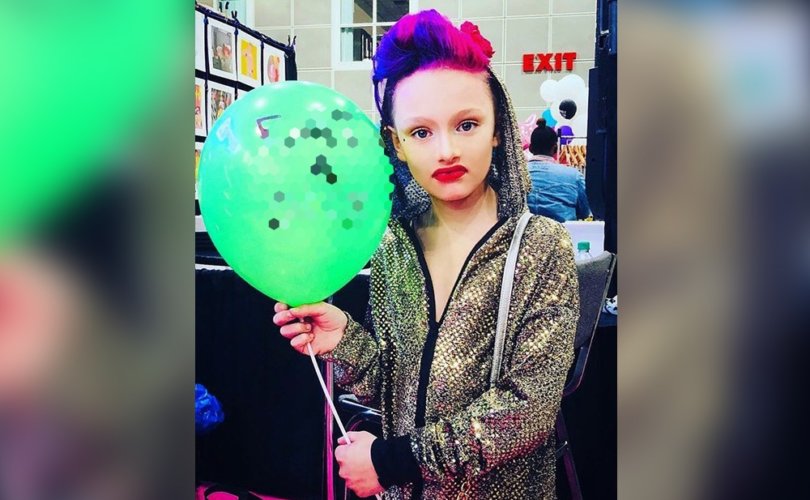 May 24, 2018 (LifeSiteNews) – Just when you thought this heartbreaking story couldn’t be any more sickening, along comes a new level of disgust.

On May 15, Brandon Hilton shared a new photo of nine-year-old Nemis Quinn Mélançon Golden, who goes by “Lactatia” in his “career” as one of the world’s youngest drag queens. It was apparently taken at RuPaul’s recent drag convention.

Hilton says that Lactatia, “wearing her infamous sequin onesie,” has a “message for her haters”: a balloon with the words “suck a d***” written on it. The tweet and image can be viewed by clicking here.

Nemis, you may recall, is the little boy from Montreal whose own mother, Jessica Mélançon, actively encourages her son’s career in female impersonation, which started at age seven.

The “Lactatia” persona is just that, and Nemis doesn’t identify as transgender – yet – but we shouldn’t be surprised if the “gender nonconformity” continues to accumulate as he grows older.

Serious authorities already tell us that reinforcing gender confusion is one of the worst things a parent can do for their child’s long-term health, but in this case the harm goes dramatically further. Not only does the degree of the mother’s support raise uncomfortable questions about whether Nemis chose to enter this life in the first place, but the girl he’s pretending to be is anything but wholesome.

The child’s drag apparel consists of distinctly adult makeup, wigs, and dresses, and he appears to have become fully immersed in the trappings of the profession, from suggestive dancing to participating in vulgar drag shows. Indeed, he’s a cover model for a fetish apparel line, and even his stage name is a not-so-subtle reference to a bodily function.

And now, the poor kid is sending belligerent sexual insults – or, just as likely, being posed beside messages actually authored by his mother or some other adult opportunist. On top of the gender confusion and hyper-sexuality dominating Nemis’ short, impressionable, prepubescent life, he’s being put on the front lines of a cultural debate he’s too young to comprehend, and being taught that criticism of how he’s been abused is “hatred” of him personally.

Yet the LGBT activist world – you know, the people who swear up-and-down that their communities are every bit as wholesome, responsible, and fit to raise children as everyone else, with some swapped body parts being the sole difference – thinks this is absolutely wonderful.

And the worst part? He’s not the only one. Brooklyn’s Desmond Napoles, or “Desmond is Amazing,” is just one year older, yet is being similarly exploited by the LGBT crowd through sexualized drag performances. Desmond also claims to be gay (though it’s unclear whether he knows what that means), and that he wants to start an online club for “drag kids” everywhere.

The fact that there’s an entire media branch and cottage industry that eats this stuff up might spare these kids the career struggles these habits would guarantee them in the real world, but the conditioning still forms a ticking time bomb that will eventually detonate all over their future relationships, mental health, and personal happiness.

May God help these children through the suffering in store for them, and may God have mercy on the societies around them for letting their abuse go so far.