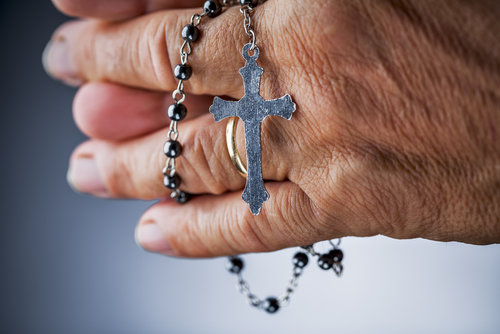 In a piece published by The Atlantic on August 12 titled “The Right’s New Bogeyman,” the popular magazine attempts to downplay the often-violent pro-abortion group called Jane’s Revenge by casting doubt on whether the group is “for real,” and questioning if the radical collective is actually behind the recorded acts of violence and vandalism they have taken credit for.

Just two days later, on August 14, The Atlantic published another piece titled “How Extremist Gun Culture Co-Opted the Rosary,” which seeks to argue that a number of “armed radical traditionalists have taken up a spiritual notion that the rosary can be a weapon in the fight against evil and turned it into something dangerously literal.”

It is also worth noting that while the current title of the piece is fairly nuanced, the article’s headline was changed on multiple occasions, previously reading, “Guns and Rosaries” and “How the Rosary Became an Extremist Symbol.”

Nevertheless, one cannot help but notice the stark contrast between The Atlantic’s coverage of the admittedly violent Jane’s Revenge and the coverage of mostly American traditional Catholics who view the Rosary as a weapon while also supporting their Second Amendment right.

Jane’s Revenge, which has taken credit for firebombing a pro-life medical office in Buffalo, New York, along with other acts of destruction in “16 cities throughout the U.S,” is referred to as “mysterious” in The Atlantic, and despite the real-world acts of violence and vandalism, the piece says this “does not imply the existence of a complex, coordinated campaign of violence.”

However, when looking at those who create and disseminate “images of rosaries draped over firearms, warriors in prayer … crusader memes, and exhortations for men to rise up and become Church Militants,” well that group is one of the “constellations of violent, racist, and homophobic online milieus” that are known for “providing a pathway to radicalization and real-world terrorist attacks.”

To recap, when referring to people who have proudly taken credit for acts of extreme violence in the name of a political cause, namely the so-called right to murder unborn children, which is definitionally terrorism, the preferred adjective is “mysterious.”

When referring to people who reject the “Second Vatican Council’s reforms,” and make memes depicting their devotion to the Holy Rosary with the theologically valid understanding that the Rosary is a tool of defense in the war against evil, the preferred adjective is “dangerous.”

The piece does mention that it is “not an intrinsically harmful interpretation” to view the Rosary as a “weapon,” without explaining that the Rosary became the prolific sacramental it is today precisely because of its use in war!

Namely, the Battle of Lepanto in 1571, in which “Christian sailors joined [Saint] Pope Pius V (a Dominican) in praying the Most Holy Rosary, and defeated a much larger Turkish force.”

In fact, the Rosary as a weapon is so integral to the Catholic faith, that the Feast Day of the Holy Rosary is October 7, the anniversary of the Battle of Lepanto.

The piece also fails to explain the reality of what it means to use the Rosary as a weapon, and instead implies that the understanding that it is a weapon against evil allows “radical-traditional Catholics literally to demonize their political opponents,” thereby allowing them to view “armed force against them [their opponents] as sanctified.”

Beyond an absurd claim, anyone who even moderately adheres to the Catholic faith is aware that one cannot physically harm those opposed to them politically.

In the traditional recitation of the Rosary, one prays 153 Hail Marys. That is to say, on 153 occasions the person asks for the Blessed Mother to “Pray for us sinners.” Not, “Pray for these sinners” or “Pray for those sinners,” but “us.”

When a Catholic prays the Rosary for the purpose of putting an end to the evil of abortion or any other ill condemned by Holy Mother Church, the Catholic is not asking God to kill or harm those who oppose Christ and His Church, but to have them convert and embrace His love!

The Rosary is a weapon, but it does not have the goal of death. On the contrary, the Rosary is a weapon that seeks to inflict eternal life on those it is directed toward. Not to condemn, but to transmit the salvific grace implicitly desired in all mankind.

As Our Lady told the children of Fatima to pray:

O my Jesus, forgive us our sins, save us from the fires of hell, lead all souls to Heaven, especially those most in need of Thy mercy. Amen.