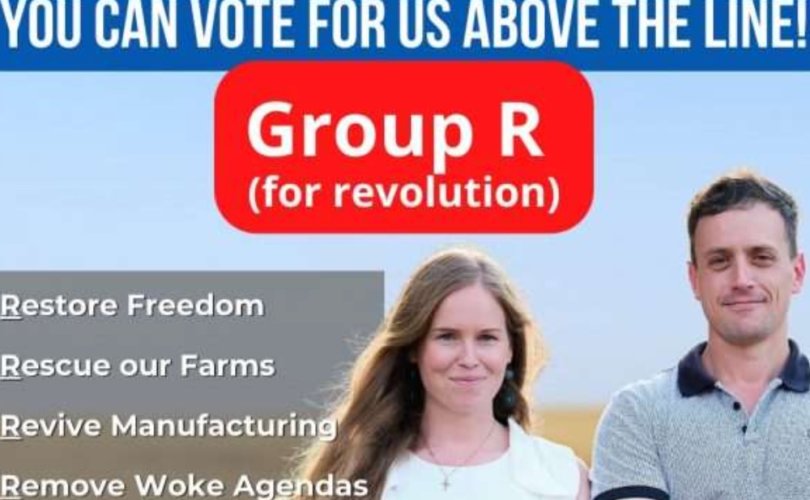 CANBERRA (LifeSiteNews) – The Australian Electoral Commission (AEC) has sabotaged independent upper house (i.e., Senate) candidates around the country in our recent federal election. It is a national scandal unsurprisingly getting no attention from politicians or the mainstream media, yet it represents the biggest failure by election administrators in the nation’s history.

For those of you reading from outside Australia, I’ll give you a quick explanation of our federal parliament structure and election process.

Our elections are very different to the ones in USA. Our federal parliament is made of 151 lower house (i.e., House of Representatives) seats and 76 upper house seats. The lower house introduces and votes on bills, whereas the upper house votes to approve, amend, or block the bills handed up by the lower house. When we have a federal election, we must vote on two separate pieces of paper, one for each house.

The lower house ballot looks like this. We must number every single box with 1 being our favorite. Lower house members represent a specific region within their state. Notice that the independents get the word ‘independent’ under their name.

The upper house ballot looks like this. We must number either 1-6 above the line OR 1-12 below the line. Above the line we can vote for a party or independent group of candidates. Below the line is where we can vote for specific people regardless of the party or group they belong to. Upper house members represent the whole state. Notice column ‘G’ has no logo or name, you’ll understand the relevance of this soon.

Now that the brief explanation is out of the way, let’s get into the scandal. The issue was with the upper house voting, the one pictured directly above.

Most voters prefer to number the boxes above the line because it is less tedious, only 1-6 instead of 1-12. To get listed above the line you either need to be a member of a party or get at least 100 signatures from the public to prove you have sufficient support to be placed above the line.

Morgan Jonas and I got the signatures we needed and were listed above the line in the column ‘R’.

This is what our real senate ballot paper looked like. This is an example of the correct way to vote for us, in column R, above the line.

As independents, we don’t get a fancy logo, our names or even the word ‘independent’ written in our column. Remember, in the lower house, the candidates get their name and the word ‘independent’ so voters know exactly who they are. Anyone looking for us, who had not been informed properly, would be confused by this. Our individual names are listed below the line in the same column, but unfortunately Australians have been purposefully uneducated how to vote correctly. Most students finish school having no idea about our voting system whatsoever.

We were aware of this before we applied. We worked very hard to educate our supporters exactly how to vote for us and to expect the empty column. It’s clear that the Australian system is set up to make it nearly impossible for independents to get into the senate.

However, it gets a lot worse. When confused voters rang up the AEC, or asked them in person at the voting centres, they were actively discouraged from voting in the empty columns. We have recordings of the conversations:

They were told that the party had withdrawn or that it was a mistake. It was suggested that if voters numbered those boxes without names, their vote would be invalid. The AEC literally told our potential voters to not vote for us! This leads us to another question: if the AEC staff didn’t know that a vote for us above the line was valid, were our valid votes discarded during the count as well? Unfortunately, it seems only logical we lost votes before and after the count.

It is not clear if these AEC workers were just confused or under instructions to give false advice. Either way, the election should be re-done based on all the evidence we have. Elections are meant to be fair for all who qualify to run. Does this sound fair to you?

After the above video was released, the AEC sent out a memo to all their phone staff informing them that a vote for an empty box above the line was absolutely valid. We have no proof they informed the staff at the voting booths. Even if they did re-train all their staff correctly at this point, there had already been 1.5 weeks of pre-voting and it was only 2 days before election day. The damage was done. Even after the memo was sent out, we continued to call them to see what they would say, and staff continued to give false advice. Even on election day, dozens of people video-recorded the staff at the polling booths saying similar things and advising people to not vote for us above the line, and that it wouldn’t be valid.

Even I asked at the voting centre when I went to vote, and they gave me the wrong answer! I called over the supervisor and informed him that his staff just advised me that I couldn’t vote for MYSELF. He was embarrassed, but it didn’t matter; his staff had been giving wrong information for weeks.

Unsurprisingly, the candidates-with-no-names did poorly. Morgan and I did the best out of all the independent candidates in Australia, but we didn’t get close to winning a seat. There are a group of people compiling all this evidence to take this matter further, but the damage has been done. The AEC, which previously enjoyed an excellent reputation, now has a massive stain on its record.

This is a crime, either deliberate or through incompetence. It is instructive to compare it with other kinds of electoral crimes. There is interfering with political liberty (Section 327), which makes it an offence to hinder or interfere with the free exercise of performance by any person of a political right or duty that is relevant to an election. The maximum penalty for this offence is imprisonment for six months. There is “misleading or deceptive publications” (Section 329) which makes it an offence to print, publish or distribute anything that is likely to mislead or deceive electors in relation to the casting of votes. This offence attracts a maximum penalty of imprisonment for six months.

Clearly what the AEC officials did was hinder the “free exercise of performance” because voters were deprived of the right to know who they were voting for. The AEC and AEC officials misled or deceived voters when suggesting they avoid voting for the independent candidates.

Will AEC officials get six months in jail? It doesn’t matter whether they did it on purpose or not because ignorance is no defence. Will the AEC take responsibility, or even apologise for this outrage? Most likely, in the spirit of government in Australia now, they will just come up with excuses and blame the victims.

The courts will no doubt do nothing. We no longer have a legal system worthy of the name.

In this tyrannical Australia, governments target citizens, not serve them. It is yet another reason why we need to fight to reignite democracy in this country.