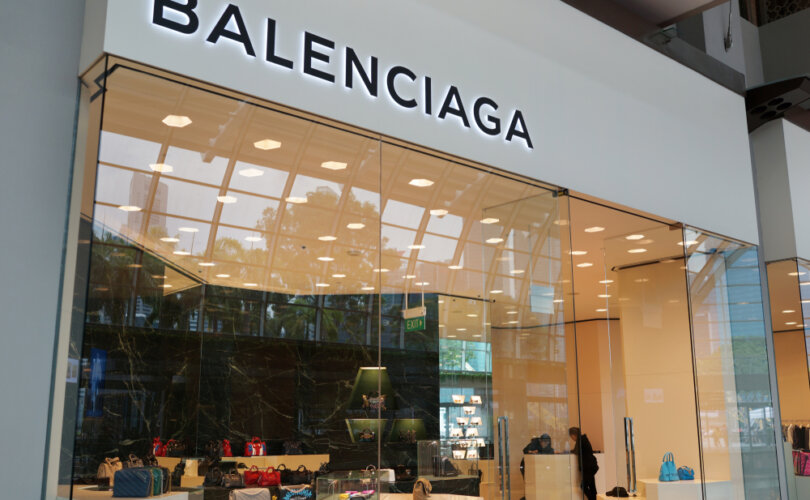 This guy had the guts to speak from the heart about Balenciaga while his gutless co-hosts quaked in fear of having an Unapproved Opinion.

He ripped out his earpiece because he was being told to stop and he didn’t care.

Schroeder is right in more ways than one. It is true that the mainstream media has published stories on this issue, it is true that most of the columnists and TV hosts said the right thing, but it is also true that considering the sheer hideousness of the ad – which included a print copy of a Supreme Court decision on child pornography – the outrage was severely muted.

Over at The View, the hosts condemned the ad as merely “distasteful” and “ugly,” with one of them complaining that the ad was “badly timed” because it “played right into the hands” of those of us who also condemn drag shows for kids, and it was “a dangerous time to give credence to those kind of insane takes.” In other words, this ad was bad because it was bad for the pro-LGBT community and seemed to prove the point of those condemning the sexualization of children.

The mainstream media insists that conservatives condemning the sexualization of children is a nonsense moral panic – that none of this is as bad as all that. Of course, most outlets have to say that, because they’ve leveraged much of their credibility into defending drag shows for kids, child drag queens, explicit how-to sex education for kids, transitioning children, and vile entertainment. Thus, it is difficult for them to express the appropriate moral outrage demanded by Balenciaga’s vile ads because a) many of them don’t feel any outrage to begin with and b) many of them probably recognize the hypocrisy in condemning Balenciaga while defending pornographic books written just for kids.

Thus far, the main response I’ve seen from the media on growing sexualization of children is to insist that it is all a Pizza Gate-style conspiracy theory that is pushed by cynical, bad faith actors and believed by stupid rubes. Thus, it is left to alternative media to actually hunt down and publish stories on what is actually happening.

Such as the fact, for example, that “child sex mannequins” were recently sold at an auction house owned by the head of Balenciaga’s parent company (click on that link at your own risk – the images, even though they’re blurred, are very disturbing). Or The Washington Post publishing a glowing review of a play sympathetic to pedophiles – it follows the stories of a statutory rapist, two men who abused boys, and a man who molested his daughter – calling it “brilliant” and “scintillating.”

Or what about the story of a serial pedophile with an estimated 1,000 sex crimes against children to his name having his community sentence relaxed by a justice of the Supreme Court of Western Australia after “transitioning” to female – and being told to “self-manage [his] risk of offending”? Or the Child Court judge who sponsored Drag Queen Story Hour getting arrested for the possession of child porn? Or the registered child sex offender reading to children for Drag Queen Story Hour at the Houston Public Library? Or the sponsor of Drag Queen Story Hour in Milwaukee arrested on child pornography charges? Or the one in Pennsylvania? And on it goes.

The stories, it seems, are endless.

As I said in a recent column on the Balenciaga affair, the ad campaign was a trial balloon, testing how far our culture can be pushed on the sexualization of children. We have already come horrifyingly far in a very short amount of time, but it appears that depicting children with bondage teddy bears is boiling the frog too fast. I would have thought that children seeing men in bondage gear at Pride marches or being entertained by men in sexual costumes at public libraries might have done it, but no such luck. Balenciaga has shown us where the line has been drawn – for now.

If we truly care for children, we will capitalize on this rare re-sensitization and push the line back further. This began decades ago. Let Balenciaga be the catalyst for a recommitment to the defense of the innocence of children.