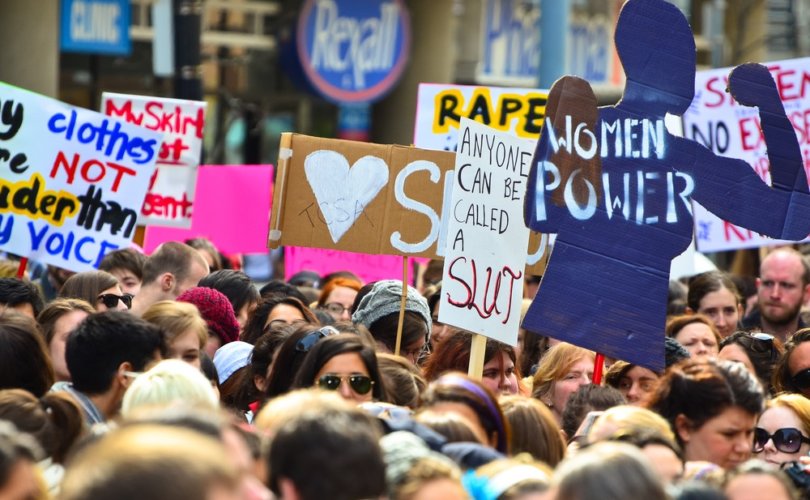 January 19, 2018 (LifeSiteNews) – As identity culture proliferates and the discussion about “trans issues”—which didn’t exist merely a decade or so ago—grows louder, it seems nearly impossible to pick up a newspaper without being confronted with the issue. The soap opera Grey’s Anatomy is setting out to transform the way trans people are viewed, including a storyline of a trans veteran to combat Donald Trump’s ban on transgender people serving in the military. Bradley Manning, the man convicted of leaking military secrets who now styles himself as “Chelsea,” announced that he would be running for the US Senate. One newspaper announced that a trans activist who released a shirtless photograph after having her breasts surgically removed was an example of “strength and courage” that “we could all learn from.”

But it has been bizarre to watch the transgender activists face off with the feminists, who are realizing that feminism is essentially an outdated dogma in a world where men can become women on a whim—and even win female awards, indicating that they are better at being women than biological women. This face-off has even turned physical in a few instances, such as when trans activists and radical feminists brawled in London’s Hyde Park last fall. More recently in Canada, feminists were outraged when a male-born trans woman was elected leader of Quebec’s largest women’s rights group, pointing out that he wasn’t “a real woman.”

The presence of Women’s Marches across North America has also highlighted the conflict between the trans movement and feminism. When I attended the Women’s March in Washington, DC last year as a journalist observer, I saw a sea of pink “pussy hats” worn by hundreds of thousands of men and women. It rapidly became the most recognizable symbol of the Women’s March movement. But now, the pink pussy hat is being abandoned as thoughtful activists have realized that the hat is probably extremely offensive to women of color as well as “women” who might have penises, or at least might not have vaginas.

In response to this, the Vancouver Women’s March promptly blocked Murphy and anyone else who expressed disapproval from viewing their page. Apparently, radical feminists with long resumes and impeccable credentials are now outranked in the women’s movement by male dominatrix prostitutes who claim to have changed their gender. In fact, there’s even a derisive term now for feminists who have a problem with transgenderism hijacking their movement: “TERFs,” or “trans-exclusionary radical feminists.” You can support abortion, be immersed in feminist ideology, and have protested on behalf of feminism for decades—but if you don’t think Hailey Heartless is a woman, you’re out.

The increasingly obvious ridiculousness of the progressive Left, as I’ve noted before, is one of the reasons that some many run-of-the-mill liberals are beginning to suspect that we’ve all gone a bit too far. When it is “transphobic” to say that men can’t get pregnant, the eyebrows of reasonable people begin to go up. When feminists are de-platformed for saying that a surgically-altered man cannot understand the biological experiences a woman goes through, confusion begins to set in. And when penises are considered as much female as they are male, people begin to understand that this rabbit hole has no bottom, and that it is perhaps time to get off the crazy train.

Let’s hope that enough people realize this before we destroy the upcoming generation with an ideology that is at war with reality.