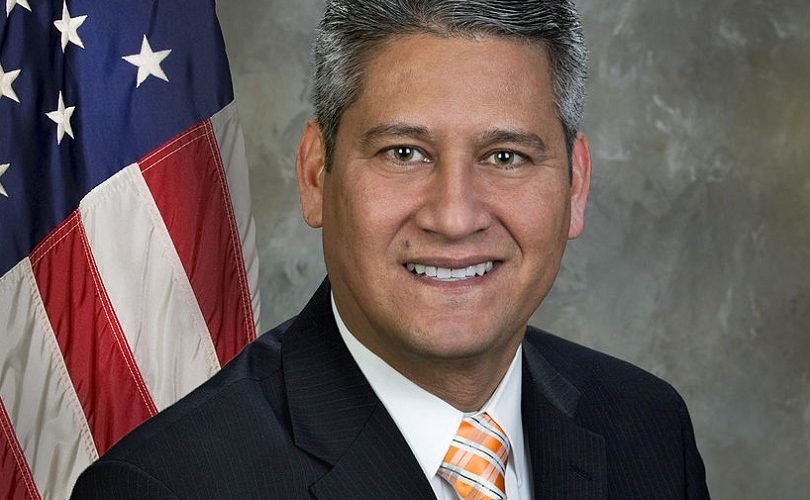 HARRISBURG, PA, May 13, 2015 (National Right to Life News) — In late April, we reposted a fine story by Maria Gallagher, the legislative director for the Pennsylvania Pro-Life Federation, in which she talked about a letter sent by more than 40 legislators raising serious questions about Pedro Cortes, who is the acting Secretary of State and Governor Tom Wolf’s nominee to fill the position. Why?

Because Cortes “previously served as Secretary of State during the [Governor] Ed Rendell Administration, a period of time in which the Department of State took no action against infamous abortionist Kermit Gosnell,” Gallagher wrote.

Well, yesterday Cortes’ nomination hit a “rough spot” when he appeared before the Senate State Government Committee. According to reporter Brad Bumsted, the committee “took “no position” on whether to confirm Gov. Tom Wolf nominee Pedro Cortes for secretary of the Commonwealth because the panel is divided about the role he played as a regulator in the case of Kermit Gosnell, the abortion doctor convicted of murder while running a Philadelphia clinic.”

Staff for the Senate State Government Committee could not recall the panel taking a similar position in recent history. The committee can make a favorable or negative recommendation.

“Cortes denied having knowledge of Gosnell’s operations or looking the other way,” Bumstead wrote. “He said it had been difficult emotionally on him and his family.”

Asked after the hearing for his views on abortion, Cortes, “who described himself as a ‘practicing Catholic’ and one-time altar boy,” declined to comment.

Gallagher reported that in the letter, the legislators stated:

To fully understand the gravity of the failures of the department throughout Secretary Cortes’ service, one needs to read directly from the grand jury’s damaging report.

“Between 2002 and 2009, Board of Medicine attorneys reviewed five cases involving malpractice and other complaints against Gosnell. None of the assigned attorneys or their supervisors, suggested that the Board take action against the deviant doctor. In fact, despite serious allegations, three of the cases were closed without any investigation. The other two were investigated and then closed — without any action being taken.”

The lawmakers’ letter also points out:

In his resume and biography Secretary Cortes takes credit for various achievements in dealing with occupational and professional licensure complaints and investigations during his tenure. Yet at the same time he takes no responsibility for the documented blatant failures of those same units under his leadership.

As NRL News and NRL News Today reported, the Philadelphia Grand Jury investigating Gosnell offered a blistering critique of city and state agencies for their failure to reign in Gosnell and his “House of Horrors.”

As we wrote back in April 2013, just prior to Gosnell’s conviction on three counts of first degree murder and one count of involuntary manslaughter:

The alleged atrocities Gosnell and his staff are accused of were not a deep, dark secret. The level—yes—but not that the abortion clinic was woefully inadequate and that women were in peril. Various health officials knew about some and could easily have known about a lot more, if they were the least bit interested. They weren’t. Politics carried the day. There is this from page nine of the Grand Jury report:

“After 1993, even that pro forma effort came to an end. Not because of administrative ennui, although there had been plenty. Instead, the Pennsylvania Department of Health abruptly decided, for political reasons, to stop inspecting abortion clinics at all. The politics in question were not anti-abortion, but pro. With the change of administration from Governor Casey to Governor Ridge, officials concluded that inspections would be 'putting a barrier up to women' seeking abortions. Better to leave clinics to do as they pleased, even though, as Gosnell proved, that meant both women and babies would pay.”

Just to be clear: Gosnell was free to run wild because to rein him in would be “putting a barrier up to women” seeking abortions. Pro-abortionists insist they never lobbied for non-enforcement, in fact, just the opposite. How credible is that to anyone over the age of 8?

Cortes’ nomination moves to the Senate Rules and Executive Nominations Committee. A Senate Republican spokeswoman “said a full Senate vote would not take place until June.”