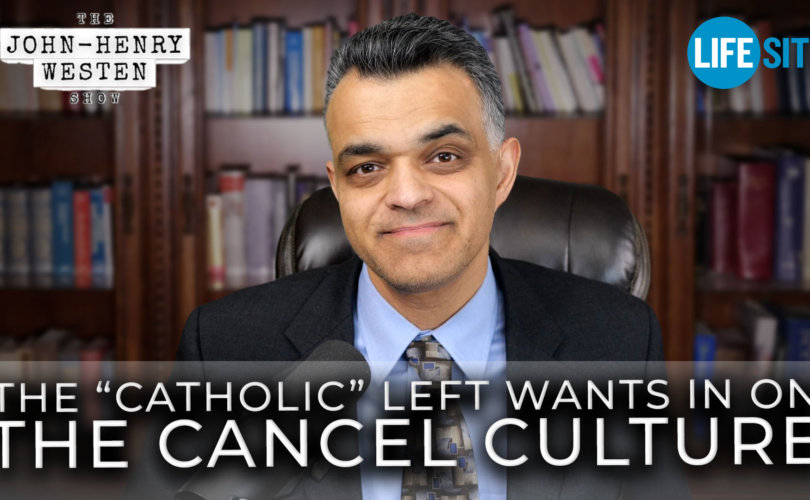 January 25, 2020 (LifeSiteNews) – Biden’s self-professed Catholicism has become a major focus of the media, and thus the example of anti-Catholic so-called Catholicism is being mainstreamed. They followed him out of Sunday Mass yesterday, his big push for abortion Friday on the anniversary of Roe v Wade made headlines everywhere, now we learn that the young poet which created such a stir at the inauguration went to Catholic school.

With Biden and Pelosi given the world stage to parade around as faithful “Catholics” with what looks like the full approval of Pope Francis, the one true faith is getting a black eye like it never has before. But all the buffeting is causing at a least some faithful bishops to speak out in defense of the truth. And Catholics are also being shown we have much more in common with allies outside the fold than with those who tear down the faith while pretending to be on the inside the Church.

Before we begin I wanted to let you know that Twitter has just suspended two of our main accounts for transgressing their transgender policy because we called a biological male a man. And our main You Tube channel has been suspended for two weeks for my show with the vaccine expert. So let me stress you need to come direct to LifeSiteNews.com.

Remember the young poet who made such a stir during the Biden inauguration with her rhymes and hand gestures, and her bright yellow coat and red hairband?

Sure she was talented in her recitation but her words dripped with leftist propaganda. Predictably the Catholic left went gaga over her performance.

The Jesuit America Magazine gushed over Amanda Gorman making special mention that she is Catholic a member of St. Brigid’s Catholic Church in Los Angeles.

America Magazine said of Gorman’s poem: “She delivered a performance that made us believe in the beauty of our future, precisely because of the poem’s own beauty. Her work speaks of God—even shines a light on God—simply because it is beautiful… Amanda Gorman transported me. I believed in the light and the goodness and the vision of holiness Ms. Gorman laid out because she offered it to me as music and image and breath.”

Not to be outdone, the National Catholic Reporter’s Michael Sean Winters opined: “Amanda Gorman, a National Youth Poet Laureate, delivered a poem that was stunning in its energy and beauty. … Her words spoke of healing and, like a sacrament, they effected what they signified.”

It was hardly any surprise to find that Planned Parenthood was also touting the young ‘Catholic’ poet, reminding us of another poem Gorman did promoting abortion.

Yesterday marked the first Sunday of the Biden Presidency and news media were on hand outside the uber-liberal Catholic Church to catch Biden as he exited the Mass. That Church by the way loves the homosexuality-promoting Fr. James Martin and gave him a standing ovation when he was invited there to speak.

Now under normal circumstances, having Catholicism on the world stage with the leader of the most powerful nation being Catholic would be an awesome witness. But given what this is it is a horror.

And in the Church today we seem unequipped to handle this nightmare. Remember in 2019 when Biden was denied Holy Communion in South Carolina and when asked by the media about it Biden said it was the first time it’s happened and that Pope Francis gives him Holy Communion.

In fact, this situation is a horror-story worse than the loss of the election. The horror of a false, even anti-Catholic Catholicism being promoted could not be more palpable than what happened Friday with the official statement from the Biden-Harris White House on the anniversary of the dreaded Roe v. Wade decision which forced abortion on all 50 states. The self-proclaimed faithful ‘Catholic’ Biden said in the statement, “In the past four years, reproductive health, including the right to choose, has been under relentless and extreme attack.” He added, “The Biden-Harris Administration is committed to codifying Roe v. Wade and appointing judges that respect foundational precedents like Roe.”

But Biden’s remarks did elicit some reaction from faithful bishops. Archbishop Joseph F. Naumann of Kansas City in Kansas, and chairman of the U.S. Conference of Catholic Bishops’ Committee on Pro-Life Activities responded publicly saying, “It is deeply disturbing and tragic that any President would praise and commit to codifying a Supreme Court ruling that denies unborn children their most basic human and civil right, the right to life, under the euphemistic disguise of a health service. I take this opportunity to remind all Catholics that the Catechism states, ‘Since the first century the Church has affirmed the moral evil of every procured abortion. This teaching has not changed and remains unchangeable.’ Public officials are responsible for not only their personal beliefs, but also the effects of their public actions. Roe’s elevation of abortion to the status of a protected right and its elimination of state restrictions paved the way for the violent deaths of more than 62 million innocent unborn children and for countless women who experience the heartache of loss, abandonment, and violence.”

Cardinal Raymond Burke also spoke out against it in a homily at Mass in the shrine to Our Lady he had built in Wisconsin.

Meanwhile, the Catholic left seems to be salivating at the example of cancel culture being driven by Big tech and the Democrats. They want in on the game. Case in point check out this January 7, 2021 editorial from National Catholic Reporter. They say “among those with some culpability for yesterday's failed insurrection are more than a few leaders in our church. Catholic apologists for Trump have blood on their hands.”

The leftist publication, known among faithful Catholics as ‘fishwrap’ and at one time told by the US bishops that they may not use the name ‘Catholic’ in their title, named various Catholic organizations, and individuals as having blood on their hands including “CatholicVote.org, Attorney General William Barr and other Catholics in the Trump administration, Amy Coney Barrett, Cardinal Timothy Dolan, Bill Donohue of the Catholic League, rogue prolifer Abby Johnson” and even “everyday Catholics — some 50% of them — who voted for Trump this year.”

“Many of these folks have been shaped by right-wing Catholic media, whether rogue priests on Twitter, websites such as Church Militant or LifeSiteNews, or the Catholic media conglomerate the Eternal Word Television Network (EWTN).”

As a person of colour, and the co-founder and editor-in-chief of LifeSiteNews. Let me speak to Bill Mitchell the CEO and Publisher of NCR. It is ironic that you, the epitome of the old white guy is calling me out for white nationalism. Given I’m neither white, nor an American but Canadian, it is rather comical. But what is serious indeed is that the vision of Catholicism that you proffer, is not true. It is a false Church with a false gospel, that leads not to eternal salvation but to the loss of eternal life.

And all kidding aside. You should know that the main motivation of LifeSite is and always has been the salvation of souls – including yours. So, there is no intent to harm you, nor anyone else. There is only the hope, prayer and witness that will with the grace of God lead you to the one true Jesus Christ, the same yesterday, today and forever.

One interesting thing all of this fight over true and false Catholicism has demonstrated a truth rarely mentioned. Namely, that faithful Catholics have much more in common with Christians of other denominations or pro-life, people from other religions, than nominal Catholics preaching another gospel.

Take for example Derek Sloan, the contender for the Conservative Party of Canada who is a Seventh Day Adventist and not a Catholic. He was the most outspoken defender of life, family, faith and freedom in the whole leadership. He was not successful in his challenge for leadership of the Party losing out to Erin O’Toole another nominal Catholic who openly supported abortion and homosexuality during his leadership campaign.

Well O’Toole, another anti-Catholic Catholic in the mold of Biden but pretending to be a Conservative has just ousted Sloan from the Conservative Party with false charges of racism.

I spoke with Sloan about this Friday. Watch today’s full episode to see our conversation.

We have much more in common with our separated bretheren even non-Christians who support life, family and freedom than we do with those wolves in sheep’s clothing who are out to remove us from the public square.

And let me conclude by encouraging you once again to view that outstanding interview LifeSite’s Claire Chretien did with pro-life leader Austin Ruse. He told us that this is an incredible time to be a Catholic. That the halos are hanging from the lowest branches.

Indeed the halos are hanging from the lowest branches. The grace is there for all of us to reach up and grab one.

Do so my friends with great joy.