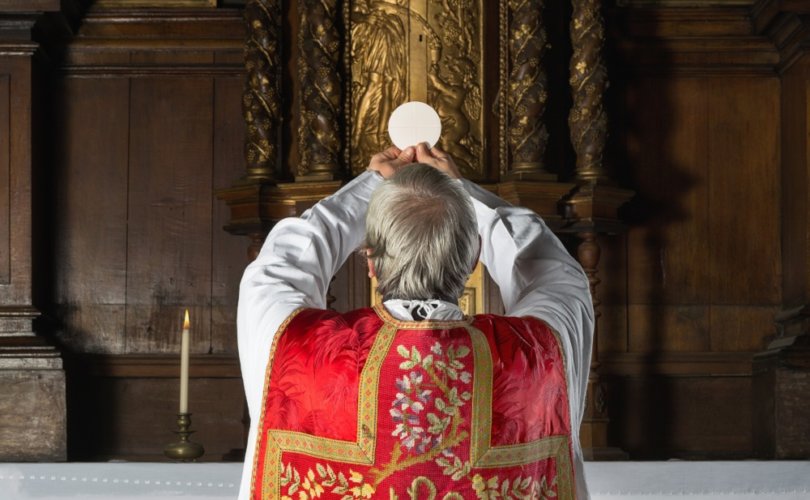 March 18, 2020 (LifeSiteNews) — In an article entitled “Private Mass Does Not Fit with a Contemporary Understanding of Eucharist” (first published in German at katholisch.de), three tired old “liturgists” from Bonn, Erfurt, and Münster are thundering from their academic “cathedras” against Mass being celebrated without the presence of the faithful.

These academics have nothing better to do than try to conserve what they perceive as “wins” from the postconciliar period, when the Mass, instead of being seen as a grace-bestowing renewal of the Sacrifice of Calvary, was reinterpreted as a horizontal social event not very different from a Protestant assembly. The inherent value of the priest’s daily offering of the all-pleasing Victim for his own spiritual benefit and the benefit of the entire Church was downplayed in favor of concelebrations; often priests fell into the habit of saying Mass only when scheduled to do so in public.

This reductive notion of the Mass has never been the mind of the Holy Catholic Church, nor is it her mind today.

When such errors first began to arise after the Council, Pope Paul VI condemned them firmly in his Encyclical Letter Mysterium Fidei of 1965. He stated: “It is not permissible to extol the so-called ‘community’ Mass in such a way as to detract from Masses that are celebrated privately” (n. 11). Later in the document, he comments on “the public and social nature of each and every Mass”:

For each and every Mass is not something private, even if a priest celebrates it privately; instead, it is an act of Christ and of the Church. In offering this sacrifice, the Church learns to offer herself as a sacrifice for all and she applies the unique and infinite redemptive power of the sacrifice of the Cross to the salvation of the whole world. For every Mass that is celebrated is being offered not just for the salvation of certain people, but also for the salvation of the whole world. The conclusion from this is that even though active participation by many faithful is of its very nature particularly fitting when Mass is celebrated, still there is no reason to criticize but rather only to approve a Mass that a priest celebrates privately for a good reason in accordance with the regulations and legitimate traditions of the Church, even when only a server to make the responses is present. For such a Mass brings a rich and abundant treasure of special graces to help the priest himself, the faithful, the whole Church and the whole world toward salvation — and this same abundance of graces is not gained through mere reception of Holy Communion. (n. 32)

Rejecting the Mass without a congregation is neither more nor less than a rejection of the dogmatically defined Catholic understanding of the Mass, which is not about this or that group of people who happen to be present, but about bringing our world and all of the faithful back to the Father through Jesus Christ. It is obviously good when the faithful are present to participate in this offering — it is good for them — but the offering remains objectively real and efficacious whether a thousand, twenty, or no members of the faithful are present in person.

Are we forgetting, too, that Mass is offered in the presence of the holy angels and in communion with the saints of the Church triumphant so often honored in the liturgy and especially in the Eucharistic Prayer? Even a priest “alone” in a chapel is never alone; he is always in the company of God’s elect, “wrestling not against flesh and blood, but against principalities and powers, against the rulers of the world of this darkness, against the spirits of wickedness” (cf. Eph. 6:12). Of course, this cosmic perspective — which is that of Sacrosanctum Concilium no less than of Catholic tradition as a whole — depends on a living faith in what cannot be seen by the human eye. The German progressivists seem to reduce everything to what can be seen, betraying a lack of faith in the invisible realm, which is not less but far more real than the physical world around us.

As I detailed in an article at New Liturgical Movement, we find encouragement for the priest’s personal offering of Mass in the current Code of Canon Law as well as in the postconciliar Magisterium. In his Encyclical Letter Ecclesia de Eucharistia (2003), John Paul II teaches as follows:

If the Eucharist is the center and summit of the Church’s life, it is likewise the center and summit of priestly ministry. For this reason, with a heart filled with gratitude to our Lord Jesus Christ, I repeat that the Eucharist “is the principal and central raison d’être of the sacrament of priesthood, which effectively came into being at the moment of the institution of the Eucharist.”… We can understand, then, how important it is for the spiritual life of the priest, as well as for the good of the Church and the world, that priests follow the Council’s recommendation to celebrate the Eucharist daily: “for even if the faithful are unable to be present, it is an act of Christ and the Church” (Vatican II, Presbyterorum Ordinis, 13). In this way priests will be able to counteract the daily tensions which lead to a lack of focus and they will find in the Eucharistic sacrifice — the true center of their lives and ministry — the spiritual strength needed to deal with their different pastoral responsibilities. Their daily activity will thus become truly Eucharistic. (n. 31)

The Eucharistic form of the Christian life is seen in a very special way in the priesthood. Priestly spirituality is intrinsically Eucharistic.… An intense spiritual life will enable him [the priest] to enter more deeply into communion with the Lord and to let himself be possessed by God’s love, bearing witness to that love at all times, even the darkest and most difficult. To this end, I join the Synod Fathers in recommending “the daily celebration of Mass, even when the faithful are not present” (Propositio 38). This recommendation is consistent with the objectively infinite value of every celebration of the Eucharist, and is motivated by the Mass’s unique spiritual fruitfulness. If celebrated in a faith-filled and attentive way, Mass is formative in the deepest sense of the word, since it fosters the priest’s configuration to Christ and strengthens him in his vocation. (n. 80)

The General Instruction of the Roman Missal that governs celebrations in the “Ordinary Form” provides rubrics for the offering of Holy Mass when only one minister participates (nn. 252–272), and for the offering of Holy Mass without the participation of a minister (n. 254). The rubrics that govern the celebration of the “Extraordinary Form” likewise provide for such a situation. Such consistent provision over many centuries, before and after the Second Vatican Council and down to the present, would make no sense if this scenario were not anticipated as a necessary and praiseworthy practice in certain situations. It is manifestly neither an abuse nor an “outmoded idea,” pace our Bonn professors.

The prayer of our Eternal High Priest is the holiest and most powerful of all prayers, and the Mass is His salvific prayer, His sweet-smelling oblation, offered at the hands of the ordained minister for the welfare of the living and the dead, and for the priest’s own sanctification. If the priest is not holy — if he does not assiduously pursue conformity with Christ the High Priest — his ministry will be increasingly empty, shallow, fruitless. That is of no benefit to the People of God.

In times of danger and difficulty, the faithful and their ministers stand in even greater need of the grace of God, supporting and strengthening them. To deprive the Church of so great a good as a single Holy Mass, or to encourage priests to deprive themselves of it on any day, would reflect not so much an enlightened attitude as a weak faith, a turning away from the supernatural, a tepid charity, a placing of hope in this world and its “solutions.” Whatever their merits, worldly solutions are not ultimate ones, and they cannot bring us the divine help we need.

Correction, 03-19-20: This blog post was updated to accurately reflect the locations of the three liturgists advocating against private Masses. LifeSite regrets the error.