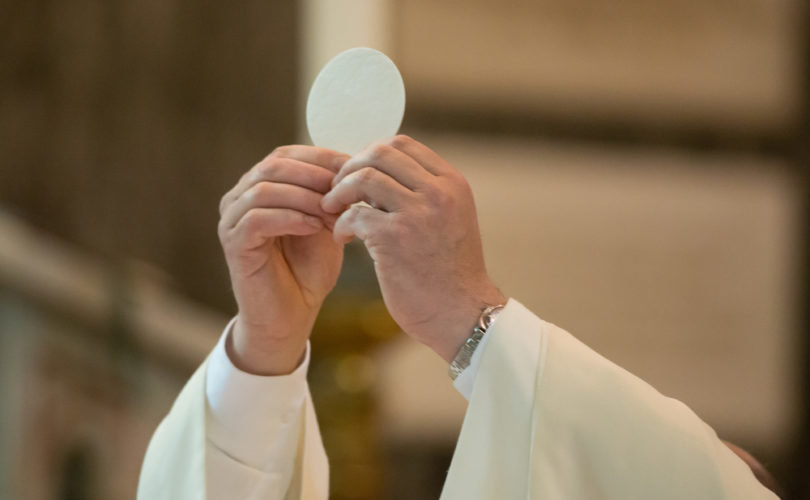 Editor's note: Peter Kwasniewski's first part in this series can be read here: The spiritual danger of unworthy communions: a key point in the Amoris debate

October 30, 2017 (LifeSiteNews) — Last week I spoke about how dangerous it is to fail to heed St. Paul’s warning to the Corinthians (1 Cor 11:27–29) about the need to examine ourselves before we approach the Most Holy Sacrament of the Altar, lest we sin against the Lord and make ourselves worse off than we were before. While it is true that the Eucharist is given as a medicine for the weak, the meaning of “weakness” here is not the spiritual death induced by mortal sin, which leaves us incapable of eating (as St. Thomas says, a dead man cannot consume food; he needs rather to be resurrected from the dead through Penance), but the fragile health of being in a state of grace while still dwelling in this corruptible flesh, struggling against the wounds of original sin, such as disordered concupiscence.

The celebration of the Eucharist, however, cannot be the starting-point for communion; it presupposes that communion already exists, a communion which it seeks to consolidate and bring to perfection. … Invisible communion, though by its nature always growing, presupposes the life of grace, by which we become “partakers of the divine nature” (2 Pet 1:4), and the practice of the virtues of faith, hope and love. …

Keeping these invisible bonds intact is a specific moral duty incumbent upon Christians who wish to participate fully in the Eucharist by receiving the body and blood of Christ. The Apostle Paul appeals to this duty when he warns: “Let a man examine himself, and so eat of the bread and drink of the cup” (1 Cor 11:28). Saint John Chrysostom, with his stirring eloquence, exhorted the faithful: “I too raise my voice, I beseech, beg and implore that no one draw near to this sacred table with a sullied and corrupt conscience. Such an act, in fact, can never be called ‘communion’, not even were we to touch the Lord’s body a thousand times over, but ‘condemnation’, ‘torment’ and ‘increase of punishment.’” …

I therefore desire to reaffirm that in the Church there remains in force, now and in the future, the rule by which the Council of Trent gave concrete expression to the Apostle Paul’s stern warning when it affirmed that, in order to receive the Eucharist in a worthy manner, “one must first confess one’s sins, when one is aware of mortal sin.” … Christ is the truth and he bears witness to the truth (cf. Jn 14:6; 18:37); the sacrament of his body and blood does not permit duplicity.

How can we fail to be amazed at how fast John Paul II’s teaching has been swept aside, as if it were totally outdated? Of course, the rejection of the New Testament in general and of St. Paul in particular in liberal Catholic circles is a worse problem; but folks, John Paul II was our pope not all that long ago, and he clearly and repeatedly taught that there is no possible way for the divorced and remarried to come to sacramental communion unless they altogether cease having sexual relations. The Lord has warned us repeatedly and in no uncertain terms about the evil of adultery, always and in every situation, so it’s not easy to plead “invincible ignorance.” To cease and desist from adulterous behavior is the only possible way to overcome an objectively discordant state of life, one that is inherently contrary to God’s will for man. All this is taught with perfect clarity in many encyclicals and letters of John Paul II (not to mention countless other papal and conciliar teachings). The Church has absolutely no power to admit the civilly remarried to the Most Holy Eucharist, no more than she has the power to dissolve a ratified and consummated marriage.

Unless you are a voluntarist who thinks that all morality is simply a set of arbitrary divine decrees, not even God Himself has power to countenance adultery, any more than He can make 2+2 = 5. Remember, Our Lord Jesus Christ said that Moses permitted an evil because of an evil—namely, he permitted divorce because of hardness of hearts. He did not say that when Moses permitted divorce it ceased to be evil and became good, but now Jesus is going to throw the switch in the opposite direction and declare it sinful. It was always evil and will always be evil, no matter the age, the culture, or the circumstances.

With this, as with so much else, people refuse to abandon the democratic fallacy—a fashionable fallacy, even among high-ranking officials who should know better—that majority opinion determines the truth, and that if enough people want something badly enough, the State or the Church ought to give it to them. Case in point: the ordination of women to the priesthood. When John Paul II addressed it definitively in Ordinatio Sacerdotalis, he did not rest his case on mere arguments, he did not say that he was going to settle the question once and for all; he said the question had already been determined, because the Church does not have any power to do otherwise.  The same is true of communion for the adulterous: there is no other teaching that can be given. Anyone, moreover, who attempts to deny or downplay this double sin—the sin of adultery and the sin of sacrilegious communion—is himself guilty of grave sins of faithlessness, injustice, and lack of charity, of sufficient magnitude to merit his own damnation.

The unfolding of events has brought a welcome clarity: Belial hath no concord with Christ, the faithful with the unbeliever (cf. 2 Cor 6:15). Can anyone deny that there is a de facto schism in the Church?

Fact #1: The seven sacraments belong to deposit of faith; the Eucharist, in particular, is the sign and cause of the unity of the Church.

Fact #2: A sacramentally married Catholic who has attempted a subsequent civil marriage and lives more uxorio is living in an objective state of moral disorder, which the Church has always called adultery. Regardless of subjective motivations, adultery is always and everywhere displeasing to God, that is, seriously sinful. No argument is required to support this; God’s solemn word in both Testaments is enough, although the Magisterium of the Church has repeatedly restated it so that they can be no doubt among men of good will.

Scenario #1: If this “remarried” Catholic lives in Poland or certain dioceses of Africa or the USA, he/she is forbidden to receive the sacraments, including Confession and the Eucharist, unless he/she repents of this moral disorder and resolves to live chastely, that is, forswearing sexual intercourse with his/her partner.

Scenario #2: If, on the other hand, this Catholic lives in Malta, Sicily, Argentina, Germany, Belgium, or certain US dioceses, he/she is allowed to receive said sacraments, without any such repentance or resolution.

Conclusion #2: This disagreement pertains to the divine constitution of the Church, to her essence as a communion of charity. Unless the principle of non-contradiction is false and what is mortally sinful in one diocese can be permissible or even virtuous in another, one of the two views must be wrong. And those who hold the wrong view are not only materially heretical but also guilty of sinning against the unity of the Church.

There is no way around this logic. Facts 1 and 2 cannot be denied. Regrettably, Scenarios 1 and 2 are no less true. Therefore, Conclusions 1 and 2 follow of necessity. That is why commentators who speak of a de facto schism are perfectly correct.