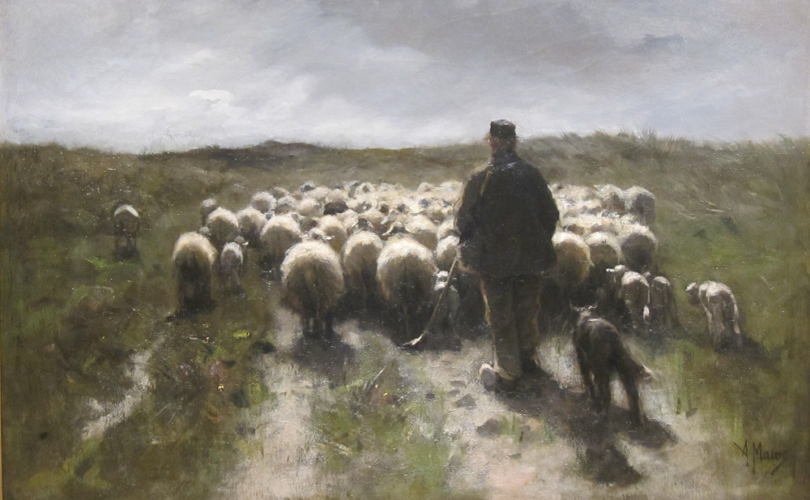 Thus writes St. Ephrem the Syrian, a deacon and Doctor of the Church, in his Hymns on the Nativity. The Eastern Orthodox English composer John Tavener (1944–2013) set this text powerfully to music in his 1990 choral work Thunder Entered Her.

St. Ephrem helps himself freely to the paradoxes of the great feast we are celebrating around the world. How can a Lord be a servant? How can a Word become silent? How can the voice of thunder be still? How can a Shepherd become a lamb?

Only God can accomplish such mighty deeds, because He indeed is Lord of all — so great, as Pope Benedict XVI said, that He can become small without ceasing to be great. The Word is so dense with meaning, so ineffable and unfathomable, that silence befits it better than a discourse, even if we can never cease proclaiming these wonderful deeds. The thunder and lightning of Sinai are the signs of the presence of the one who is Law and Love, the “still, soft voice” that speaks in man’s conscience. The Shepherd of all foreknows and encloses the Lambs in His arms, and has the power and the willingness to be among them as one of them: “that which He was not He took up, while that which He was He remained.”

At the Mass for the Imposition of the Pallium, Conferral of the Fisherman’s Ring, and Inauguration of the Pontificate on Sunday, April 24, 2005 — nearly fifteen years ago already — Pope Benedict XVI preached the first of his countless memorable papal homilies that form a body of wisdom to which Catholics will be looking back for centuries, after more ephemeral prior and posterior effusions have perished. In his homily, the pope, without citing Ephrem directly, picked up on the same theme in describing a piece of episcopal vesture:

The symbolism of the Pallium is even more concrete: the lamb’s wool is meant to represent the lost, sick, or weak sheep which the shepherd places on his shoulders and carries to the waters of life. For the Fathers of the Church, the parable of the lost sheep, which the shepherd seeks in the desert, was an image of the mystery of Christ and the Church. The human race — every one of us — is the sheep lost in the desert which no longer knows the way. The Son of God will not let this happen; he cannot abandon humanity in so wretched a condition. He leaps to his feet and abandons the glory of heaven, in order to go in search of the sheep and pursue it, all the way to the Cross. He takes it upon his shoulders and carries our humanity; he carries us all — he is the good shepherd who lays down his life for the sheep.

What the Pallium indicates first and foremost is that we are all carried by Christ. But at the same time it invites us to carry one another. Hence the Pallium becomes a symbol of the shepherd’s mission[.] … The pastor must be inspired by Christ’s holy zeal: for him it is not a matter of indifference that so many people are living in the desert. And there are so many kinds of desert. There is the desert of poverty, the desert of hunger and thirst, the desert of abandonment, of loneliness, of destroyed love. There is the desert of God’s darkness, the emptiness of souls no longer aware of their dignity or the goal of human life. The external deserts in the world are growing, because the internal deserts have become so vast. Therefore the earth’s treasures no longer serve to build God’s garden for all to live in, but they have been made to serve the powers of exploitation and destruction. The Church as a whole and all her Pastors, like Christ, must set out to lead people out of the desert, towards the place of life, towards friendship with the Son of God, towards the One who gives us life, and life in abundance.

How different is this Christ-like shepherd depicted by Benedict XVI from the wicked shepherd discussed by the Prophet Zechariah (11:4–5, 16–17)?

Thus says the Lord my God: Feed the flock of slaughter, whose possessors slay them and hold themselves not guilty; and those who sell them say, “Blessed be the Lord, for I am rich.” And their own shepherds do not pity them.

Here, then, is a shepherd who lets his human sheep be slain by mortal sin and holds himself unresponsible for their slaughter; who sells them off and does not regret their loss to the hands of strangers; who has no pity for the lost and straying, the wretched and impoverished. Strikingly, Zechariah even prophesies that God will “raise up” such a shepherd (in the language of Scripture, this means He will permit it to happen):

I will raise up a shepherd in the land who will not visit those who are cut off, nor seek those who are scattered, nor heal that which is broken, nor feed that which stands; but he will eat the flesh of the fat sheep and will tear their hooves in pieces. Woe to the worthless shepherd who leaves the flock! The sword shall be upon his arm and upon his right eye. His arm shall be clean dried up, and his right eye shall be utterly darkened.

Every prophet in the Bible says the same. For example, Ezekiel:

Son of man, prophesy against the shepherds of Israel, prophesy, and say unto them, even to the shepherds, Thus saith the Lord Jehovah: Woe unto the shepherds of Israel that do feed themselves! should not the shepherds feed the sheep? Ye eat the fat, and ye clothe you with the wool, ye kill the fatlings; but ye feed not the sheep. … And they were scattered, because there was no shepherd; and they became food to all the beasts of the field, and were scattered. … Behold, I am against the shepherds; and I will require my sheep at their hand, and cause them to cease from feeding the sheep; neither shall the shepherds feed themselves any more; and I will deliver my sheep from their mouth, that they may not be food for them. (Ezek. 34:2–3, 5, 10)

This shows how important it is to the Lord Jesus Christ, the true Shepherd of Israel, the Ruler of the Church, that His earthly representatives be holy and dutiful in their shepherding, lest they be arraigned for awful judgment on the last day: “Woe to the worthless shepherd who leaves the flock”!

O Lord Jesus Christ, exemplary servant of the servants of God, true deacon of mankind!
You have come to our aid, time after time, age after age, in crisis after crisis.
We beseech you, hear us and have mercy, come to our aid even now,
do not delay, deliver us with your strong right arm!
O Word, penetrating and pervasive even when derided or ignored:
overcome the cacophony that surrounds us,
restore the wisdom we have squandered in our empty pursuits!
Thunder, enter us and still us before you.
O Shepherd of Israel, you who lead Joseph like a flock,
Lamb standing as one slain, redeem us with your precious blood,
and lead us out of the desert into a land flowing with milk and honey, truth and love.
Save us, we implore you, from all worthless shepherds,
and bestow on us shepherds after your own Heart.