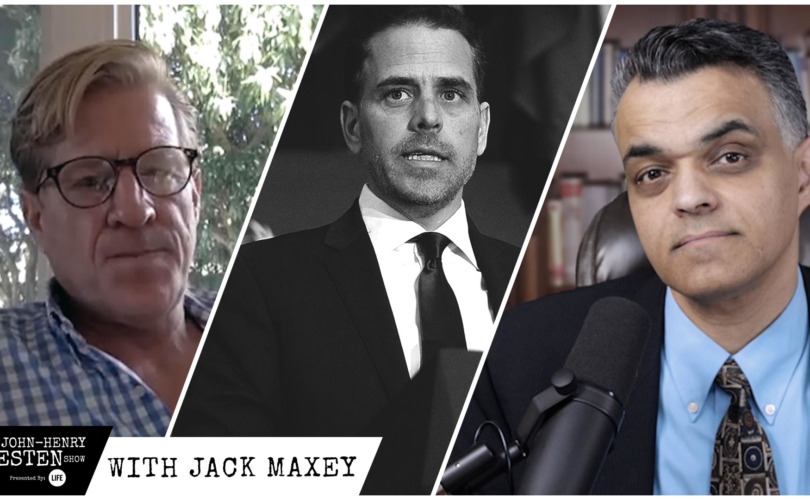 March 16, 2021 (LifeSiteNews) – In this episode of The John-Henry Westen Show, I sit down with Jack Maxey, former co-host of Steve Bannon's War Room, to talk about his research into the Hunter Biden laptop.

In the months surrounding the election and afterwards, as many current and former government leaders in the US were dismissing the information contained in the laptop, Maxey, Rudy Guiliani, and many others have been pushing out the truth about the corruption in the Biden family. Maxey tells me that, although the contents were denied as valid and were even called “Russian disinformation,” the laptop was confirmed as “100 percent real” by “several retired CIA agents…a former contractor from the NSA, [and] cybersecurity experts.”

Nevertheless, as Maxey says, many governmental agencies, including the FBI, knew “everything that's in this [laptop] for now almost a year and a half,” and yet did not reveal it to the American people during an election cycle with one of the main candidates being compromised by that information.

Maxey details some of the moral corruption of Hunter Biden, and how his family did not report him to authorities for his sexual and child abusive behavior. He says how the laptop gives “a dark insight” into the pressure the Biden family was putting on Hunter to essentially “monetize Joe Biden's office.”

Also, Maxey mentions how Hunter Biden never denied the allegations of child abuse. He also told me some specific evidence of how exactly Hunter Biden, and in turn his whole family, was involved in shady business dealings in the Ukraine, Communist China, and many other countries.

Maxey states that for America “the real threat is that Joe Biden is not in charge of the county,” but instead is a puppet to the intelligence community who kept the information of the Hunter Biden laptop from the American people. Moreover, he says that had the people known this high level of corruption, Biden would not have even been chosen as the Democrat nominee, and that a President Biden “really defies logic to me unless he had help.”

As he has been spending months sifting through and researching the laptop, much of which contains pornographic material, Maxey has been seeking divine aids, including from Our Lady. He says that “there have been many moments during this whole experience where I have felt cloaked in darkness … but with prayer and courage” he continues to overcome those evils.