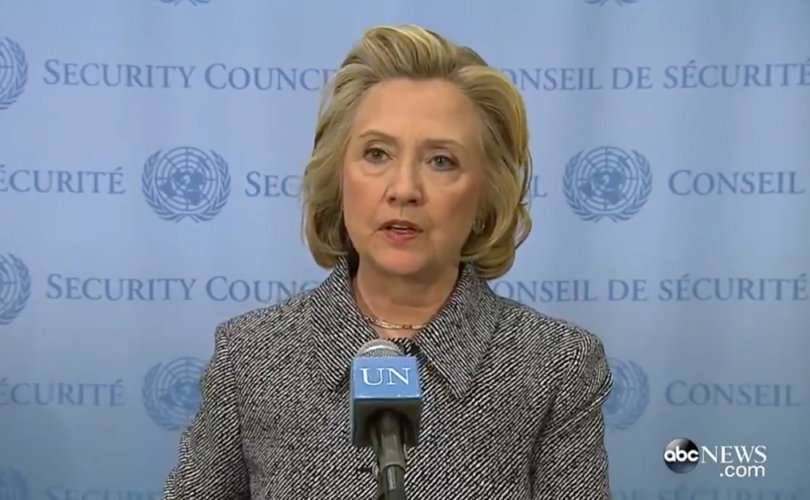 January 3, 2018 (LifeSiteNews) – This is different than any of my past articles. I am including an entertaining and yet dead-serious, Twitter-posted video creatively highlighting just some of the insanity that the Clinton's, especially Hilary, have gotten away with.

There has not been any reasonable due process, necessary criminal charges and what would appear to eventually be almost certain convictions and lengthy prison sentences – if – a big IF – all is done as it normally should be done.

The extraordinary untouchable status of the Clintons is sickening and a danger to the legal and political systems of the United States. All publicly available evidence points to massive, bold, totally unrepentant, ruthless corruption.

It is gross negligence or just plain total cowardice that no one in authority has taken strong, clearly called for actions against the Clintons and their many nefarious schemes, abuses, threats and frequently alleged violence against any who have gotten in their way.

The Department of Justice must begin taking legal actions against the Clintons, their money-laundering foundation and their undeserved extreme-protected status.

This video is a little difficult to follow. That is, the audio is not always clear. However, persevere, and by the end you should be sickened and compelled to contact the White House. If possible, watch the video full screen on a monitor. It is easier to follow that way.

Keep in mind all the words in this video are the real words of James Comey and Hilary Clinton. This is NOT fiction.

A Trump administration appears to be the only one that will have the guts to get the very necessary cleansing of this political rot done. Time for delay is over.

I give Trump some benefit of the doubt in that a lot of ducks had to first be put in order before a strong case and strategy could be assembled to fully and finally bleed out this cancer undermining the national interest.

Next on the list must be the Clintons' and Obama's dear friend and psychopathic, extreme globalist, George Soros. Then, Clinton and Soros co-conspirator, Barack Obama.

Very important among the reasons that this must be done is that these three – the Clintons, Soros and Obama – have been  intensely working to destroy the Trump presidency so that their deadly New World Order plans can resume.

It would be a grave mistake not to take this seriously. There is a window of opportunity now that must not be squandered.

Planned Parenthood honors Hillary Clinton as ‘champion of the century’

Clinton got it WRONG on forced abortion in China