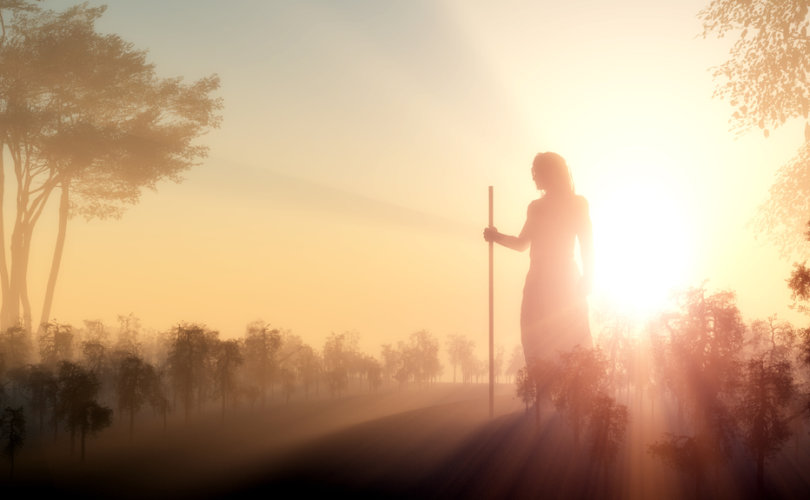 April 23, 2019 (LifeSiteNews) — A pessimist is one who always looks on the dark side of things and never sees any light, even a faint gleam. He is like the apostle who said: “To what purpose is this waste? For this [ointment] might have been sold for much and given to the poor” (Mt. 26:8). He did not see the beauty of the love behind the costly “waste” of ointment, nor the worthiness of the one on whom it was lavished, for whom no expense of love, effort, or beauty could ever be too much.

Yes, St. John Chrysostom famously said we should melt down chalices in order to buy food for the poor. But the same saint spoke in awe-inspiring terms about the reverence owed to the Blessed Sacrament. He was no slouch when it came to the dignity of the liturgy. What he meant is that there can be a hoarding of beautiful things beyond need that deprives the human needy of their due. The Catholic instinct has always been to see both sides: that God deserves the best we can bestow on Him, and that the image of God found in the poor also deserves food, drink, shelter, and most of all love.

History, in fact, shows that ages most known for their glorious works of Christian art — such as Notre Dame Cathedral, so much in the news last week — are also ages known for their generosity toward the needy in the form of alms, hospitals, and religious orders providing every sort of service. The two go hand in hand, because both are rooted in faith in God, the desire to love Him and His rational creatures, and a belief in the afterlife, in which God rewards those who serve Him and punishes those who pursue their own selfish ends — including secular “health care” and the cult of the body.

This is why it was so frustrating to read about secularists arguing that Notre Dame Cathedral is a symbol of waste and mistaken priorities and should not be rebuilt to the cost of millions of Euros, or that, if it is to be rebuilt, it should be in a self-consciously current style, a symbol of our modern values. What the secularists are missing is that the universally admired beauty and timeless appeal of this structure arose from living faith in a transcendent and incarnate God, and that the moment we put ourselves or our projects in place of Him, we set up a worthless idol that deserves to perish in flames.

Because man is made to the image of God, it follows that dethroning God from His central place entails, sooner or later, the destruction of man. This is why abortion is the satanic “sacrament” of liberalism: if there is no God, then reality is chaos, life is burdensome, and human beings should be targeted for extermination. Thus speaks the pessimist.

An optimist is one who looks selectively at reality to “edit out” the negative bits because he is afraid to admit them. They frustrate his tidy categories and challenge his easy explanations. He specializes in Photoshopping out the false, ugly, and evil things that populate a fallen world groaning for redemption.

For example, within the Church, we find Catholics who, confronted with the latest lie, cover-up, hypocrisy, error, ambiguity, or contemptuous remark of Pope Francis, quickly turn away, lest their eyes or ears take note, or brush it aside as misreported or misunderstood, or devise an elaborate theory by which to make mountains into molehills.

Such a person is, in fact, no less dangerous than the pessimist, but in a quite different way. The one turns everything into a hopeless tragedy; the other turns everything into a lighthearted comedy. The shrug of the shoulders and the easy smile are no less rebellious against reality and therefore against God than the shaken fist or the bloody hand. The optimist perpetuates situations of evil that might be remedied by honest examination and diligent effort. His filter prevents him from calling evil evil, which is the first and most deeply human response we can make to evil. In fact, his filter may even prevent him from praying to God for intervention, strength in battle, and vengeance, as the inspired Psalmist does again and again. In this way, optimism plots the defeat of goodness as much as pessimism does.

No one doubts that an ordinary man can get on with this world: but we demand not strength enough to get on with it, but strength enough to get it on. Can he hate it enough to change it, and yet love it enough to think it worth changing? Can he look up at its colossal good without once feeling acquiescence? Can he up up at its colossal evil without once feeling despair? Can he, in short, be at once not only a pessimist and an optimist, but a fanatical pessimist and a fanatical optimist? Is he enough of a pagan to die for the world, and enough of a Christian to die to it? In this combination, I maintain, it is the rational optimist who fails, the irrational optimist who succeeds. He is ready to smash the whole universe for the sake of itself.

The Paschal Mystery fundamentally realigns our vision of reality. Worldly optimism was nailed to the Cross; worldly pessimism was trampled by the risen Lord. The artificial light of optimism was extinguished by the total darkness of Golgotha. The self-absorbed midnight of pessimism was banished in the victorious light of Easter. The glorious Victim, the wounded Savior, reconfigures what is light and what is darkness, and radically reforms our own vision of what life is all about.

The judgment behind optimism might be expressed as follows: “Things are basically all right, and we can take care of the evils by our own plans and efforts.” But this is as false as can be. The evil is well out of our control, especially today, and only God, who is goodness itself, incorruptible and holy, can cure us and protect us.

The judgment behind pessimism might be expressed thus: “Things are hopelessly bad — not even God can help now. Or if He can, He doesn’t want to.” In reality, as the empty tomb proclaims, God triumphs in hidden and surprising ways: “My thoughts are not your thoughts, neither are your ways my ways. As the heavens are higher than the earth, so are my ways higher than your ways and my thoughts than your thoughts” (Is. 55:8–9).

We do not have here an abiding city, and we know that this passing world is destined to pass away (1 Cor. 7:31). The one who sees clearly is the one who can see that “all hell’s broke loose” in this world, and yet that heaven, the Kingdom of Heaven, is really and truly among us, within us (Lk. 17:21) — albeit “in mystery,” as Lumen Gentium puts it, and not in its fully manifest, fully triumphant form, which is the heavenly Jerusalem.

Neither optimism nor pessimism can have the final word. The one and only “final word” is the Word made flesh, bruised for our transgressions and raised for our deliverance, forever bearing His glorious wounds through which eternal life comes to us and makes our lives worth living.