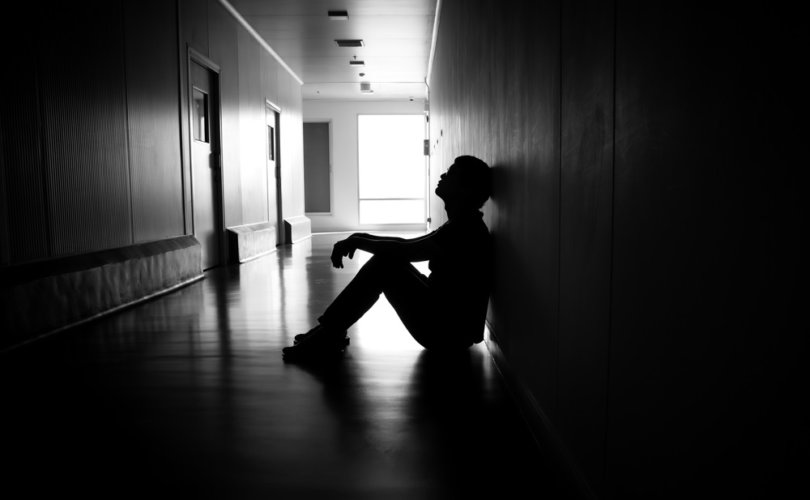 Let us take despair. I have in mind the act by which one despairs of reality as a whole, as one might despair of a person. … I believe that at the root of despair there is always this affirmation: “There is nothing in the realm of reality to which I can give credit — no security, no guarantee.” It is a statement of complete insolvency. [1]

The liquid assets of reality have run out, and after a fruitless search for social or psychological aid, nothing remains but a great depression, a crippling lack of commitment to the duties of life.

Nowhere in the modern world is this spiritual darkness more evident than in the accelerating demise of the traditional family. The wavering of fidelity from within, and the attempts of political propagandists to undermine the family from without, have pushed us closer and closer to a world without structure, without morals, without loyalty, without peace.

In these circumstances, with what might seem like a never-ending flow of bad news, it can be altogether too easy for Christians to fall prey to discouragement. It might seem as if no matter what we do, the tide cannot be reversed; no matter how much we protest or campaign, the results are more and more mixed and limited; we are even tempted to think that God is not listening to our prayers, or perhaps has chosen not to respond because we are too complicit and compromised to be worthy of His intervention. We feel abandoned.

We can read about a saint who had this feeling in the Old Testament: Elijah (1 Kgs. 19). He was ready to despair and give up. God sent an angel to him with food and drink, and, after sleeping, he was able to continue to the mountain of God. We can see this as a parable: God sends messengers to us, in obvious or hidden ways, bearing sustenance and good advice for our journey.

We can also see in Elijah’s story a warning against despair, which — so far as it lies in us — makes us useless to God, to ourselves, and to our neighbor. In truth, God does not generally save kingdoms with miraculous signs in the heavens (although He can do that and has done it). He seems to prefer the quieter method of bringing aid to this or that person by an act of charity, like a mother giving food and drink to her child, or a husband giving a listening ear to his wife, or a parishioner giving a helping hand to another parishioner who is moving house. It is our illusions about “winning big” that make us neglect the small victories of charity that are the mustard seeds of the kingdom of God.

My wife was reading a book recently called Thérèse, quelque secrets de la joie,  and came across a section that struck us as the perfect meditation for our times. Here is her translation:

It had been announced that the Devil was going to close up shop and offer his tools to anyone who was willing to pay the prices.

The day of the sale, his tools were exposed in an attractive manner: malice, hatred, envy, jealousy, sensuality, deceit — all the instruments of evil were there, each one with its price marked.

Separate from the rest, there was an inoffensive looking implement, also in used condition, but the price was higher than all the others.

Someone asked the Devil what it was. “It’s DISCOURAGEMENT,” was the answer.

“Well! Why have you priced it so high?”

“Because,” responded the Devil, “it’s so useful to me that the others hardly matter. With this, I can get into anyone, and once on the inside, I can maneuver it in the manner which helps me the most. This tool is for everyday use because I use it with almost everybody and very few people know that it belongs to me.”

It is superfluous to add that the devil’s asking price for DISCOURAGEMENT was so high that the instrument never sold. The devil is always in possession of it and he continues to put it to work! [2]

Discouragement is indeed the devil’s handiest tool, for with it, he can shut down the practice of all the virtues, the effort to root out vices, the trust in God expressed in prayer (whether it is obviously “answered” or not — for no prayer is unheard, and no prayer is without effect), and the basic confidence required for carrying on with the work He has put into our hands, however modest or unremarkable it may seem, and however lacking in visible fruits, much less dazzling fruits.

Our Lord did more in His silent hours of prayer than in His public preaching to the multitudes; He accomplished more when He was nailed to the Cross than when He multiplied loaves and fishes. We need to go back, again and again, to His paradoxical example and see that the standards of the world, its notion of success, are not God’s. He triumphs at the moment all else seems to have failed. He does this again and again in salvation history. “He hath shewed might in his arm: he hath scattered the proud in the conceit of their heart. He hath put down the mighty from their seat and hath exalted the humble. He hath filled the hungry with good things: and the rich he hath sent empty away” (Lk. 1:51–53).