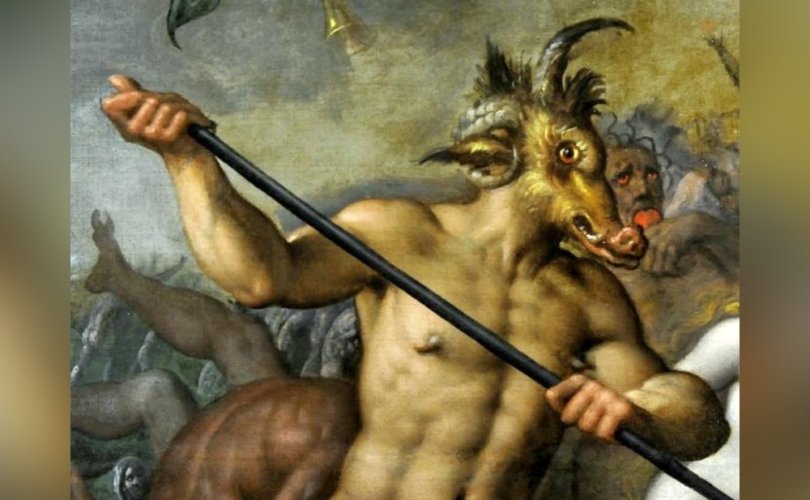 Detail of a 16th-century painting by Jacob de Backer in the National Museum in Warsaw.

November 7, 2017 (LifeSiteNews) — Many readers will have seen this quotation from a letter written by Sister Lucia, the Fatima visionary: “The final battle between the Lord and the reign of Satan will be about marriage and the family. Don’t be afraid, because anyone who operates for the sanctity of marriage and the family will always be contended and opposed in every way. This is the decisive issue.”

Few, however, will be familiar with Pope Siricius (334–399), who described his opponent Jovinian as a tool of “the ancient enemy, the adversary of chastity, the teacher of luxury,” because he had attacked the celibacy of the clergy. Is there a connection between Sister Lucia’s insight and the devil’s age-old campaign against virginity and celibacy for the Kingdom of heaven?

In order to answer this question, we need to look at the devil: who he is, and how he operates.

Lucifer hates consecrated virginity and priestly celibacy because this charism and state of life is the one most intrinsically opposed to the pride that brought about his fall, his eternal loss of beatitude, his damnation. The devil desired to receive beatitude as a reward for his own natural greatness, not as a pure gift of grace undeserved by any creature. He desired to be the “firstborn son” who received the homage of inferior creation—perhaps even to be a mediator between the human race and its Creator.

When God revealed that He Himself would enter into friendship with rational animals, so vastly inferior to the angels, and grant them beatitude; that his own Word would become flesh, passible flesh; that this Word-made-flesh would raise up the human race by suffering and dying for it—Lucifer would not tolerate it. His love of self turned inward. In his pride, he said: Non serviam: I will not serve God, I will not serve such a God, I will not serve such a plan. Lucifer rejected the supernatural in favor of the natural.

The man or woman who chooses virginity or celibacy for the kingdom of God is doing the opposite. In a way, he or she is setting aside the natural in favor of the supernatural. The virgin or celibate is relinquishing that which is most natural to the human being—to live in partnership with another of the opposite sex, finding in this community a friendship and fruitfulness intended for man from the beginning, written into his very bodily nature, as we see in the account of Eve’s being fashioned from the side of Adam and then brought to him as his wife.

Just as nothing is more natural to man than marriage, nothing more supremely testifies to the offering of oneself to God in love than relinquishing it for His sake. The life of the virgin or the celibate is a holocaust in imitation of Jesus Christ, the Lamb of God. As the Word became flesh for our sakes, the consecrated soul makes of his or her own flesh a living word of total consent and surrender to God. The virgin or celibate is the supreme human sign of God’s radically self-emptying redemptive love—and the complete antithesis of Lucifer’s self-inversion.

But as the saints pray without ceasing and generate prayer in others, so the devil, who is a liar and the father of lies (John 8:44), lies without ceasing, and fathers ever more lies in his victims. He persuades people to think that celibacy or virginity is a denigration of marriage, that those who promote this higher state and calling are casting aspersions on the order of creation, the goodness of nature, the beauty of married love. He presents himself, at times, as a defender of these things, but only in a distorted way, as Luther was.

The devil wants the exclusive commitment of priests and religious to the Lord and His people to be diluted or abandoned, so that he can amplify and multiply his own infernal rebellion against the clothing of grace in favor of a naked nature he can call his own—and an army of followers he can call his own, who follow him to the emptiness and frustration of eternally denuded nature. Most of all, however, he sows the lie that man cannot be fulfilled apart from sex, from sexual experience and expression—that humans are maimed and impoverished if they do not enjoy the fleshly presence of another man or woman.

How subtle the strategy of Satan is! The ultimate impoverishment of man is, in reality, to live without God, to live without knowledge of or desire for his eternal communion with God in heaven. Since the priesthood and the religious life are both directly ordered to living out and proclaiming the reality and primacy of the Kingdom of Heaven, it is crucial for the well-being of mankind that priests and religious be unambiguous signs of our ultimate destiny—for in heaven, as Our Lord teaches, there is neither marrying nor giving in marriage. The one all-sufficient marriage in heaven is the perfect union of Christ and His Church.

This marriage of Christ and the Church has two special signs on earth that point to it: the sacrament of matrimony and the sacrament of the Eucharist. Therefore the devil attacks both of them.

He attacks marriage by undermining the goods of marriage: offspring (through contraception and abortion), fidelity (through fornication and adultery), and sacrament (through divorce and pastoral practices that countenance divorce).

He attacks the Holy Eucharist, which is the fleshly presence of the Savior and fully capable of satisfying our hunger for love in this life, by attacking the sacred liturgy, by tempting people to make it into an anthropocentric, horizontal self-celebration through which its very meaning is undermined, even if the sacrament may still have been effected.

Thus, the devil’s strategy is multifaceted.

He works to undermine the indissoluble covenant of marriage, which is the sacramental sign of the indestructible and superabundantly fruitful union of Christ and His Church. The contemporary war against marriage is also, indeed more deeply, a war against the nuptial union of Christ and the Church—a vain but frenzied effort to erase from the minds of men any memory of this glorious union consummated on the Cross.

He works to undermine the Most Holy Eucharist, which is the sign and cause of our communion with Christ and our highest participation in His self-oblation on the Cross.

He works to undermine the priesthood and religious life, which exemplify and effectively bring about in this world the ordering of all creation, through Christ, to the Father, who is the beginning and end of all things. The common element in all these attacks is the devil’s fury that anyone or anything natural should ever be subordinated to that which is supernatural—that a faithful, radical self-sacrifice should be the path of salvation and blessedness.

Editor's note: This reflection will be completed next week. Stay tuned.