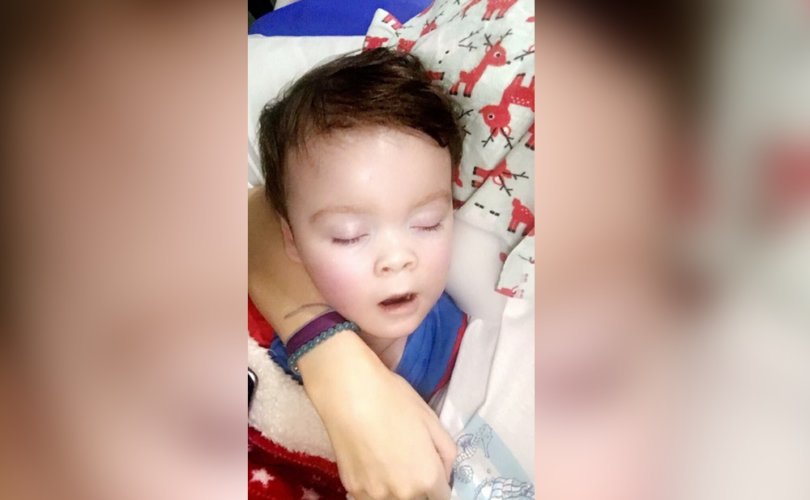 Alfie Evans breathing on his own on April 23, 2018.Facebook

Alder Hey wouldn’t let them, and a legal battle ensued over whether Thomas and Kate could decide their son’s course of care, or whether the hospital had the right to yank Alfie’s life support.

Ruling after ruling ignored Alfie’s parents’ basic right to care for their son and take him elsewhere for treatment.

Then, the case became about whether Alfie had a right to continue living and being cared for at all, or whether it’s in his “best interests” to die.

Pope Francis voiced his support for little Alfie. Italy made him a citizen so he could be airlifted there, where doctors are ready to treat him.

The toddler did an extraordinary thing – he breathed on his own for 13 hours, defying doctors’ predictions and proving that he indeed does want to live and intends to keep living.

But the British legal and medical systems are so determined to see little Alfie die that they won’t even let his parents take him home, let alone to another hospital or out of the country. After a night of breathing on his own, a judge still insists that Alfie must die, and so now he’s being starved inside Alder Hey, surrounded by armed police to ensure no one can give him his basic human right to nourishment.

Why can’t Alfie’s doctors and Justice Hayden just admit they were wrong? Is their pride so great that they would allow an innocent boy to be starved just so their initial judgments about his medical condition are not proven wrong?

Alfie’s situation has escalated from hospital incompetence and gross disregard for parental rights into a crime against humanity that has what was once one of the most “civilized” countries in the world using its totalitarian, unchecked, and brutal government power to turn a hospital room into a 23-month-old’s starvation chamber.

Every person who has been complicit in preventing Alfie’s parents from taking their son – their own freaking son! – should be put on trial for crimes against humanity. The judge who’s continually ignored common sense and decided a hospital should execute a sick little boy even though the world wants to help him live, the doctors and nurses who think they have a right to someone else’s baby, and the armed guards standing outside Alfie’s door right now to facilitate his starvation should face a Nuremberg trial for their evil acts.

If these wicked bureaucrats succeed in starving little Alfie, they may never be brought to justice for it in this life. But they certainly will have to answer for it in the next.