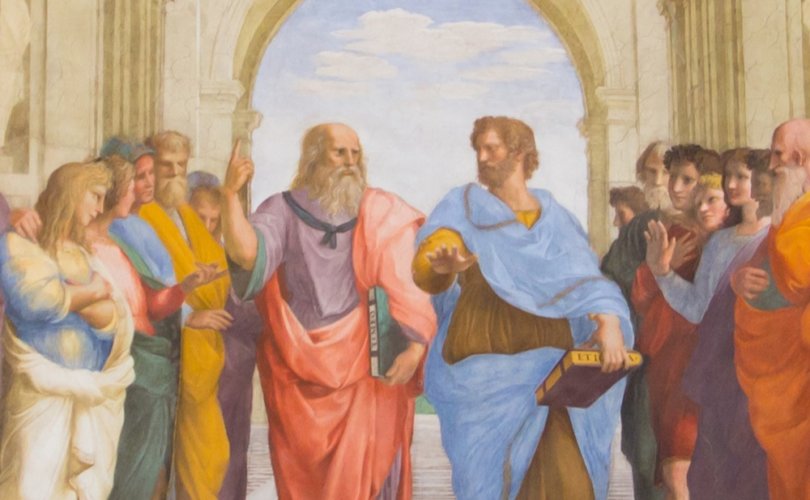 January 30, 2018 (LifeSiteNews) – As I was preparing a reading from Aristotle for a philosophy class, I couldn’t help but be struck by the words of this pagan thinker:

Not every action or feeling admits of a mean. For some have names immediately connected with depravity, such as spite, shamelessness, envy, and, among actions, adultery, theft, homicide. All these, and others like them, are so called because they themselves, and not their excesses and deficiencies, are bad. In their case, then, one can never hit the mark [of virtue], but always misses. Nor is there a good or bad way to go about such things—committing adultery, say, with the right woman, at the right time, or in the right way. Rather, doing one of them, simply speaking, is to miss the mark. (Nicomachean Ethics, Book II, ch. 6)

Aristotle, who lived over 300 years before the coming of Christ and had not the benefit of divine revelation, is arguing here that certain free human actions are intrinsically evil. No circumstances or excuses can ever make them good.

When the apostles met for the first synod in Church history (it is not numbered among the ecumenical councils, being a sort of protocouncil or model for the rest), they debated the question of whether Gentile converts needed to observe the Mosaic law. Their conclusion? No, they need not follow the ceremonial precepts, but they do need to observe a couple of simple precepts—one of which was to “abstain … from fornication [or, as other translations have it, unchastity]” (Acts 15:20). As if to say: The very baseline, the lowest common denominator, is to avoid sharing a bed with someone to whom you are not married. This is by no means presented as the worst sin, nor its avoidance as the height of virtue. It is, however, treated as a sine qua non, a minimal adherence to the natural moral law that must be demanded of everyone who dares to call himself a Christian.

But when is the last time you have heard fornication, unlawful sexual activity, preached against from the pulpit? Apart from a few brave pastors who are willing to risk their careers instead of hiding the truth, the Church, at least in the modern West, has completely and utterly lost its conviction and courage when it comes to this elementary point of biblical revelation.

What we see, then, is that the best of the pagans and the best of the Jews (that is, the early Christians) saw clearly that the virtue of self-control in sexual matters was fundamental to a good and holy life, and that those who depart from this are incapable of being counted among practicing Christians. It is no less clear that there has never been the slightest doubt in Catholic tradition on this point. Whatever we may think of his at times over-enthusiastic popularizers, Pope John Paul II in works like Love and Responsibility and Male and Female He Created Them gave eloquent expression to the moral beauty, psychological value, and theological meaning of chastity, a virtue all are required to live out in any state of life, be it single, married, clerical, or religious.

It is no less clear that chapter 8 of Pope Francis’s Amoris Laetitia departs from pagan wisdom and Judeo-Christian orthodoxy by teaching that couples living in sexually active so-called “second marriages” (while their sacramentally married spouse is still alive) need not be considered to be living in a state of sin, and may even be considered to be doing what God is asking of them, thereby allowing access to sacramental absolution and communion. According to this warped way of speaking, they may be acting virtuously by cohabiting extramaritally, and even pleasing God in so doing. Both pagan philosophers and Christian believers have always known better than this, and spew out such error, which is contrary to both reason and faith.

The view that keeping up adulterous sexual relations is the best that a certain person is capable of doing in some circumstances is seen to be fallacious when we consider it in connection with any other mortal sin. Is the abortionist who says “The best I can do right now is to kill only ten babies a week, which is better than a hundred,” ready to receive communion? Is the one who says “The best I can do is steal one candy bar a week, which is better than one every day,” or “I used to skim off a fair amount of incoming cash from my company in a clever way that no one ever noticed; but I felt badly about that, so today I just take a little now and again to pad the wallet,” ready to receive absolution? What these people have in common is that they are still attached to serious sins—it requires no special psychological insight, no advanced degree in theology, and no hierarchical office to see this. First, they have to work, pray, do penance, and take counsel about overcoming their bad habits once and for all, for real. The sacraments are not “magic,” as the progressives like to say (when it suits them). Sacraments do not, cannot, substitute for practices by which vices are overcome and the soul prepared for readmission to the communion of the Church, such as prayer, fasting, almsgiving, and other penances.

The exception made for adultery derives from the assumption of hedonism as a non-negotiable default in Western society—the same reason exceptions are made (in varying degrees) for other intrinsically evil actions contrary to the virtue of chastity such as masturbation, fornication, contraception, abortion, homosexual relations, pedophilia, and pornography. These actions are intrinsically evil from natural law, not only from supernatural revelation, which means that human beings both can know them to be such and ought to know them to be such. Put simply, any human being is culpable before God for not knowing the natural moral law and living according to it. St. Paul in Romans teaches that it is on this basis, at least, that all men will be judged at the end of time, with a reckoning of whether or not they have lived up to the “law written on their hearts” (Rom 2:15).

The modern perspective, on the other hand, while paying lip service to the truth that Christ calls us to renounce every sin in our striving to be holy, treats the use of the sexual organs as if it were a special case. Actions in this sphere are viewed as either not evil at all or as evil but uncontrollable and excusable. In our hypersexualized society, some psychiatrists will even argue that it is not possible to be “healthy” without frequent sex, and that virginity, chastity, and continence are defects rather than perfections—an irrational “faith” that has so far proved remarkably resistant to mountains of contrary evidence, both statistical and anecdotal.

As R. R. Reno of First Things argued, the debacle over chapter 8 of Amoris Laetitia is an unmistakable sign that the Sexual Revolution has finally conquered the minds of many members of the Church’s hierarchy. They would not dream of preaching against sex before marriage or contraception, because “that’s how things are nowadays.” They try to find the “positive values” in it. Would the same leaders counsel us not to preach against trashing the natural environment or setting up Third World sweatshops because “that’s just how things are done nowadays”? Would they try to find the “positive values” in pollution and exploitation? Of course not. Social justice is real, but it also happens to be fashionable; it wins the applause of the world. Sexual justice is real but no longer fashionable. Indeed, it is bitterly hated, ridiculed, and suppressed by all who set themselves up as arbiters of modern culture.

Christians, however, do not take their marching orders from the world, but from the Lord and His apostles. “This is the will of God, your sanctification: that you abstain from unchastity; that each one of you know how to take a wife for himself in holiness and honor, not in the passion of lust like heathen who do not know God; that no man transgress, and wrong his brother in this matter, because the Lord is an avenger in all these things, as we solemnly forewarned you. For God has not called us for uncleanness, but in holiness. Therefore whoever disregards this, disregards not man but God, who gives his Holy Spirit to you” (1 Thes 4:1–8).

Peter Kwasniewski, Thomistic theologian, liturgical scholar, and choral composer, is a graduate of Thomas Aquinas College in California (B.A. Liberal Arts) and The Catholic University of America in Washington, DC (M.A. and Ph.D. in Philosophy). He taught at the International Theological Institute in Austria and the Franciscan University of Steubenville's Austria Program, then helped establish Wyoming Catholic College in 2006. There he taught theology, philosophy, music, and art history and directed the choirs until leaving in 2018 to devote himself full-time to writing and lecturing.

Today he contributes regularly to many websites and publications, including New Liturgical Movement, OnePeterFive, LifeSiteNews, Rorate Caeli, The Remnant, and Catholic Family News, and has published ten books, including four on traditional Catholicism: Resurgent in the Midst of Crisis (Angelico, 2014, also available in Czech, Polish, German, Portuguese, Spanish, and Belarusian), Noble Beauty, Transcendent Holiness (Angelico, 2017), Tradition and Sanity (Angelico, 2018), and Reclaiming Our Roman Catholic Birthright: The Genius and Timeliness of the Traditional Latin Mass (Angelico, 2020). His work has been translated into at least thirteen languages.

Kwasniewski is a scholar of The Aquinas Institute in Green Bay, which is publishing the Opera Omnia of the Angelic Doctor, a Fellow of the Albertus Magnus Center for Scholastic Studies, and a Senior Fellow of the St. Paul Center. He has published over 1,200 articles on Thomistic thought, sacramental and liturgical theology, the history and aesthetics of music, and the social doctrine of the Church.