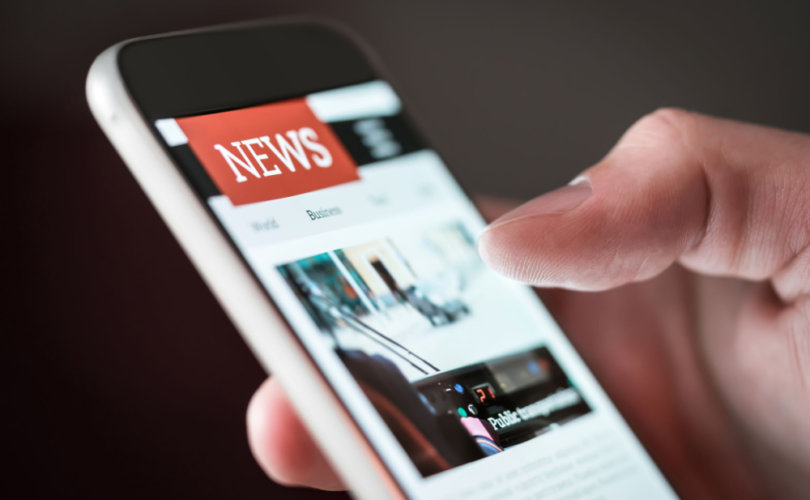 Yes, you too, are part of the LifeSite family, not just all those who work directly on writing, publishing and everything else it takes to get these articles and videos out every day.

The Fall Campaign has now passed the 50% mark toward the $500,000 goal. Yes! Please keep it up. You are taking us there and we are excited.

Join in with all the others now donating as we near the end of the campaign on Friday to reach the minimum needed for our operations over the next three months.

What a Tuesday it was! At the time of this writing Tuesday evening, our videos on Rumble were suddenly disappearing and then reappearing. It started just as we uploaded an exclusive video interview with the great Dr. Robert Malone.

In that interview conducted by Lifesite’s Jim Hale, Dr. Malone states, “’The monopolist’ Bill Gates has his ‘tentacles’ everywhere and has vast influence together with his globalist allies in the world of medicine and beyond that cannot be overstated.” Malone, in Part One of an extensive, personal and frank interview, also addresses the very painful issue of how fellow conservatives have accused him of serving the New World Order, and the toll the exhausting fight for freedom and these criticisms have taken on his personal life and family. Make sure to watch Part One of the series.

The Mark Houck FBI arrest story has been exploding and has become a prominent national story. Having first broken this story, LifeSite is continuing to monitor developments in this crucial case.

Houck is the pro-life leader and Catholic father who pleaded not guilty to federal charges after the FBI raided his home. “This is a political prosecution,” his lawyer, Peter Breen of the Thomas More Society, said. “And what’s clear from the Department of Justice at its highest levels, which is directing this case, [is] that they are trying to send a message to pro-life and people of faith: ‘Don’t mess with us.’”

“They want to intimidate — they want to cause good people like Mark to stop praying and counseling at the abortion clinics of our country,” the attorney said.” And that’s not going to happen.” Breen argued the Biden administration’s DOJ treated Houck “as if he was a drug lord or a mafia boss.” “If he was truly a danger to the community, they wouldn’t have waited a year to prosecute,” he said.

In the second article, a former FBI chief blasted the politicized Justice Department for authorizing the FBI raid.

In the third article, LifeSite’s Patrick Delaney, the main LifeSite journalist covering this story, wrote that the FBI raid on Houck is part of the Biden admin’s terror campaign against conservative Christians. There is a widely used term for the utilization “of violence or the threat of violence, especially against civilians, in the pursuit of political goals.” That term is “terrorism.” And we also have a word for individuals and organizations that utilize terrorism as an intentional method in pursuit of their pollical ends. They are called “terrorists,” Delaney wrote.

In the fourth and last article, we report new information on the pro-abortion activist who accosted Houck’s son. His original complaint against Houck over the incident, which occurred a year ago, was dismissed after the person neglected to show up for the original hearing and Houck did.

“So, we’re dealing with accusations from a 71-year-old who was previously arrested on multiple drug charges, pled guilty to one, pled guilty to disorderly conduct, and was involved in lawsuits about the side effects of his antipsychotic medication,” summarized an attorney who helped analyze the documents. This was said to be “something that the media probably won’t normally discuss.” Anyway, notice that the FBI raid occurred over a very minor incident that occurred A YEAR AGO. What on earth is going on here?

It has been becoming quite apparent that former Trump Justice Dept. Attorney General William Barr is not the person that most conservatives were led to believe he was and is. William Barr deceived America when he suggested widespread evidence of fraud could not be found in the 2020 presidential election, according to former Trump Department of Justice official Jeffrey Clark.

It is a wonder that Trump managed to govern at all with so many traitors surrounding him for those four brutal years of constant attacks and betrayals, and yet he did manage to accomplish a great deal despite it all. Amazing.

Bravo for Marjorie Taylor Greene, who has introduced a bill to ban transgender surgeries and puberty blockers for minors. The bill would designate giving “gender-affirming care” to minors a class C felony offense, with penalties of 10 to 25 years in prison for doctors who provide “gender-affirming” surgeries and drugs and up to $250,000 worth of fines. Wow! That is also amazing. It proposes penalties entirely appropriate for this evil abuse and exploitation of minors.

Archbishop Carlo Maria Viganò today presents wise caution and praise for the Italian people having rejected globalism in the recent election. The wise, experienced prelate who at one time was the third highest person in the Vatican and in charge of all the church’s nuncios, or ambassadors, around the world has a far better understanding of the realities of complex Italian politics and culture and geopolitics than most others in positions of authority.

Viganò emphasizes in his letter on LifeSite that now Prime Minister Giorgia Meloni must deliver. “We know that today’s politicians do not have the gift of honoring the commitments they have made to their electorate. Can we reasonably think that Giorgia Meloni will want to review her (previous) pro-globalist position, returning to the role of being a true right-wing alternative to the woke left? The letter is a powerful, deep tour de force.

Kenya enforces its ban on LGBT content in films and warns against use of a Chinese contraceptive pill. Christopher Wambua, acting CEO of the Kenya Film Classification Board (KFCB), said in an interview on Friday that any film containing LGBTQ content is illegal in Kenya and cannot be marketed or broadcast within the country.  “If there is any content that normalizes, glorifies same-sex relationships, our position in Kenya has always been to restrict and not to broadcast, exhibit, or distribute that kind of content within the borders of the country.” We cannot imagine such a truly Christian policy of concern for the moral, spiritual and social welfare of citizens being implemented anymore in the long post-Christian, morally corrupted developed nations.

New World Order zealot and tyrant, New Zealand PM Jacinda Ardern, compared ‘misinformation’ to a ‘weapon of war’ in her Orwellian UN speech. Ardern said that “a lie online or from a podium” might not kill people like previous weapons, but eventually it could be as dangerous. This woman, who caused enormous grief with her heartless, brutal Covid policies, is herself dangerous to the people of New Zealand. What she is proposing is totalitarian control of speech and thought. We should all pray she is never again elected to office.

Now the ugly truth is coming out about those costly electric cars that globalists insist will be the only vehicles permitted to be owned or used in the near future. In an article Tuesday, you learned the shocking reality that the elites’ war on gas-powered vehicles threatens to devastate rural America and developing nations.

We revealed that Pope Francis is clearly more interested in not offending Communist China than in defending Cdl. Zen who has been arrested and under trial in by a Communist court. Zen may one day be declared a saint. As for Francis, well….

Investigative reporting by Michael Hichborn on the Campaign for Human Development (CCHD), funded by the US bishops, revealed that the far-left “Catholic” agency has given millions of dollars over the years to organizations that promote abortion, contraception, homosexuality and Marxism.

A federal court in Texas is giving the Centers for Disease Control and Prevention until Friday to release the first batch of data on adverse events after COVID-19 vaccinations collected by the agency via its V-safe app. This is a big, positive deal, and like previous similar orders to federal agencies and drug companies, is likely to produce documents exposing serious and possibly criminal negligence on the part of the agency that many are already demanding to be shut down for being a threat to the nation and to international bodies that have been following its frequently flawed or corrupt directions.

Those are some of the Tuesday news highlights – all of them are important and necessary to report. And there are many more that have not been mentioned.

If you value this reporting, a donation toward the daily efforts of the LifeSite team and the many large expenses involved in producing and disseminating this news would be greatly appreciated.

To donate, just follow through on this link: give.lifesitenews.com/

Steve Jalsevac
On behalf of the entire LifeSiteNews team