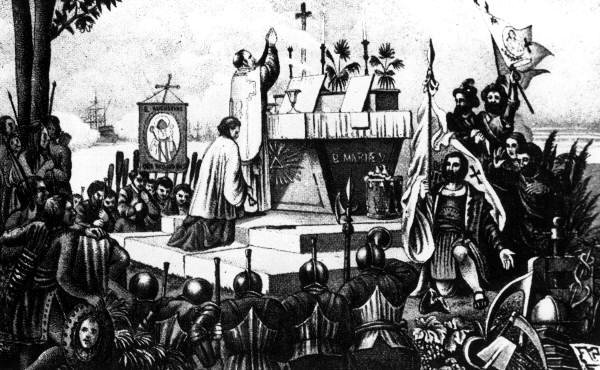 Artistic depiction of the first Mass celebrated in St. Augustine, Florida, in 1565State Archives of Florida

ST. AUGUSTINE, Florida (LifeSiteNews) — The first Thanksgiving in the United States does not go back to Plymouth Rock in 1620, but rather to Spanish Catholics in 1565 in St. Augustine, Florida.

The town, named because the area was first spotted on the feast day of St. Augustine, is the site of the country’s first Thanksgiving.

“On September 8, 1565, with much pomp and circumstance and 600 voyagers cheering, [Spanish military leader Don Pedro Menéndez de Avilés] set foot on the shores of Florida. In honor of the saint whose feast day fell on the day he first sighted land, Menéndez named the colonial settlement St. Augustine,” according to a historical brief on the city’s website.

“Menéndez quickly and diligently carried out his king’s instructions. With brilliant military maneuvering and good fortune, he removed the French garrison and proceeded to consolidate Spain’s authority on the northeast coast of Florida,” the city’s website explains. “St. Augustine was to serve two purposes: as a military outpost, or Presidio, for the defense of Florida, and a base for Catholic missionary settlements throughout the southeastern part of North America.”

Like good Catholics, these troops celebrated that day with a Mass of thanksgiving. And it being 1565, the first Mass was a Traditional Latin Mass said ad orientem (facing liturgical east).

“Father López came to Florida in 1565 as the chaplain of Pedro Menéndez, and became the first pastor of St. Augustine,” the University of Florida’s museum website explains. López “celebrated the first Mass in the colony, an event that marked the formal establishment of the town. López was accompanied by three other secular priests, including Rodrigo García Trujillo and Pedro de Rueda.”

“The role of the secular priests was to minister to the spiritual needs and well being of the Spanish colonists, while conversion and missionization of the Indians were undertaken by members of the regular orders (in the case of Florida, Jesuits and Franciscans),” the website explains.

“The colonists erected a makeshift outdoor altar, decorated and furnished it, and then gathered around [to celebrate] Mass,” Catholic author Thomas Craughwell wrote in the National Catholic Register. “Members of the Timucuan tribe were drawn to the beach by the arrival of the strangers and then stayed to watch the Mass. Afterward, the Spanish invited the Timucuans to join them in a feast to thank Almighty God for their safe arrival.”

The violence at the time cannot be ignored – the Spaniards were there to conquer the Calvinist French Huguenots. As violence and bloodshed were unfortunately norms for the time, the “good feelings came to an end quickly,” Craughwell noted. “[King Philip II of Spain] authorized Menéndez to exterminate the unauthorized colony. Menéndez’s expedition killed 130 men, sparing only the women and children.”

“A few weeks later, Timucuans reported that a couple hundred shipwrecked Frenchmen had washed up on a nearby beach and were walking north,” he wrote. “Once again, Menéndez led out his forces and massacred these Frenchmen, too.”

“Colonial America could be a very bloody place,” Craughwell wrote.