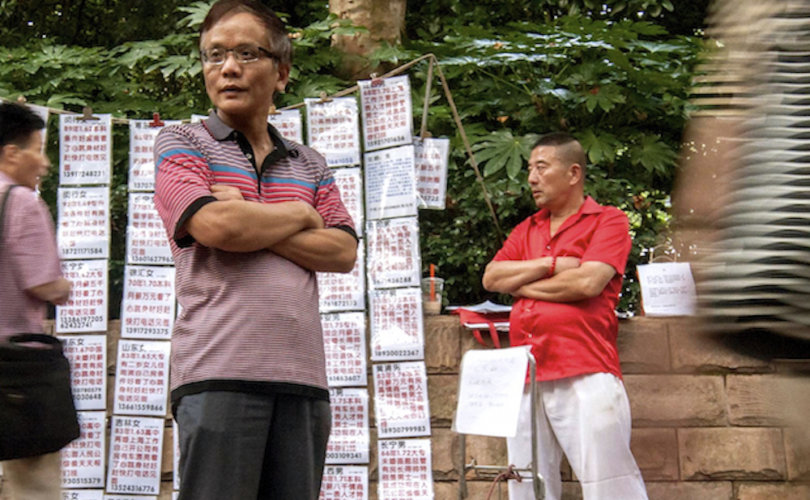 October 9, 2017 (LifeSiteNews) — It’s a story so gross we were unsure we wanted to print it. But I volunteered because it reminded me of a conversation I had with my mother long ago. The conversation, like the story, was about what China’s one-child policy would do to women. Neither one of us imagined it meant real human women would be replaced by lifelike sex dolls, however.

China’s coercive diktat that couples could have only one child came into effect in 1980. I was too young to understand how a couple, let alone a government, could prevent more than one baby from arriving, but I thought I understood how scarcity worked. If, as my mother darkly predicted, China would soon find itself with millions upon millions of more boys than girls, surely — I thought — that would make girls, like rare gems, more valuable.

“Not in the way you think,” said my mother, or words to that effect. She told me that it was more likely that the women would find themselves much more restricted. I thought she meant that they wouldn’t be allowed to travel, for fear they would find husbands abroad. But now I understand that she meant Chinese women would find themselves reduced to their sexual utility. When men fight over women, it’s not for the women’s career potential.

Pulitzer Prize winner Mei Fong, a Malaysian-American of Chinese descent, went to China to investigate the effects of its population control policies. The result was her book “One Child: The Story of China’s Most Radical Experiment”. Fong wrote about forced abortions, forced sterilizations, babies kidnapped for adoption, and the anguish of parents who had lost their only living child to accident, disease or natural disaster. (A new word has been invented for such parents — shidu (literally, “lose only”). There are a million shidu now in China, and their ranks swell by 76,000 a year.)

Fong also visited a sex-doll manufacturer, having a “hunch” that here could be found another result of the one-child policy that robbed China of baby girls. In 2016, she was proved correct: sales of newly affordable, lifelike sex dolls took off. One supplier sold 500 of them on China’s “Singles Day.” The average buyer of sex toys in China is a man age 18 to 29: exactly the demographic that has been robbed of the friendship and love of real women by the short-sighted “one-child” policy.

There will be 30 million more men than women in China by 2030, but China is already a world leader in human trafficking. Women from Burma, Vietnam, and North Korea have been recruited or kidnapped to work in Chinese brothels or be sold to poor Chinese farmers. Fong writes that a Vietnamese bride can make her trafficker up to $18,500. Some of these foreign women may intend honest marriage, but like their new husbands, they fall victim to crooked marriage brokers, who sell them from village to village.

The damage to these women and women’s dignity is obvious, but China’s men have also been hurt. Chinese bachelors are “demonstrating lower self-esteem and higher rates of depression and aggression,” she writes, and this has led to a rise in violent crime. Fong only glancingly mentions men’s loneliness and the humiliation of remaining unmarried and childless in China’s ancestor-worshipping society: She describes a robot manufacturer who went through a form of marriage with his own lifelike, if lifeless, creation.

Those who forget history are doomed to repeat it, and I fear for those who live along China’s borders. The thought of 30 million aggressive men with no access to women reminds me very strongly of the story of the Rape (i.e. theft) of the Sabine Women after the founding of Rome.

The interesting thing about the Roman legend, however, is that the Sabine Women — unlike sex dolls — had voices and — unlike frightened, abused trafficked women — had agency. According to the story, the Romans treat the Sabine women not as slaves or prostitutes but as sacred wives, and when the Sabines’ avenging fathers and brothers finally come to their rescue, the women stop the fighting. They speak up for their new family ties, citing the affection they now have for their husbands and their children.

Obviously, I am not advocating a return to antiquity’s border raids for women although I fear they are inevitable. (Indeed, they are already happening.) China has already ended the one-child policy, but that has come too late for the projected 30 million bachelors, the millions more dead fetuses, and the growing number of bereaved shidu. Clearly, the Chinese government should put a stop to human trafficking and invite women to immigrate to China. Once upon a time, a similar policy worked for Canada.

However, a woman would have to be desperate to want to move to a country that has committed — and still commits today — such terrible crimes against its men and women as gendercide, forced sterilization and forced abortion. Violently enforcing a “two-child” policy when so few people choose to have more than two children anyway is not only cruel, it’s stupid. And the sex trade, whether in real women or in hi-tech facsimiles, is certainly no advancement in the flourishing of Chinese families.

It’s sad that the legacy of the one-child policy will be felt for generations. Not only has a generation of Chinese people been robbed of their brothers and sisters, 30 million of them have been robbed of the transformative experiences of having (and being) a sweetheart and spouse.